No, this is not a testimony to the energizer bunny, but rather the pitching/catching battery of Eldred senior hurler Dana Donnelly and senior catcher … 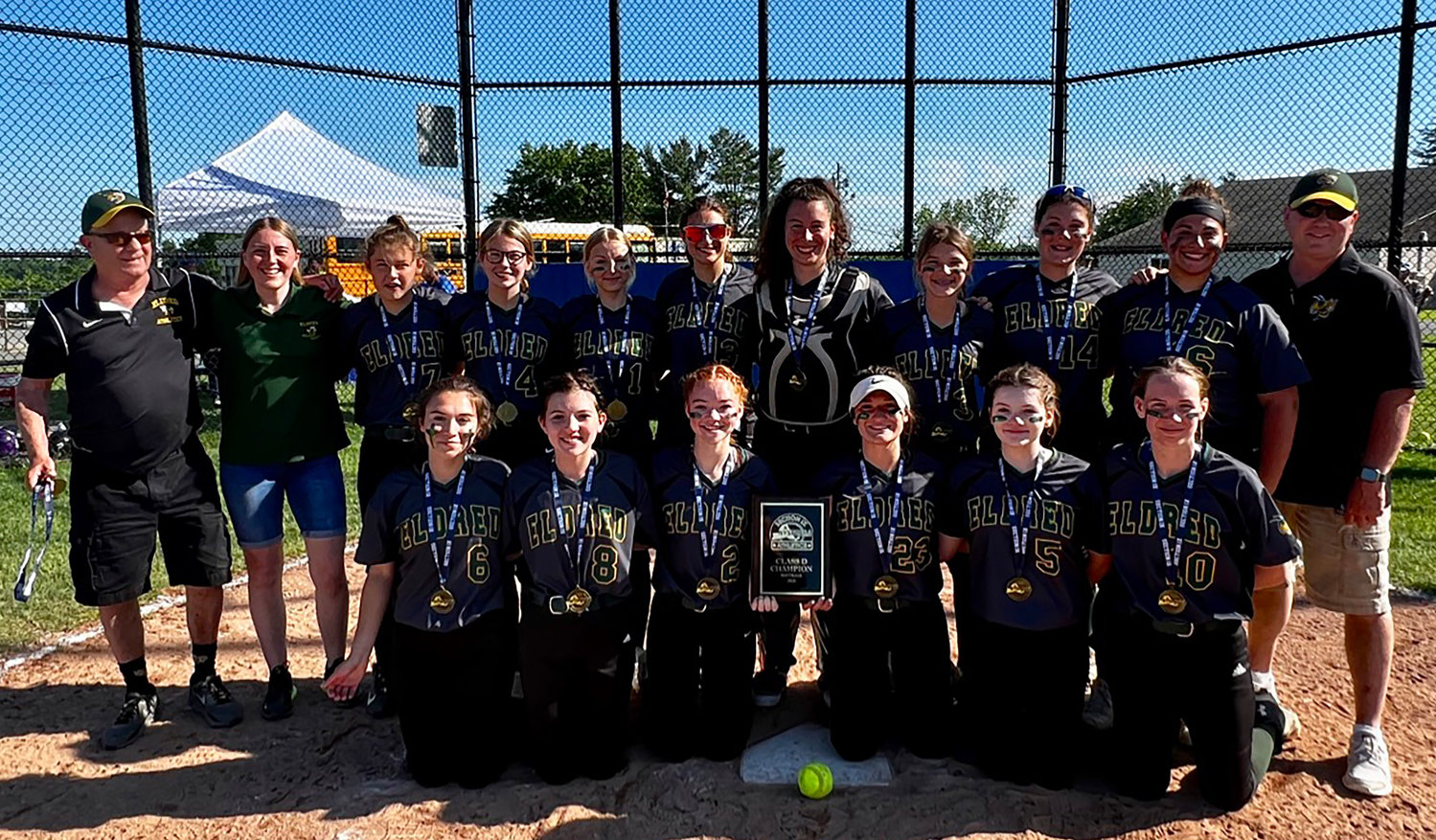 Section Nine Champion Eldred Lady Yellowjackets pose with their plaque and their coaches Rick Whitney (left) and Mike Donnelly (right), after defeating Livingston Manor 8-0 in the title game. The win propels The Lady Yellowjackets back to the state regional quarter final to face long-time nemesis and defending champion Deposit/Hancock.
Richard A. Ross | Democrat 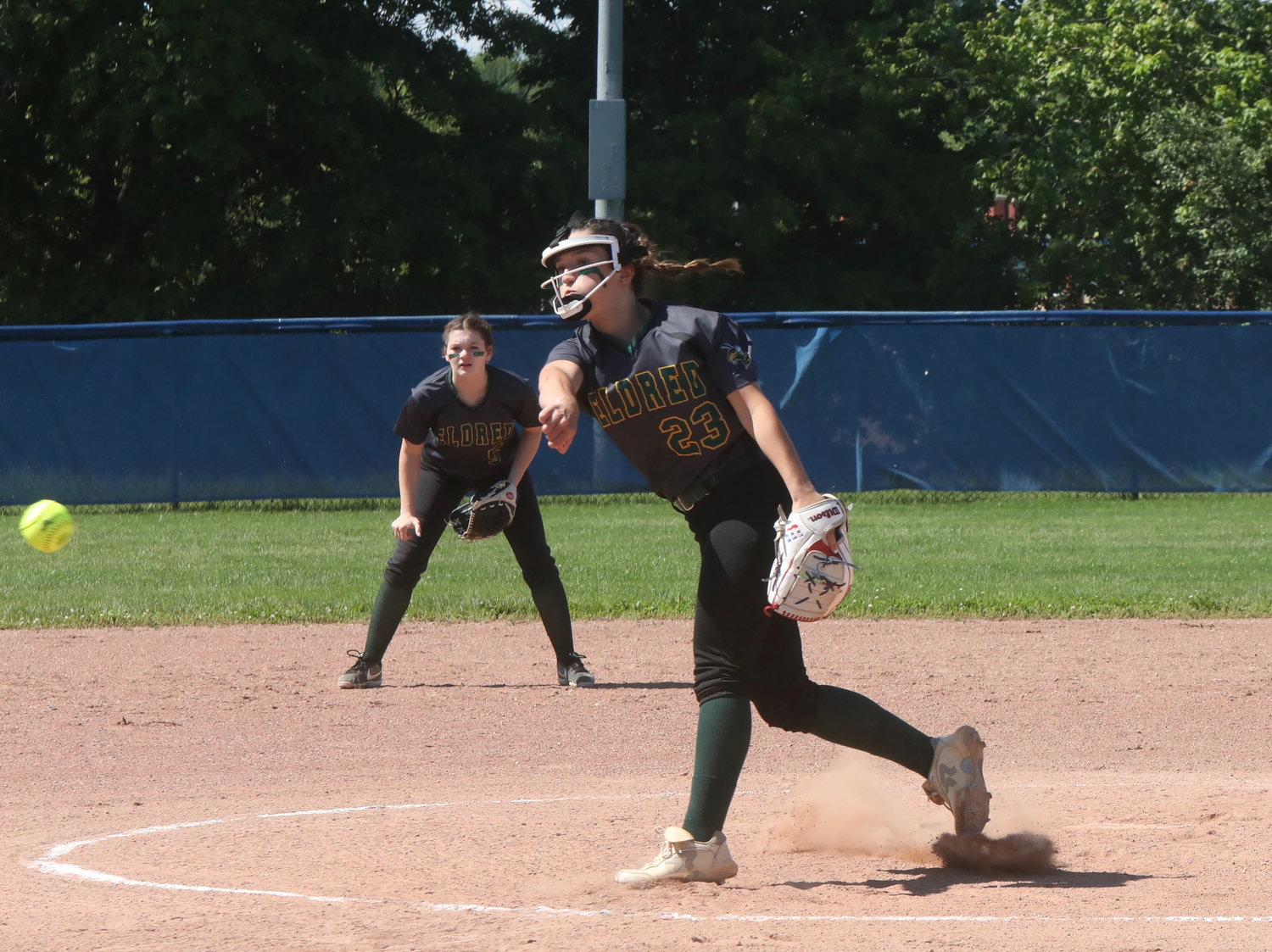 Eldred senior hurler Dana Donnelly fires her patented drop curve ball for a strike in the early going. She struck out 12 batters and allowed just one hit. Her season strike out total burgeoned to 112 in just 14 games as Eldred’s record improved to 12-2. Donnelly was also active with her bat including a triple in the first inning. She scored as slugger Lily Gonzalez reached first on a throwing error.
Richard A. Ross | Democrat 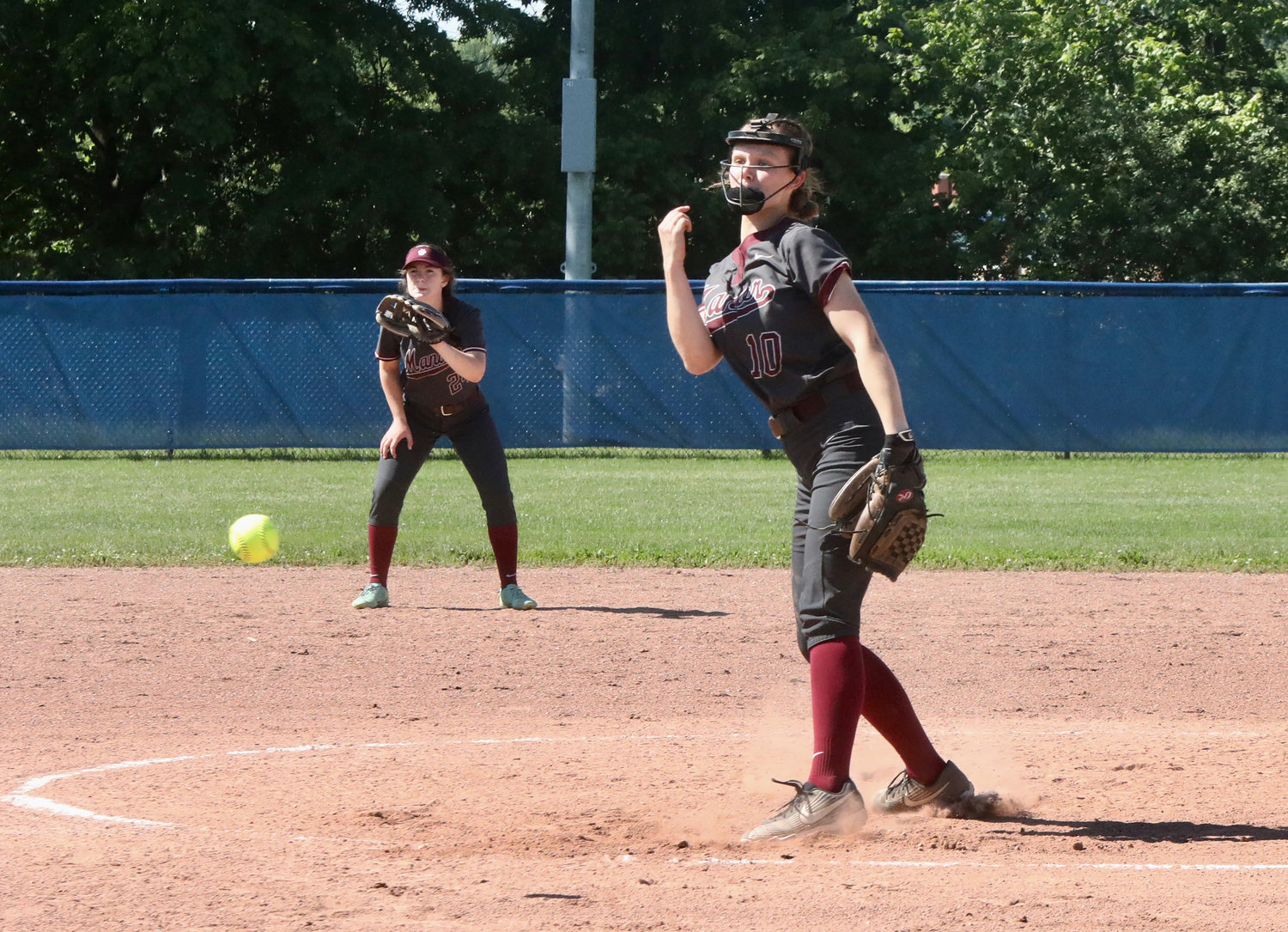 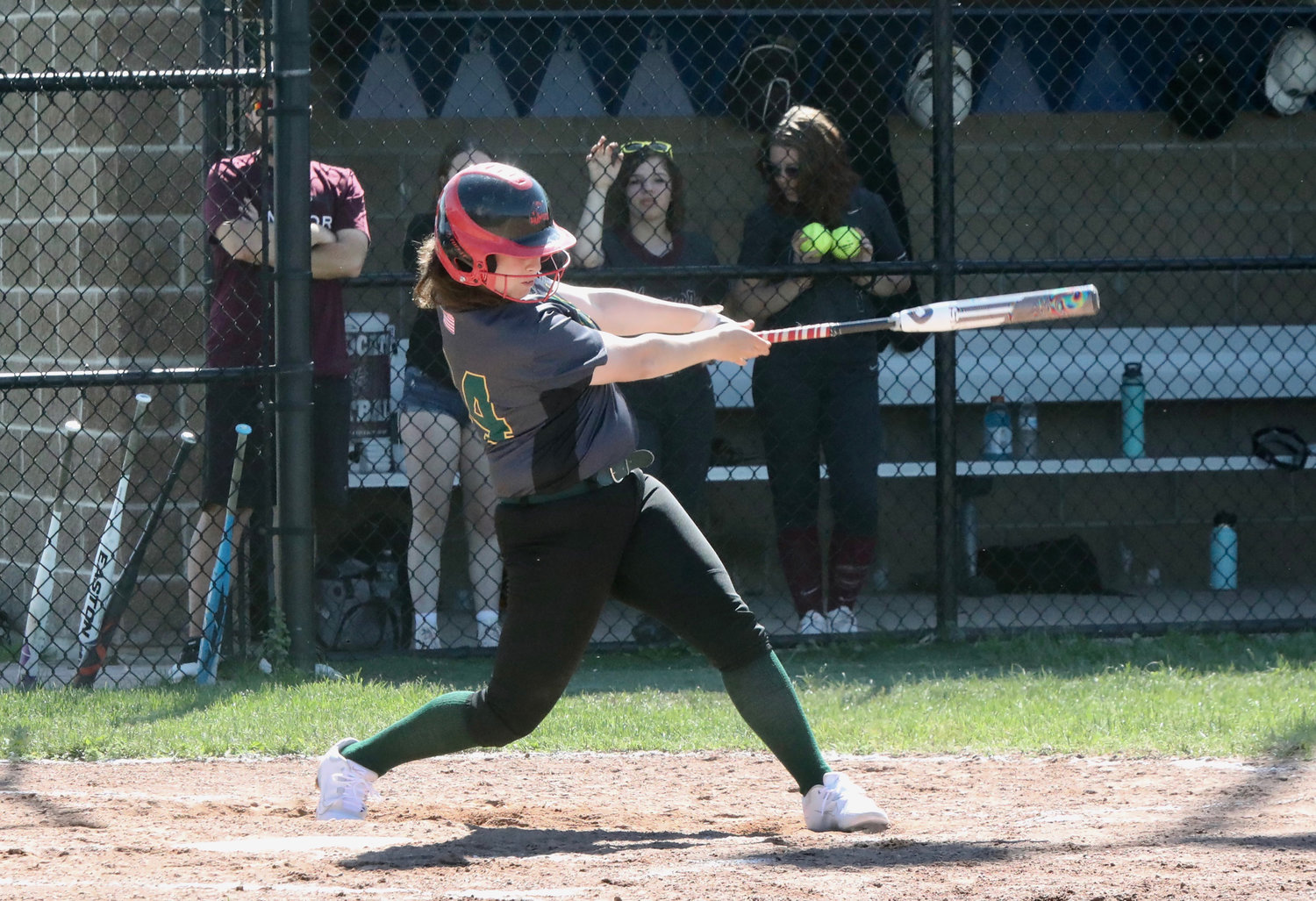 No one better. Eldred’s Lily Gonzalez reached base on all four of her at-bats. She had two RBIs in the game.
Richard A. Ross | Democrat
Previous Next
Posted Friday, June 3, 2022 6:20 am
Richard A. Ross

No, this is not a testimony to the energizer bunny, but rather the pitching/catching battery of Eldred senior hurler Dana Donnelly and senior catcher Lily Gonzalez. The duo has been the most consistently salient elements in Eldred’s dominance of Section IX Class D softball for the past five years. Lest anyone doubted that, Donnelly’s masterful 12-strike out, one hit gem, and the combined hitting of the duo highlighted Eldred’s 8-0 Section IX Class D title win over division rival Livingston Manor.

The victory propels Eldred forward to take yet another crack at trying to topple powerhouse, four-time NYS champion Deposit/Hancock in the state quarterfinal tomorrow. For these two veterans, it’s their last chance to break through that glass ceiling that has been put in place by the Lady Lumberjacks during Eldred’s longstanding Section IX reign.

The Lady Yellowjackets’ Section Nine supremacy has verified Eldred’s winning pedigree since 2015. That winning streak that began with five consecutive years was put on pause in the 2020 season due to the Covid-19 pandemic. Last year, Eldred was unopposed in the Section IX realm and got its sixth title by default but there were no state rounds played. This year’s team comprised of players who, with the exception of Donnelly and Gonzalez, had not yet competed in a Sectional championship, got the savory taste of victory in a game in which Eldred handily overpowered the Lady Wildcats. It was the third time this season that Eldred triumphed over Manor.

With her flaming drop curve ball, incisive pitch location and an occasional baffling change up, Donnelly was nothing short of masterful on the mount, allowing a lone first inning single to Kristina Davis and just one other base runner courtesy of Eldred’s lone error, before retiring the final 18 batters in the game. At the plate, Donnelly got things started with a first inning triple. Gonzalez, who reached base on all four of her at-bats, arrived safely, bringing Donnelly home on a throwing error from shortstop Davis that pulled first baseman Jillian Carlson off the bag. That solo first inning run turned out to be followed by crooked numbers in the second third and sixth inning as Eldred amassed 12 hits off of a superb pitcher in Manor’s Mackenzie Carlson whose eight hitter, ten K outing was masked by Manor’s commission of four errors combined with Eldred’s lively bats.

Donnelly’s 12 K’s brought her season total to 108, a number made even more impressive by Eldred’s playing just 13 games in the regular season instead of the 22 they had on the schedule. This victory brought their record to 12-2, their only losses coming against Port Jervis and S.S. Seward.

Manor, which finished its campaign at 6-7, had played Eldred close in the first game, a 6-4 Lady Yellowjackets’ win in which Lady Gang Green committed errors to abet Manor’s cause. The 16-0 Eldred home win came as Carlson couldn’t adjust to the hard packed Eldred mound and, of course, Eldred’s relentless hitting up and down the line up.

Donnelly was three-for-four at the plate and Lily Gonzalez with three-for-three in addition to reaching on that first inning throwing error. Lindsay Zgrodek was two-for-four and Olivia Gonzalez was three-for-four with three RBIs. Eldred led 3-0 after three innings and 6-0 after four. They plated their final two runs in the bottom of the sixth inning. This is Coach Rick Whitney’s final season and he was clearly proud of the team. “We’ve had our issues with the pandemic and it is really special to go out with them this year. This is very emotional. Dana pitched one heck of a game and the team really rose to the occasion. This was really gratifying.”