MONTICELLO – It is said that great coaches teach their athletes to believe that they could perform better than they realize and to overcome whatever barriers they encounter. Oftentimes, those … 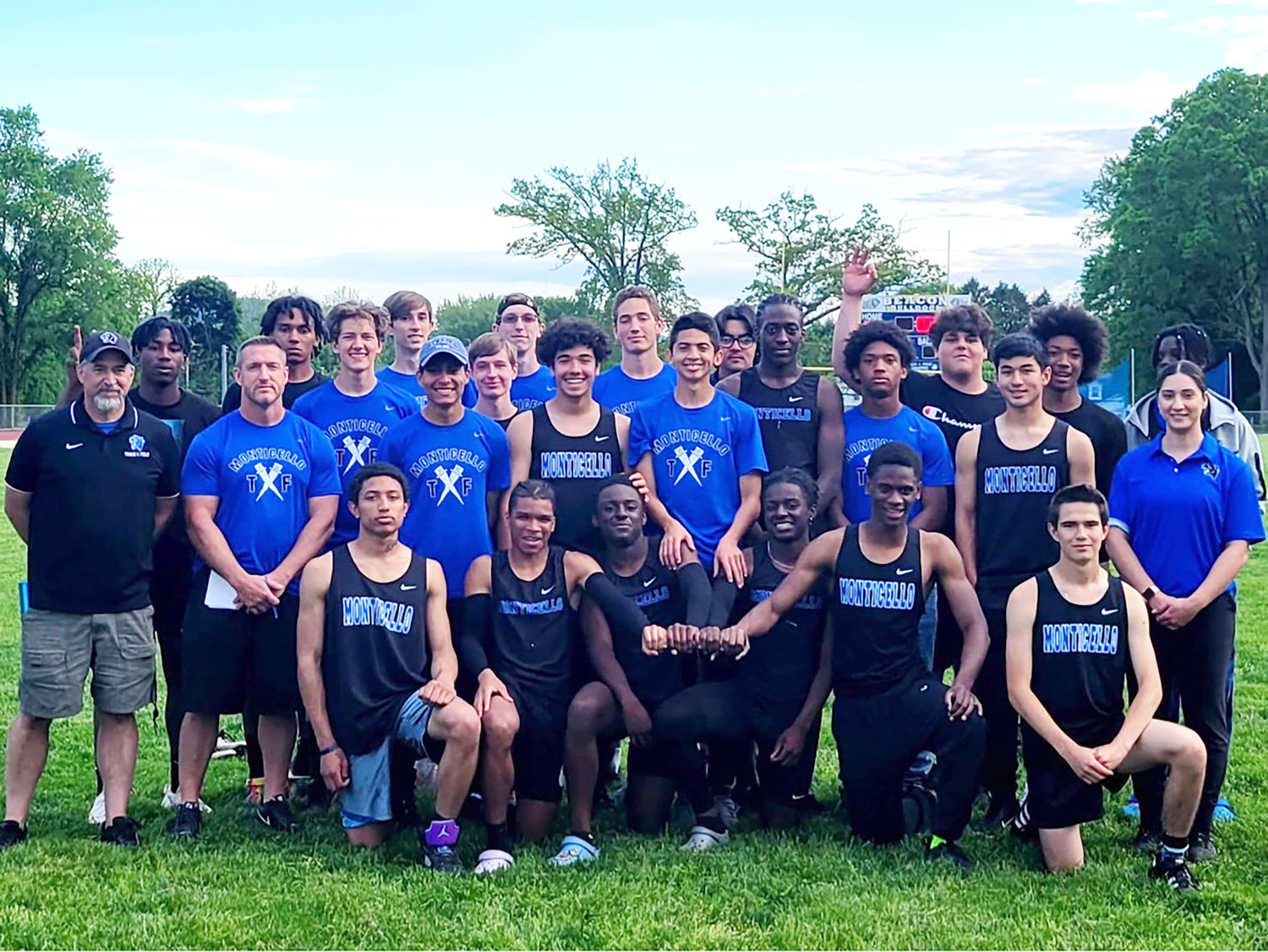 Coach Matt Buddenhagen and his assistants pose for a picture with the team after clinching their third consecutive Division III title with a win over Beacon. It was the tenth crown in the past ten years.
Richard A. Ross | Democrat 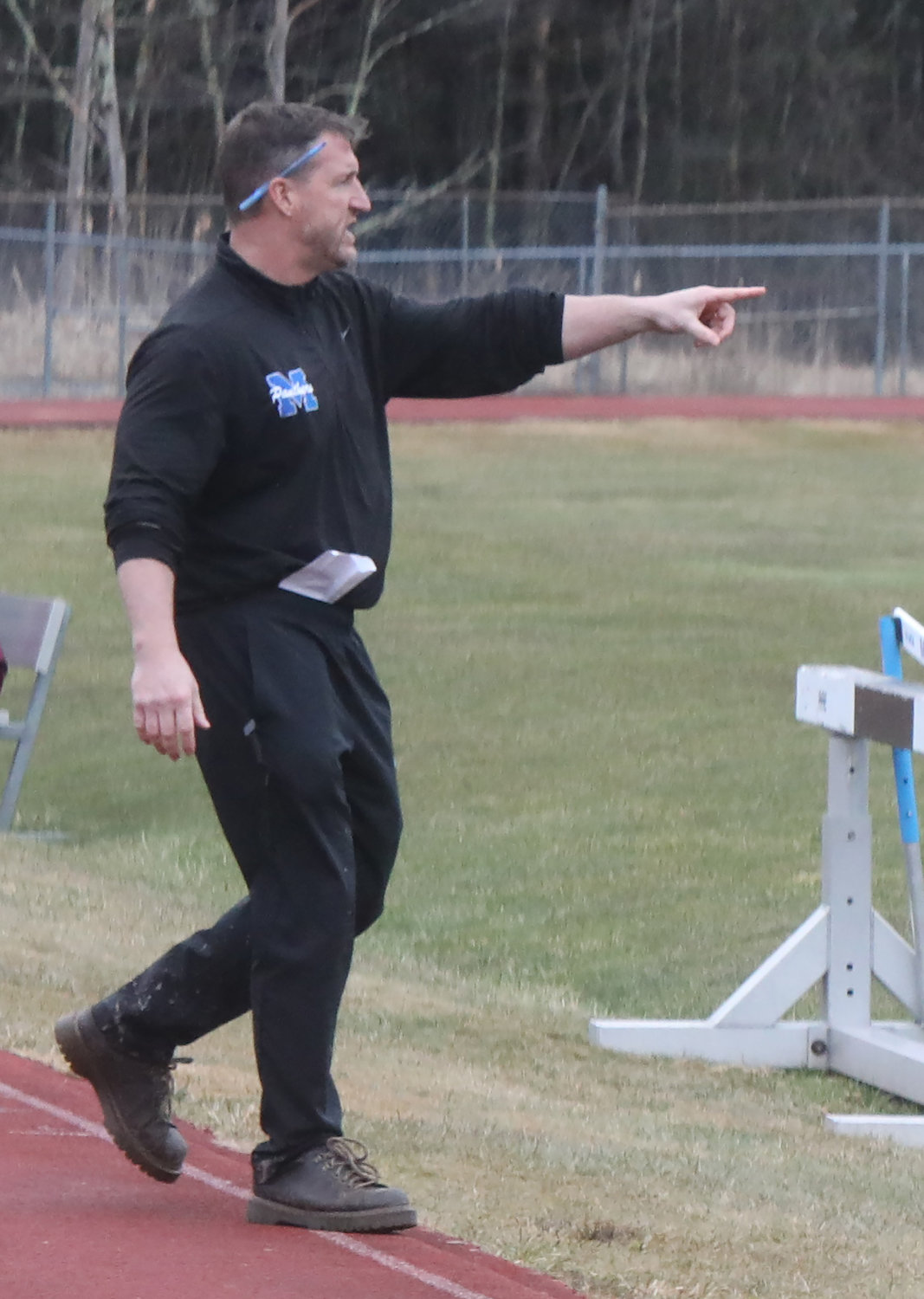 Monticello head track and field coach Matt Buddenhagen directing one of the Panther competitors at an early season home meet. Buddenhagen oversees all aspects of the meet, but he is blessed to have very capable assistants in Joe Seidl, Brian McAveney and Rick Sternkopf. “You need to surround yourself with good people, good coaches and good teachers,” he asserts. Often animated, he clearly shows his emotion and involvement at every turn.
Richard A. Ross | Democrat
Previous Next
Posted Friday, July 1, 2022 6:20 am
Richard A. Ross

MONTICELLO – It is said that great coaches teach their athletes to believe that they could perform better than they realize and to overcome whatever barriers they encounter. Oftentimes, those barriers are mental, stemming from a lack of belief in themselves. Monticello track and field coach Matt Buddenhagen understands these precepts, first and foremost from his own illustrious sports career.

Tough, determined and confident, Buddenhagen who hails from a sports family is a proven winner. What made him so successful as a football player at Delaware Valley, and then at nationally ranked Ithaca College, is not only his gifted physical ability, which was honed by rigorous hard work, but also an unshakeable mindset that being successful demands.

Buddenhagen sets high standards for his athletes, but none higher than he himself has lived and played by. He doesn’t shy away from calling out a team member if he thinks he isn’t living up to his potential. That demanding nature is balanced by a great sense of caring for the young men he mentors.

The results speak for themselves. This spring, Monticello won its third consecutive Division III title, its tenth in the past 12 years under his watch. The Panthers placed third in the OCIAA Championships ahead of all but Cornwall and Monroe-Woodbury. It was the Panthers best OCIAA finish.

Reflecting back, Buddenhagen doesn’t remember a time not playing sports. Starting out in youth soccer, because there was no youth football at the time in the late 80’s, he also played Little League baseball. In seventh and eighth grade at DVCS he played modified football as a running back and defensive back. Playing in what is referred to iron man football, he hardly ever came off the field. In his freshman year, he played both junior varsity and varsity. He was a standout ball carrier for the Eagles. They won Section IX titles in all four years of his high school career. They lost a state semifinal to Rensselaer in his senior year.

He ran track in high school, as many football players do. The two sports reinforce one another. He was recruited by Ithaca College as a running back but moved to slot receiver as well as punt and kickoff returner. He was named a first team All-American and led the nation in return yards. His roommate was Ithaca quarterback Michael Donovan. At one point the duo held 12 Ithaca records.

“It was the best four years of my life,” he recalls.

He started his teaching and coaching career at Warwick working under national Hall of Fame coach Tim St. Lawrence. Buddenhagen was coaching varsity football, but St. Lawrence needed a sprint coach. He was there for six years. He moved on to coach varsity football at Cornwall and led the team to its first state championship game. After a year of coaching at Sullivan West, Buddenhagen moved on to coach football and track at Monticello. In recent years he has coached both indoor and outdoor track and established a winning culture.

Character, accountability, team responsibility, good sportsmanship and hard work have been integral parts of that paradigm. Buddenhagen emphasizes that the honor of being chosen as the Sullivan County Democrat Outstanding Male Coach of the Spring should be a shared one. With talented and dedicated help from Coaches Joe Seidl (distance runners), Brian McAveney (jumpers) and Rick Sternkopf (X-C as well as girls track and field), Buddenhagen feels blessed.

“You need to surround yourself with good people, good teachers and good coaches. We work together, respect each other, meet and discuss workouts and practices. Coaching involves strategizing. You have to approach track meets with a plan to maximize points. I love the planning for a meet lineup.”

Every point matters, and sometimes it’s a place other than first that provides the winning edge. This year, Monticello was loaded with talented, experienced seniors. They had great chemistry and were so supportive of one another. Many school records fell by the wayside this spring.

At the outset of the season Buddenhagen wasted no time delivering the message to his team. “You have to want to win. It takes a burning desire. That said, in the long run, we’re teaching these boys to be fine young men.”

No doubt that the attributes of character imbued in the Panthers will serve many of them going forward in whatever path they choose. That ethic can and will pay off in the work force and fatherhood. The goal is to help these young men become good people.

Asked what he loves about coaching track, Buddenhagen avers, “Seeing a kid reach his best. I’m so happy when I see the look on a young man’s face when he beats his personal record (PR). What you put out; you get out.”

When it comes to coaching, Buddenhagen is all in. Sports have always been such a priceless part of his life, and he shares that enthusiasm and drive. Consider the run that the Panthers have had and consider how many young men have graduated while others stepped up to fill the ranks. The program has brought a great sense of pride to the school and community with its consistency and its accomplishments. No matter how much talent a team has, without dynamic, thoughtful and committed leadership, success is never guaranteed. Matt Buddenhagen has provided that inspiring leadership year after year.