On July 30, 1915, Charles E. Becker was executed in the electric chair at Sing Sing prison, the first police officer ever executed for murder in this country. 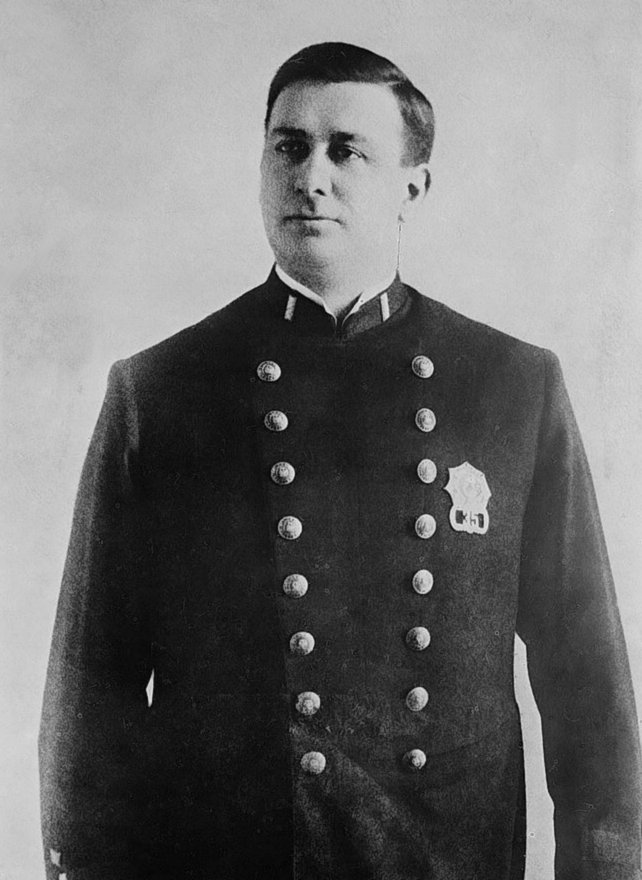 On July 30, 1915, Charles E. Becker was executed in the electric chair at Sing Sing prison, the first police officer ever executed for murder in this country.

Becker was born on July 26, 1870 in Callicoon Center, and lived and worked on the family farm there until he was 21. He later became known as the most corrupt cop in New York City history, was tried and convicted twice of a high profile murder he quite likely did not commit, and eventually died in the electric chair, but not without incident.

He was the youngest child of German immigrants Conrad and Mary Becker. After his time on the family farm, he moved to New York City in the fall of 1890 and worked at a variety of jobs before joining his brother John on the police force in 1893. Up until then, he apparently lived an exemplary life.

“The early years of Becker’s, those which were spent on the little farm and in the little school house at Callicoon Center, were barren of exciting incidents, but his moral honesty, uprightness and general character were extraordinary, as were those of his five brothers and his parents,” the New York Herald reported following his death. “The latter bore the reputation of being of a very religious turn of mind, and the neighbors who owned the farms adjoining the Beckers are voluble in their expressions of the excellent neighbors which the Becker family were, especially Charles.

Phillip Hust, a neighbor of the Beckers, whose farm joined the latter’s, spoke very highly of the character and habits of Charles Becker. He said: “Becker’s people were the very best of neighbors and Charley Becker was an honest and very bright boy. I never knew him to do anything wrong or to get into trouble of any kind.”

But getting into trouble is what Becker did best as a New York City cop. He had a well-publicized run-in with Stephen Crane while shaking down a prostitute in October of 1896, and became generally known for his brutality and corruptibility. His spotty record and penchant for graft made him a perfect patsy when gangsters had hoodlum Herman Rosenthal gunned down on West 43rd Street in July, 1912, and his subsequent arrest and trial enthralled the public throughout the world, becoming the biggest story in the country.

District Attorney Charles Whitman, who would later become New York governor, largely on the strength of his role in the Becker investigation, turned the case into a beachhead in the reformer’s war against the corrupt political machine that ran New York City at the time.

The gangland hit on Rosenthal, who owned and operated with apparent impunity a gambling house in New York City’s Tenderloin district, created a virtual media frenzy. It was the first killing in America in which the culprits escaped in a motorcar, and it silenced a known gangster who had been threatening to go public with his stories of police corruption. It was also, quite possibly, the first police investigation in this country in which newspaper publicity influenced the outcome. In the battle between the reform-minded mugwumps, who had elected Whitman to clean up the city, and powerful Tammany Hall, Charles E. Becker became a convenient scapegoat.

Before the dust had settled, Tammany Hall, the Jewish immigrants of New York City’s lower east side, and American society itself, would all be dragged through the mud. Fueled by the sensationalist reporting of the city’s dueling tabloids, the Becker-Rosenthal affair was on everyone’s mind, and the trial of the century that resulted was front page news everywhere.

Many, most notably Becker’s third wife, Helen, believed Becker had been framed, but he was, nonetheless, convicted in two separate trials and sentenced to die in the electric chair. A last minute appeal to the governor for clemency was denied, in an ironic twist of fate, Whitman, the D.A. who had prosecuted Becker in the first place, was then the governor—and the execution went forward. But even that was the stuff of pulp fiction. In a strange, gruesome twist that many of those present regarded as an eerie indication of Becker’s innocence, it took three attempts to actually kill him.

An estimated 5,000 people viewed Becker’s coffin before his funeral. As Andy Logan wrote in her fine 1970 investigation of the case, “Against the Evidence,” “some of the visitors came out of friendship, some out of curiosity, and most of them to get a look at the silver plate, eleven and a half inches long, that was now attached to the end of the coffin. It read: “Charles Becker/Murdered July 30, 1915/By Governor Whitman.”

Logan’s absorbing book puts forth a strong case that Becker, while brutal and corrupt, was framed in Rosenthal’s murder. A second author, Mike Dash, who wrote the 2006 book about the Becker-Rosenthal affair, “Satan’s Circus” makes a similarly strong case for Becker’s innocence. Like Logan, Dash does not dispute that Becker had broken plenty of laws over the years, but he leaves the reader with no uncertain feeling that if Becker had really wanted to have Rosenthal killed, he was smart enough to have planned a much better crime and to have gotten away with it.