According to the best available research up to this point, there has never been a major league baseball player born in Sullivan County. There have been a few locals who have played in the minor … 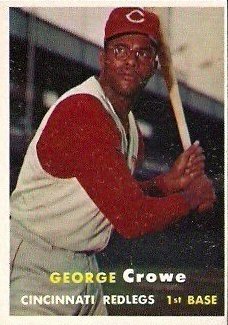 Most notable among the latter group was possibly Joe Gerhardt, a second baseman for the New York Giants and ten other teams in the earliest days of major league baseball in the 1870s and 1880s. Gerhardt was known as “Move ‘Em Up Joe” and even, on occasion, as “the King of Baseball.” Gerhardt lived in Liberty for many years, and played for and managed some of the most successful town teams in the county's history.

Former major leaguer, George Crowe, one of the first African Americans to play in the Majors, also lived in Sullivan County for a time, following his career with the Braves, Reds and Cardinals.

Crowe was a first baseman who batted and threw left-handed. He played major league ball from 1952 to 1961, and was chosen to the National League All-Star team in 1958, which was not the year Cincinnati Reds fans stuffed the ballot boxes to get their entire line-up on the squad. He did not appear in the All-Star game, played that year in Baltimore.

He also played two-thirds of an inning in 1958 as a left-handed second baseman, a rarity in the major leagues, and did so using his first-baseman's mitt. This prompted a protest from the Reds opponents that day, the Chicago Cubs, and eventually led to a rule change that mandated that all fielders except the first baseman and catcher must wear regulation fielder's gloves and not mitts.

In 1957, Crowe hit 31 home runs, and although that ranked him just sixth in the National League that season, that was back when 31 home runs really meant something. He also drove in 92 runs and batted .271. He batted .270 for his career, and his 14 pinch hit home runs were a major league record when he retired.

But George Crowe's accomplishments on the baseball diamond were just part of his legacy. For example, he was the first player ever honored with Indiana's “Mr. Basketball” title, given to the outstanding high school player each year since 1939. He played basketball professionally with a number of teams, including the renowned “Renaissance Big Five.”

Jackie Robinson called Crowe “the most articulate and far sighted” of the early African Americans in the major leagues, noting that young black players often sought him out for advice. It was as much for his wisdom and paternal presence as for his size that he was given the nickname “Big Daddy.”

In the early 1970s, George Crowe moved to a small house near Long Eddy, in one of the most remote areas of Sullivan County, and he was often seen in and around the hamlet. In a paper he wrote for the Society for American Baseball Research, Warren Corbett noted:

“As he reached his fiftieth birthday in 1971, Crowe dropped out. He moved to the back side of beyond, to the foothills of New York's Catskill Mountains. His home, near the hamlet of Long Eddy, was a log cabin he called “The Jackass Inn,” seven miles from the nearest paved road. It had no heat, electricity, running water, or telephone. The only way to his front door was a long hike up a rocky slope. Some described him as a hermit, but he stayed in touch with family and friends and was willing to talk to any reporter who took the trouble to find him.”

John Conway is the Sullivan County Historian. Email his at jconway52@hotmail.com.