MONTICELLO - If you've tried to make an appointment at the DMV lately you know that the schedule is at least a few weeks out. 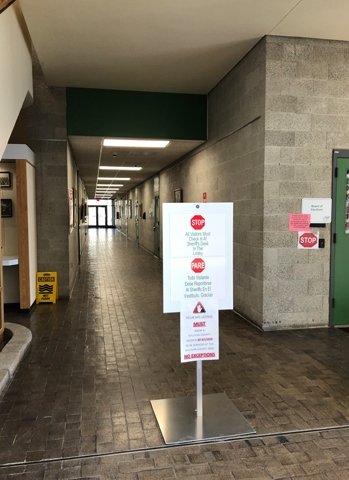 Sullivan County's DMV is by appointment only after being closed for months during the pandemic, with wait times a few weeks out.
ISABEL BRAVERMAN | DEMOCRAT
Posted Monday, December 7, 2020 12:00 am
Isabel Braverman - Staff Writer

MONTICELLO - If you've tried to make an appointment at the DMV lately you know that the schedule is at least a few weeks out.

County Clerk Russell Reeves said on Thursday that the wait time for licenses and registrations is four weeks and for a permit is three months.

This is not unique to Sullivan County; DMVs across the country are struggling with jam-packed schedules after having to be closed for months due to the COVID-19 pandemic.

Reeves said at a DMV in New Jersey people were camping out overnight to try and get an appointment the next morning.

“That does not include the phone calls and all the other things that go on in there continuously,” he said.

He said they are taking steps to alleviate the wait times, such as adding more permit testing machines and staying open until 8 p.m. two nights a week.

They are also addressing “emergency” situations, such as elderly residents who need a photo ID to pick up prescriptions from the pharmacy.

“It's a serious problem and we're doing everything we can,” Reeves said.

Dickens on the Delaware’s Gingerbread House Contest set for Dec.10 in Callicoon