Dairy farms get pink slips; try to figure the future

SULLIVAN COUNTY - Dairy farming has been in Rianne Erlwein-Owens' blood since she was a baby.

As a child, she helped clean newborn calves and bottle-fed them. Before long, she graduated to driving …

Dairy farms get pink slips; try to figure the future 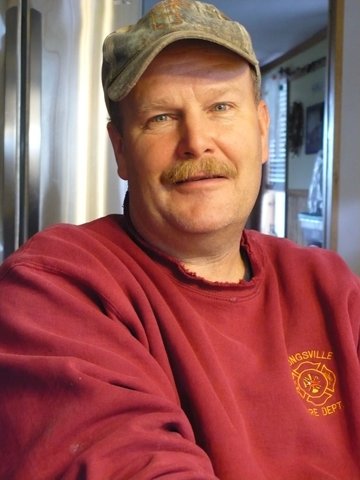 Farmer and Town of Callicoon Supervisor Tom Bose says family farms don't seek pity or sympathy but people who understand the importance of dairy farming and its challenges.
CONTRIBUTED PHOTO 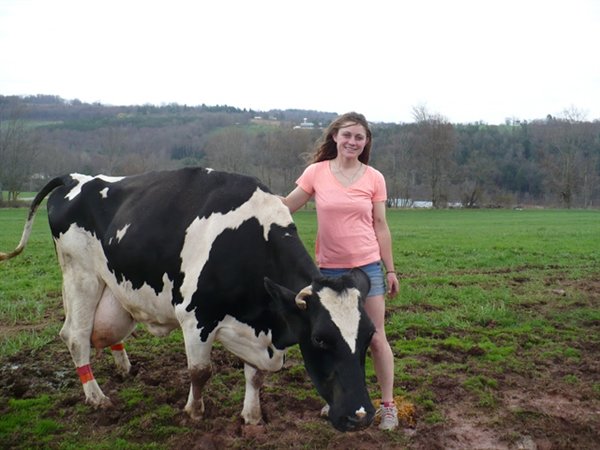 Rianne Erlwein-Owens, 24, has an RN degree but knows in her heart she wants nothing more than to work the family farm, Earl Myers Century Farm in Jeffersonville.
CONTRIBUTED PHOTO
Previous Next
Posted Thursday, May 24, 2018 12:00 am
Kathy Daley - Reporter/Photographer

SULLIVAN COUNTY - Dairy farming has been in Rianne Erlwein-Owens' blood since she was a baby.

As a child, she helped clean newborn calves and bottle-fed them. Before long, she graduated to driving the tractor.

Rianne (pronounced Ryan) was younger than 10 years old when, one day, she ran up to her father.

“I just delivered a calf,” she told Peter Erlwein. “Everything is okay. The mother's okay. Everybody's okay.”

“I knew I had a farmer on my hands,” said Peter.

A seventh generation dairy farmer at Earl Myers Century Farm in Jeffersonville, Rianne, age 24, doesn't mind the rigorous 15-hour days. She loves the look of a newly-hayed field she's just mowed and baled, or a cow that's on its feet after a bad fall or trouble giving birth.

“Farming is not a job,” said Rianne, who grew up with two brothers. “It's a lifestyle.”

But Rianne's future is uncertain. On Saturday, May 19, a certified letter from the milk processing plant that buys their milk arrived at the doorstep of six local farms.

The letter announced that as of June 30, Marcus Dairy Inc. in Danbury Conn. would no longer buy milk from the farms. In effect, it leaves the farms without their main source of income - their monthly milk check.

“Marcus said they have too much milk and can't market it for us,” said Dawn Erlwein, Rianne's mother.

Now is the time to plant corn to feed the cows, said Evelyn and Jim Weissmann, and they don't know whether to sow or not. They are heartbroken at the prospect of losing their herd of 65 milkers.

“If the cows won't be here, we'll probably sell the farm,” said Evelyn, tearing up. “Dairy farmers know their animals.

“They're with them when they're born, as they grow, as they become milkers. They have names, Crystal and Brook and Leila. We know by looking at them in the barn, for example, that Susie is not feeling well. We knew their mothers, grandmothers, great-grandmothers. They are our family.”

That kind of upclose and tender care creates good milk, the Weissmanns say, milk that is frustratingly not wanted on the market.

“There are eight to nine million people close by in New York City, and we can't get our fresh, healthy milk to them,” said Evelyn.

Alice Dirie, of Dirie Homestead Farm, said her family might have no option but to sell their cows.

“If we can't find another place for our milk to go, we'd have no choice but to sell,” she said. “If there's a solution, it has to be quick. For most of us, we don't have savings, we have no reserve, and we have to feed our cows (which is costly).”

Tanya Hahn, Jeff Bank executive vice president and farming advocate, said that the bank will continue to support the farmers.

“We'll do what we can,” said Hahn. “I grew up on a dairy farm, and this situation is heart-wrenching. People in this country should be ashamed of themselves - we take our food for granted.”

“What's happening,” says Evelyn Weissmann, “is not mismanagement on the part of farms - this is not something we caused.”

The spread of ‘Factory Farms'

Steve Gieger of Jeffersonville pointed to the giant dairy farms that have spread out over northern New York State, many of them “investor” farms rather than family-run. Dozens of workers can tend 5,000 cows or more in these 24-hour operations.

“Twenty-five to 30 years ago, they didn't have the influence they have today,” said the Jeffersonville farmer. “Now they are able to hold the price of milk down by flooding the market.”

“Large farms have an economic advantage,” Gieger added. “They can buy feed or soap by the truckload. And their fixed overhead costs are spread out over thousands of cows instead of 50.”

Mega-farms, too, are better able to weather changes in milk prices as compared to smaller farms, which have less income or savings to do so.

Creating a tidal wave of milk with nowhere to go was the March announcement by Walmart that it would milk, process and bottle at two 10,000-cow farms in Indiana.

Pennsylvania farmers who sold to the retail giant were particularly hard hit.

But the announcement chilled farmer' hearts everywhere. There would be a flood of milk alongside a waning consumer demand for milk in favor of lactose free or dairy-free beverages like soy and almond “milk.”

“We are losing our heritage and our history,” said Tom Bose of Youngsville, a farmer who is also the Town of Callicoon Supervisor. “It's not that the next generation of kids doesn't want to farm. Some of them want to but they can't, they can't stay alive financially.”

The difficult reality is that dairy farmers are paid less for their milk than it costs them to produce. Right now, they receive monthly milk checks similar to or worse than those they received 40 years ago, during the 1970s.

It is not unusual for small dairy farms - those with 50 to 150 cows - to lose thousands of dollars every year. Skyrocketing costs include feed and grain, supplies, electricity and equipment that ranges from tractors to pitchforks. Often, there are bank loan payments to be made for repairs or construction, or for operating costs.

As for Bose, he gave up his dairy herd in 2009, when milk prices hit a record low and he lost $50,000. He now works as a cattle dealer, buying and selling, and raising cattle for calves and then breeding them to sell to other farms.

“I get calls every day from farmers wanting to sell their cows. They don't see the light at the end of the tunnel,” said Bose. “I tell them ‘be patient, hold on, the milk (supply) is inflated and cattle prices have dropped.'

“I've had grown men cry when I'm moving their cattle,” Bose said. “They tell me, ‘my father, my grandfather farmed here. I feel like a failure.'

“You're not a failure,” Bose replies. “The system has failed you.”

One healthy option for consideration of this serious dilemma, said Steve Gieger, is the kind of quota system that provides Canadian farmers with a living wage.

“Each farm comes up with data on their last five years' average production of milk,” said Gieger. “You get paid a decent price for this base, say $20 per $100 pounds (or 11 gallons) of milk. Then, any excess milk you produce is paid a good price if the supply of milk is needed, or if the supply is not needed, the price is set very low.”

“I'm not a big fan of quotas,” said Bose. “But the quota system needs to be considered.”

Bose also pointed to a pool of money already in the U.S. Treasury that could be earmarked for farmers.

A three-year-old federal insurance, the Margin Protection Plan (MPP), encouraged farmers to buy insurance to assist them when the difference between the milk price and the average feed cost fell below a certain dollar amount.

The problem was that the milk price hasn't plummeted far enough to allow the insurance to kick in. According to Bose, one Sullivan County farmer paid $11,000 in MPP “premiums” and got back $2,000.

“That $100 million was put into the Treasury and it should go to the farmers who put it there,” said Bose. “We need emergency legislative action (to that effect) on the part of our state and government officials.”

In addition, said Bose, “We need people who care to help us. A grassroots group can do a lot. Farmers don't have time to go to Albany or Washington, and we aren't looking for pity or sympathy. We just want to alert our public as to why dairy farmers can't make it.”

No matter where or when the blow hits, the loss of dairy farms has serious ripple effects. Hit hard are farm-related businesses like Tractor Supply, Agway, John Deere, service stations that fix tractors, veterinarians who work with farm animals.

Estimates are that every dollar spent by a farmer has an impact of seven times that much to the local economy.

“And it's not just the bottom line,” said farmer Alice Diehl. “Farming is an honorable culture. We are in the business of feeding the nation.”

Dawn Erlwein of Earl Myers farm, argues that without dairy farms, “there are no green fields, no pastures - because it takes cows to feed on grass to keep things green and open. Without cows, you have no rural character. You have brush.”

Daughter Rianne Erlwein-Owens adds that with the small dairy farmer gone, milk customers will be dependent on the gigantic farms “that will have complete control over the price of milk (on supermarket shelves). And these places are owned by rich people, corporations and other countries.”

“If you value your family farms,” said Dawn Erlwein, “you'll take care of them.”

Colleen Monaghan, Executive Director of Cornell Cooperative Extension Sullivan County, said, “While the industry has shrunk over the last two decades, Sullivan County's dairyman and families are integral to agriculture in the County.

“Dairies directly contribute more than $7 million to the local economy, with another $5 million in indirect contributions to businesses that support jobs and agriculture, like Cochecton Mills, Narrowsburg Feed, hardware, equipment and fuel suppliers, and countless others.

“Loss of any more dairies in the county will have a ripple effect throughout the economy, with the potential loss of millions of dollars of revenues,” she said.

“CCE Sullivan is committed to supporting local dairy families and we're hoping that crisis might open a door to opportunity.

“We are working with our local dairies, the Sullivan County Legislature and Division of Planning, and the IDA to assess resources in the short term, and to brainstorm alternative market options for the long term viability of Sullivan's dairy industry,” Monaghan said. “There are niche market and value-added product demands that can provide an opportunity to reform Sullivan County dairy and we're hopeful that together we can find solutions to support the industry for future generations.”