SULLIVAN COUNTY — Weeks of negotiations, discussions and debate came to a close on Thursday when legislators unanimously passed a resolution that addresses assistant district attorney (ADA) … 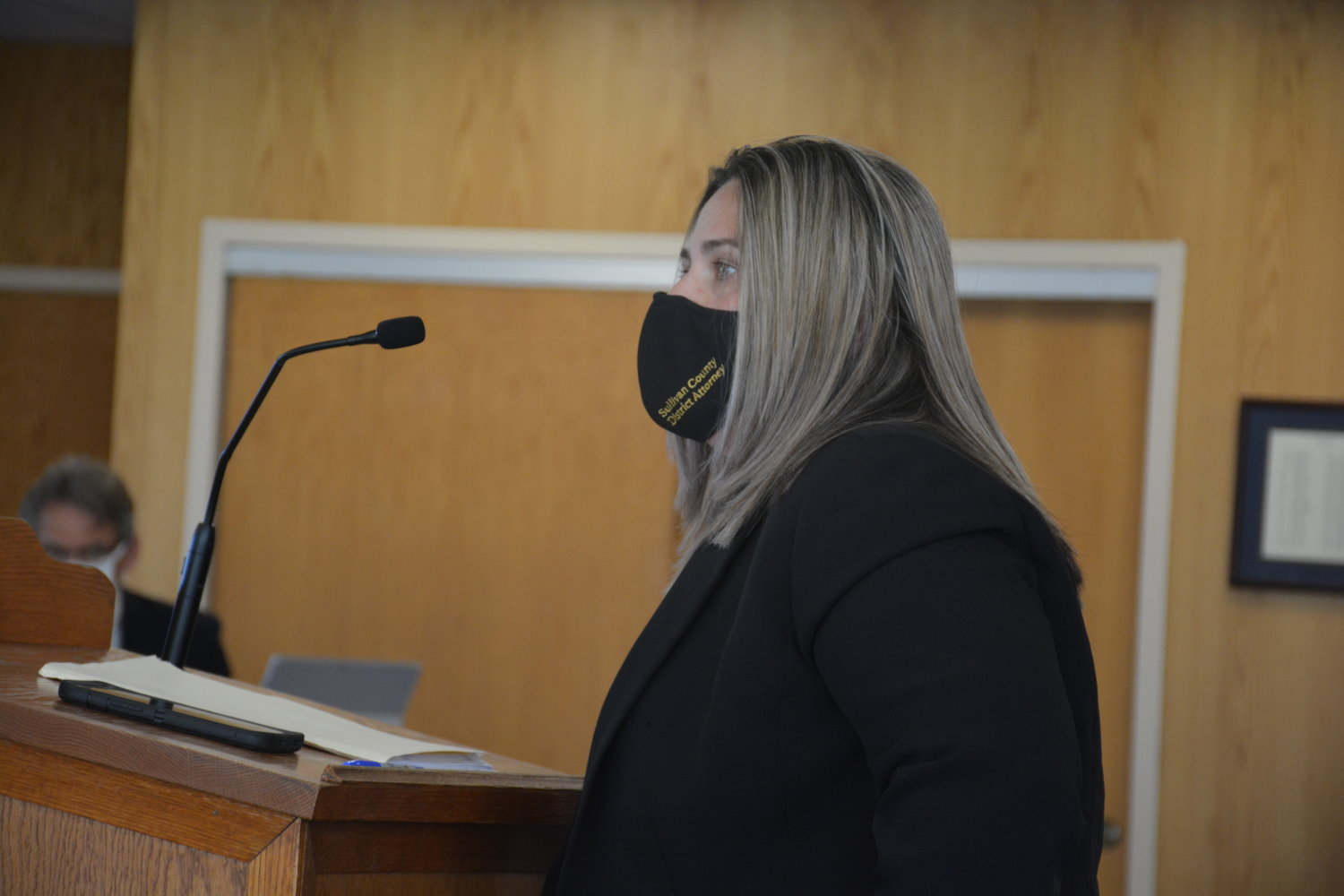 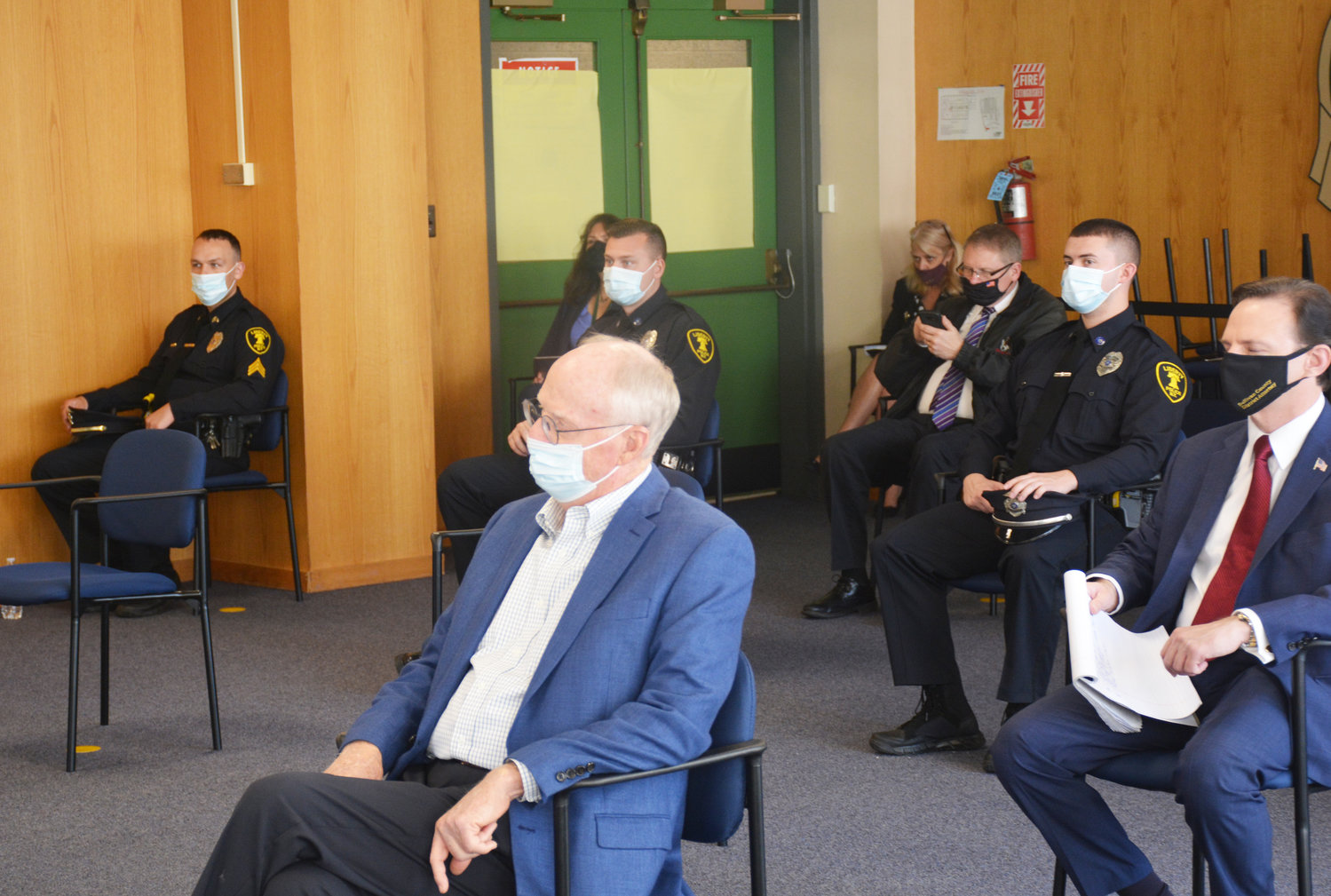 Several members of the past and present local law enforcement community showed up in support of District Attorney Meagan Galligan at Thursday’s full board meeting of the County Legislature.
Joseph Abraham | Democrat
Previous Next
Posted Tuesday, October 26, 2021 6:30 am
By Joseph Abraham

There was a tense exchange between Galligan and Legislative Chair Rob Doherty when she approached the podium in case she was needed for discussion on the resolution.

The Chairman said discussion would only be amongst legislators at that point. However, after several legislators said they wanted to afford her the opportunity to speak, Galligan was able to address the resolution.

Galligan told legislators she was “outraged that the elected district attorney has been denied an opportunity to have input to this legislature on a resolution,” citing past examples when department heads have been allowed to do so.

Following additional discussion, the only change legislators made to the resolution was the removal of the words “cost of living” from a paragraph that now reads, “Resolved, that adjustments to anticipated steps and Senior Assistant District Attorney salaries will be fixed by yearly budget appropriation or other resolution of the Legislature…”

Galligan recently told legislators that she was not asking them to guarantee the implementation of cost of living adjustments, but did ask for a commitment from them to have a conversation in the future.

Majority Leader and Legislator Alan Sorensen suggested the amendment to the resolution because they [the legislature] have affirmed that commitment to the district attorney. Sorensen also personally reaffirmed it.

Aside from that change, as the Democrat previously reported, the resolution creates a two-tier system for the office’s eight ADAs, with Tier 2 being the less experienced ADAs, and Tier 1, being the ones with the most experience, handling the more serious crime cases.

The resolution raises the starting salary for an ADA (which is currently around $53,000) in Tier 2 to $63,500. They’d also receive a two percent raise annually, and after seven years, would be making $72,000 and change. All raises within the system are pending good review.

According to Doherty, “significantly larger” Orange County starts its ADAs at $65,000, while Cattaraugus County, “the most comparable in size, crime and budget to Sullivan County,” starts ADAs at $59,000.

The resolution also creates two stipends to be given at the discretion of the DA to an ADA for certain work, as well as two additional administrative assistant positions for the DA’s office effective January 1, 2022.

Final thoughts
Doherty said the new legislation gives the DA the ability to be competitive and attractive to new hires, while making the pay structure more flexible and properly adhering to the annual budget process, as taxpayers expect. He added that it does not take away from the DA’s “rightful ability to ask for more funding, including for higher raises, in the preparation of future County budgets.”

At the conclusion of Thursday’s legislative meetings, Doherty noted that while he appreciates the DA’s commitment to her people, she’s not the only person in charge of an office.

“I think there’s a lot of commissioners and directors in this county that work very hard,” said Doherty, “and they [also] take their work home and they work until seven, eight o’clock at night. I want to thank all of them as well. Her office is not the only office working hard in this county.”

Galligan told the Democrat on Thursday, “While I am extremely concerned that an attempt to preclude me from participating in open, public discussion was undertaken, I appreciate all of the Legislators who spoke up against that effort. I am pleased with the public and private support expressed to me by a majority of our Legislature.”

“From time to time, our County Manager recommends that non-union employees receive certain adjustments; the exclusion of positions in my Office from those incremental increases over the past several years or more is exactly what got us into this position,” said Galligan. “We can do better, and, beginning today, I am confident that most of our Legislators are committed to doing just that.”