This is the first of two articles on last week’s Sullivan County Drug Task Force meeting. Part II will focus on additional actions that have been taken by members/pillars of the task force to … 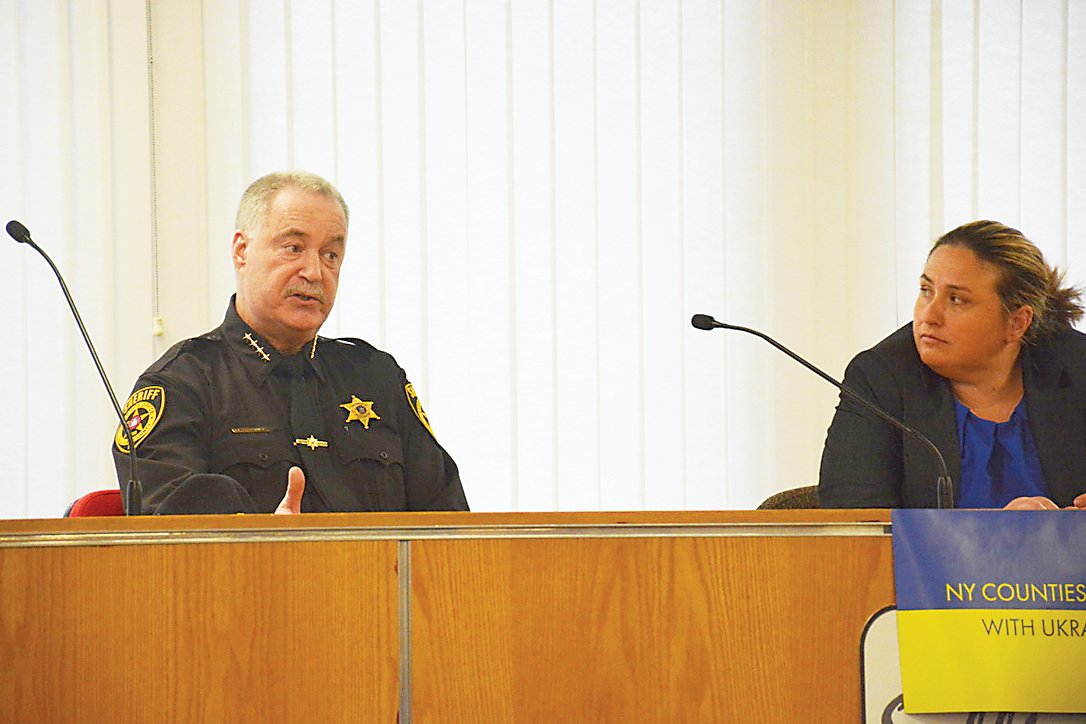 This is the first of two articles on last week’s Sullivan County Drug Task Force meeting. Part II will focus on additional actions that have been taken by members/pillars of the task force to address the opioid crisis, as well as possible plans for opioid settlement monies.

MONTICELLO –– “Like I said in the beginning, no one person could do this, no one group could do this. It’s our collective strength that makes this committee so strong,” said Deputy Commissioner of the Division of Health and Human Services Wendy Brown at the start of Friday’s Sullivan County Drug Task Force meeting.

Brown and District Attorney Meagan Galligan co-chair the task force, which has the difficult task of combating the ever present opioid crisis.

Friday’s gathering, held in the Legislative Hearing Room at the Government Center in Monticello, was their first biannual meeting of 2022.

The meeting’s agenda included updates on the task force’s pillar structure, what different pillars were working on, and an educational presentation on Harm Reduction/Drug Screening: Fentanyl Test Strips.

Fentanyl continues to be a problem, as Galligan explained that they’ve seen it rising in almost every other drug in the County in the past year.

“It used to be primarily a heroin-related issue. It’s not anymore,” said Galligan. “…If you believe that you’re buying a prescription pill on the street, it’s actually fentanyl. Fentanyl has become so cheap in this area, that it is marketed as every other type of drug. We’ve seen marijuana laced with fentanyl, every drug you can think of. So the law enforcement pillar really is putting tremendous effort on interceptions.”

Galligan noted that in the last several weeks, they’ve executed numerous search warrants throughout the County to try to disrupt this drug distribution, and put others who might engage in it on notice that they’re watching.

There’s also a critical link between fentanyl distribution and gun possession and violent crime, according to Galligan.

“Two of the search warrants we’ve executed over the last two weeks have turned up not only fentanyl, but also illegally possessed firearms,” she said.

Galligan said they recently finalized and submitted their 2022 application to the Federal Drug Control Policy Center for a New York/New Jersey High Intensity Drug Trafficking Area Designation. Galligan noted that they had applied for the “tremendously important” designation before and didn’t get it.

“All of the other counties in the Mid-Hudson region have that designation,” said Galligan. “What that means is you’re a member of the Hudson Valley Crime Analysis Center. The center has been very generous and allowed us to make use of many of its resources even without the designation, but what it does is open up a lot more avenues for funding and other trainings and resources that would be available to our County.”

Galligan also touched on mental health, calling it a driver, not only for crime in the County, but also substance use disorder, and the need for resources addressing mental health.

On that note, Assemblywoman Aileen Gunther, talked about her 9-8-8 bill that recently passed. Now in an emergency situation, if someone dials 9-8-8, first responders know when they arrive that there is a mental health issue.

She’s also working on another bill that would require the NYS Department of Health and NYS Office of Addiction Services and Supports (OASAS) to establish a pilot program with at least four infant recovery centers in areas of need in the State for babies born addicted to drugs.

And lastly, another bill is focused on individuals diagnosed with opioid use disorder or who are discharged from treatment facilities, prisons, hospitals, etc. to be provided with an overdose reversal drug.

Galligan wrapped up her report with an update on Hope Not Handcuffs, which has had success since being implemented in the County, with 22 intakes since October.

Sheriff Mike Schiff mentioned, as he has in the past, the issue of having limited places to take people with a mental health issue to get treatment once law enforcement gets them off the street.

He also talked about immigration at the border and its impact on the opioid crisis. Schiff stated that the vast majority of the people coming into the country are looking for a better life, but mixed in are gang members and people indebted to the drug cartels.

“We’re shipping people to the tune [of] about two million a year into this country and we don’t know who all of them are,” said Schiff. “You can’t keep pumping that volume of people into an area no matter how large, eventually you saturate the area. We have to be cognizant of the law enforcement keeping our family safe, cutting into the drug trafficking, getting it off the streets so that people can’t buy it. That’s going to be our role and we’re going to have to step it up dramatically.”

“The way that things are set up now, we don’t have the tools we used to have to get to the people peddling this poison to our families,” said Schiff, who also talked about the rise of Fentanyl on the streets. “... People think they’re getting oxycodone, they are not. Those aren’t overdoses, those are poisons ...

“This dynamic is slipping away from us on the law enforcement end,” continued Schiff. “If we don’t wake up and get a firm grip on this, all the stuff we’re doing on the back end is going to be meaningless, because our streets won’t be safe.” Sullivan County Jail According to

Administrator Hal Smith, pre-COVID, drug and alcohol counseling in the jail were separate entities that didn’t necessarily communicate with each other.

He said in August they contracted out the medical and mental health services at the jail, and are now trying to have the same company provide the drug and alcohol counseling.

“As you all know, the drug addiction, a lot of times, comes from a medical issue, or a mental health issue,” said Smith. “So having all three groups discussing the same client is vital, in my opinion.

“At a minimum, this group is going to come in, provide a 40-hour a week drug and alcohol counselor … additional RNs to distribute medication, and they’re going to provide additional hours [for] a medical doctor.”

Smith said their studies have found that 40 percent of all people incarcerated in the jail have to go through some type of drug withdrawal.

“That’s a pretty shocking number and I’ve been doing this for almost 38 years,” said Smith. “So we’ve got to change how we’re doing things.”