ELLENVILLE –– “The human spirit is stronger than anything that can happen to it,” averred George C. Scott.

Just such a spirit appeared majestically in the collective, … 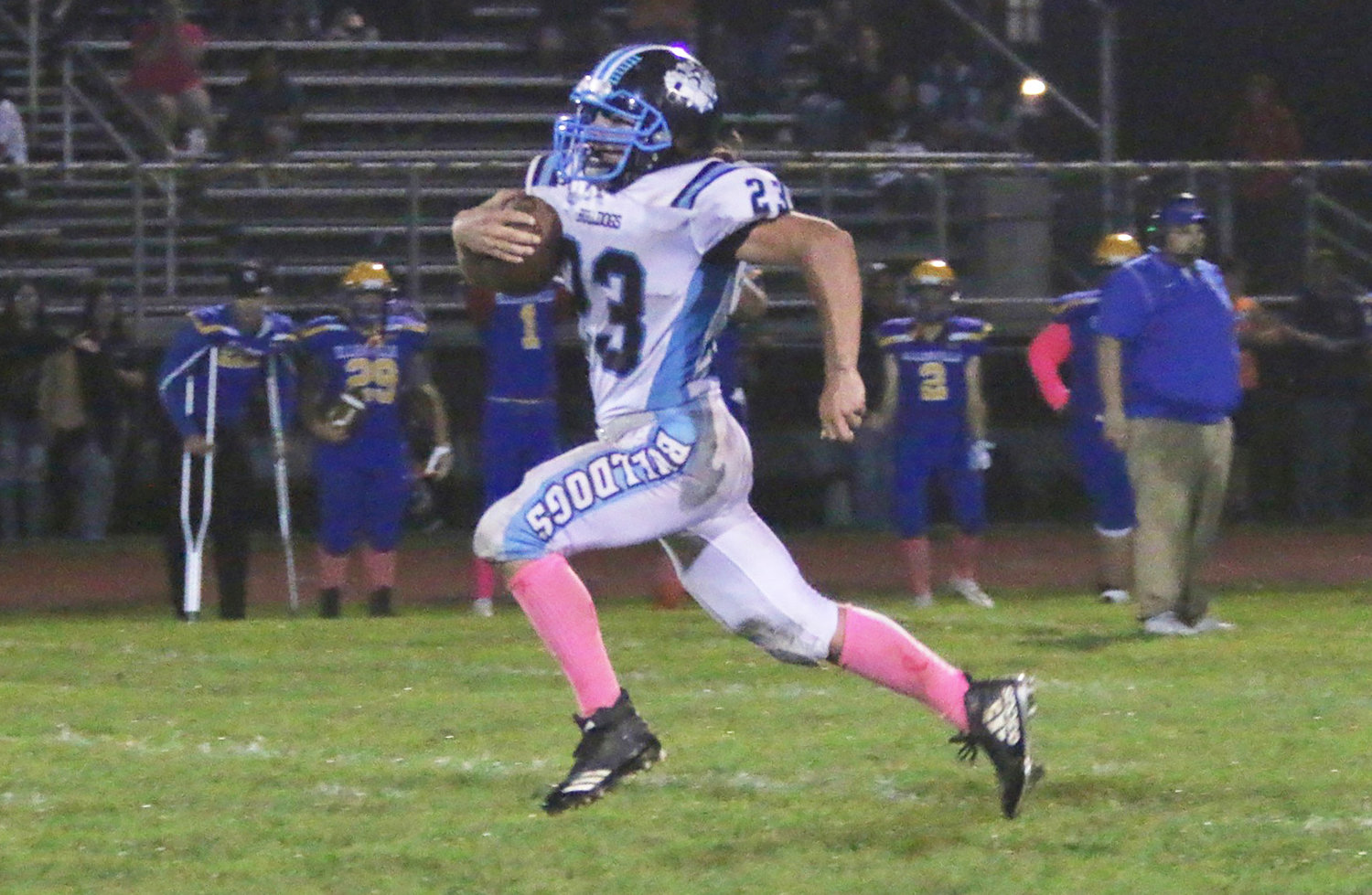 Sullivan West sophomore Rally Cruz rambles towards the endzone for a TD run that would tie the game at 28-all with 2:45 remaining. The failed conversion prevented the Dawgs from taking the lead. Ellenville scored on the first play from scrimmage on the next series and went on to win the game 36-28. The two teams are in the playoffs, and next week’s outcomes will set the seedings for the first round.
Richard A. Ross | Democrat 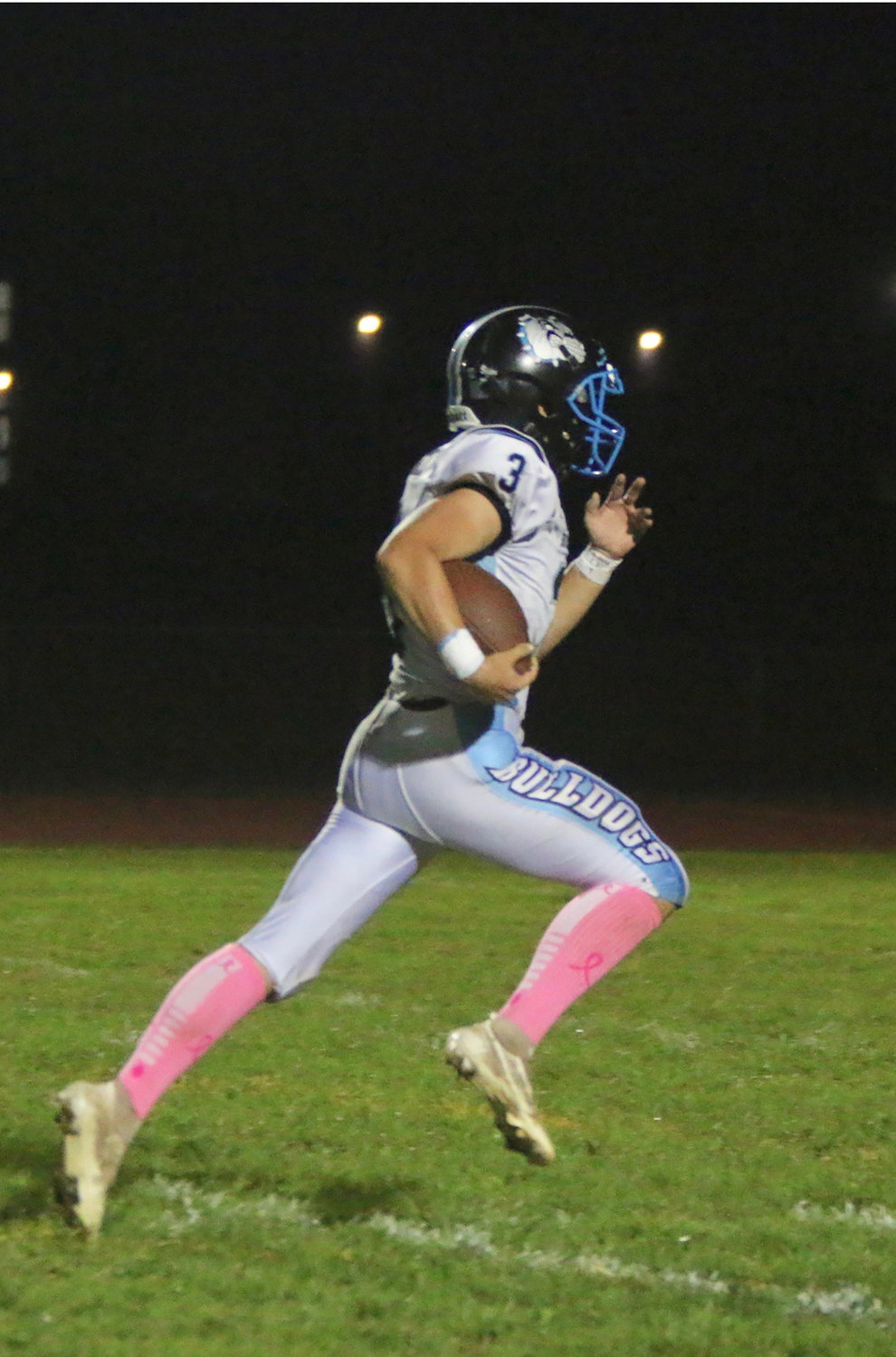 Sullivan West senior Justin Grund races for the Bulldogs’ first score of the game. They were down 28-0 at the half, and Grund’s run opened the door to a furious comeback that would eventually tie the game late in the fourth quarter.
Richard A. Ross | Democrat
Previous Next
Posted Tuesday, October 19, 2021 6:20 am
Game Stats

ELLENVILLE –– “The human spirit is stronger than anything that can happen to it,” averred George C. Scott.

Just such a spirit appeared majestically in the collective, inspiring effort of the Sullivan West Bulldogs as they rebounded from a 28-0 halftime deficit against Ellenville, roaring back to tie the game with unbridled energy and resiliency. In doing so, they showed their collective heart and indomitable will. With only 2:45 remaining in the game, sophomore running back Rally Cruz bolted free, much to the frenzied delight of the Dawgs’ onlooking fans, which by the way, included a bevy of Tri-Valley football players, capping off a furious resurgence that proved the team’s refusal to quit. Adversity is the crucible through which sweet success can be born, and as basketball immortal Kareem Abdul Jabbar noted, “You cannot win unless you learn how to lose.”

Though victory was not ultimately attained as Ellenville’s Casimiro Pomales scored his third TD in the waning minutes of the fray, the 36-28 final score did not obviate what had just taken place. In the aftermath, clearly disappointed, the Bulldog gridiron warriors could not readily absorb what they had just done and what it can signify going forward into the labyrinth of the playoffs. But the words of their coaches made it clear: what the team had just evinced was more valuable than the hoped for win. Indeed, as it turns out, a victory over Roscoe by more than eight points can still give the Westies the top spot in the Division.

Sports, which mirrors the grand theatre of life, often unveils its unforeseen dramatics. After winning the toss and electing to receive, the Bulldogs drew the first troubling card from the seemingly stacked deck with a block in the back penalty on Jacob Hubert’s fine return. That set them back dangerously close to their own endzone. A stalwart Blue Devils’ defense quickly prompted an errant punt which gave Ellenville the ball at the 15. Pomales carried it in from the eight only two-minutes into the game and EV drew first blood at 6-0. The conversion failed. A fine kickoff pinned the Westies again. Three and out ensued as the Blue Devils bottled up the Dawg’s typically powerful run game.

On the next series Ellenville’s senior QB David McCombs connected on a 14-yard screen pass to senior wideout Joshua McNeill. The blue and gold added a two-point conversion, and it was 14-0 with 5:37 to go in the first stanza. A 68-yard TD run by Hubert was called back by officials who would consistently put their heavy imprint on this game. It was 14-0 at the end of the quarter. Early in the second quarter Sullivan West got its first stop. A punt was blocked by Chris Campanelli, but once again, the Dawgs got no traction and EV took over on downs. Two plays later, Pomales rumbled 85 yards, and with a conversion, the lead burgeoned to 22-0 with 7:28 to go in the half. An onside kick was recovered by Ellenville as SW’s misfortune mounted. A 32-yard strike to McNeil just 14 seconds later made it 28-0 as the conversion failed.

SW did recover an EV fumble but couldn’t capitalize. Pomales had a 53-yard TD called back. Penalties abounded as more flags were flying than on the Fourth of July. The score remained 28-0 at the half. Ellenville received but Jakob Halloran recovered a fumble which then led to a lengthy TD run by Justin Grund. Gavin Hauschild ran in the conversion and the Bulldogs had life at 28-8 with 9:15 to go in the third. A sack by Tarrell Spencer led to an Ellenville punt. The ball went back and forth. Pomales had another TD called back and the quarter ended with the 28-8 score still intact. Yet another EV fumble was recovered by Spencer, and the ensuing SW drive, sustained by EV penalties, led to a Hauschild TD with 6:32 remaining in the game, to make it 28-14. The conversion failed. EV was showing signs of fatigue and the Dawgs got the ball back. A fine pass to Jaymes Buddenhagen led to a 46-yard TD ramble by Hauschild with 4:48 to make it 28-20.

EV incurred a penalty on the conversion and SW got it in on the next try to make it 28-22. The excitement on the sideline was building to a frenzy. Buddenhagen recovered a fumble and Cruz broke loose with 2:45 to cap off the unprecedented comeback. Sadly, a miscommunication on the conversion prevented the Westies from taking the lead. As it would turn out, the exaltation was short-lived as Pomales rumbled 80-yards for the tie-breaking score. EV added the conversion, but SW still had 1:42. The drive got as far as the EV 40 but a fourth down hail-Mary pass was intercepted and the game came to an end.

The Westies fell to 4-1 (3-1 league), while Ellenville improved to 3-2 (3-1 league). Roscoe remained unbeaten in league play (4-0) with its 26-0 win over Eldred. SW travels to Roscoe on October 23 for its final regular season fray with crucial playoff seeding ramifications on the line. Both SW coach Ron Bauer and Ellenville Coach Dan Cavanagh attested to the intense caliber of the game. Each was proud of his team’s accomplishments and looks forward to the playoffs in two weeks.