Full disclosure: John Denver is my favorite performer ever. So, it figures that I was predisposed to like “Almost Heaven: Songs of John Denver,” which premiered at Shadowland Stages in … 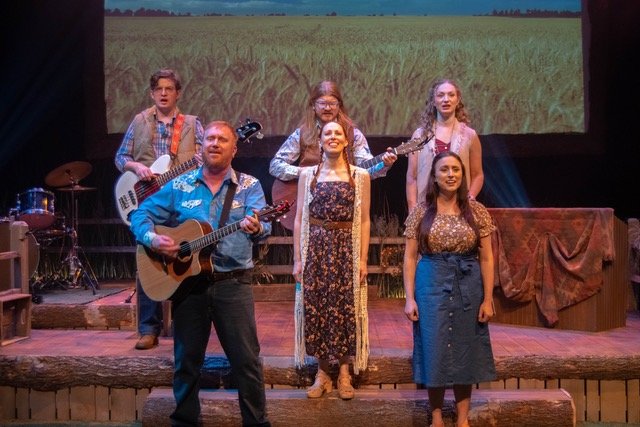 The cast of “Almost Heaven: Songs of John Denver” performs at Shadowland Stages in Ellenville through September 11.
Posted Friday, August 19, 2022 7:00 am
Carol Montana

Full disclosure: John Denver is my favorite performer ever. So, it figures that I was predisposed to like “Almost Heaven: Songs of John Denver,” which premiered at Shadowland Stages in Ellenville last weekend. No surprise here … not only did I like it – I loved it!
Heavenly harmonies, soaring solos, rollicking rock-a-billy all done to thunderous applause. I wasn’t the only one who loved it – the audience did, too.
Six talented performers perform 20-plus Denver songs, many of which he also wrote. Chris Blisset (who also directed the show), Carrie Brandon, Victoria Chaieb, Patrick Dinnsen, John Fitzpatrick and Amanda Ryan Paige take turns singing lead, accompanying themselves on guitar, fiddle, percussion and drums.
From the familiar “Thank God I’m a Country Boy,” which the audience was invited to sing along to, and “Rocky Mountain High,” to the slightly less familiar “All of My Memories” and “Yellowstone,” each song was interwoven with details about Denver’s life and career, providing smooth transitions in between the numbers.
In the background, slides and films showed song-appropriate images such as anti-war protests (“Weapons”), country roads (song of the same name), the Rockies (“Rocky Mountain High” and “I Guess He’d Rather Be in Colorado”), breaching dolphins (“Calyspo",) and beautiful vistas (“Looking for Space.”)
The scenic design by Peter Johnson was country appropriate, rustic and woodsy, and costumes by Christina English were fittingly country casual. Lighting design by Jeremy Johnson set the various moods perfectly and sound and projections by Jeff Knapp added wonderfully to the production.
While all the songs resonated with the audience in one way or another, two of them especially stood out for me. “Matthew,” sung by Chris Blisset is a song Denver wrote that talks about an uncle who had some hard times, causing him to lose everything in life, but who still found joy in “a windy Kansas wheat field” and a “Kansas summer sky.” Blisset performed this song from the depths of his heart in a poignant and tender rendition evoking a lump in the throat of this old softy.
The other standout was a song called “For You,” sung by Patrick Dinnsen. Denver wrote the song in 1986 for his second wife Cassandra Delaney. A simple, beautiful love song. Dinnsen “confessed” after the show that the first time he sang the song in rehearsal, he couldn’t get all the way through it. Having mastered his emotions, he passed the torch to the audience, many of whom had tears in their eyes during his performance. “Just to live in your laughter, just to sing in your heart … just to know that I’d give my life for you …” It doesn’t get more genuine than that.
“Almost Heaven” is a heartfelt tribute to one of the best-selling artists of all time. Blisset’s direction is, dare we say, just heavenly. And the performers personal feelings for Denver and his music are evident throughout the performance. The musical is a loving homage to an entertainer, environmentalist, philanthropist, actor and humanitarian who was taken from us much too soon, but who left us a lasting legacy, which this cast performs with authentic warmth and sincerity. Bravo, and thank you. John would have been proud to have you represent him.
“Almost Heaven” plays at Shadowland Stages through September 11 on Thursday, Friday and Saturday at 8 p.m. and Sunday at 2 p.m. Call 845-647-5511 for ticket information.

Ch-ch-ch-ch-changes, turn and face the strange