Greetings to all! On Friday, July 2nd, more than ten weeks ago, I first reported that there was a missing cow in the Kenoza Lake vicinity. A photo of the missing cow appeared in the Sullivan County … 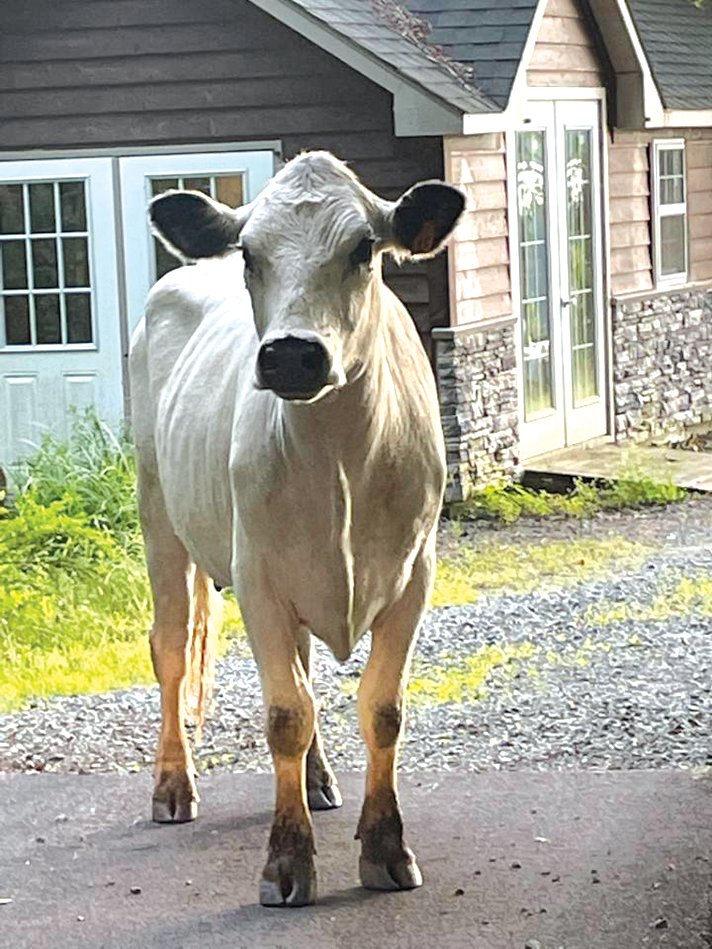 After being on the lam for more than ten weeks, after two attempts to capture Wild Child, she simply walked home.
Contributed Photo
Posted Friday, September 17, 2021 8:48 am
Susan Brown Otto

Greetings to all! On Friday, July 2nd, more than ten weeks ago, I first reported that there was a missing cow in the Kenoza Lake vicinity. A photo of the missing cow appeared in the Sullivan County Democrat and with that the story of the missing AND ERRANT cow, named Wild Child, began.

As I was preparing to write this column, I was pondering various headlines. Do I say that THE GRASS IS NOT ALWAYS GREENER ON THE OTHER SIDE OF THE FENCE? or do I say, UNTIL THE COWS COME HOME? Anyway, there are various headlines that one could use.

So, let me give you some background information. I grew up on BROWN FARMS, a former Holstein dairy farm, on Old Taylor Road, about two miles from downtown Kenoza Lake. Dave Slater and Slater Farms is located about one quarter of a mile from Brown Farms. Dave Slater has White Park Beef cows, basically, polled (no horns) white cows with solid black ears. Each spring, for the past 25 years, Dave has moved some of his cows from his farm, up the road, to Brown Farms. Sometimes it is the mothers and their calves. Sometimes, virgin heifers and a bull. Bottom line, the cows spend the months of May through October pasturing on Brown Farms. The cows are not milking cows.

So just like farmers living in the Alps in Switzerland, who move their cows to summer pastures, Dave Slater moves some of his cows to summer pastures. On the weekend of June 26th and 27th, Dave and my nephew Gordon Davis of Philadelphia, moved six cows from Slater Farms to Brown Farms. Shortly thereafter, Wild Child bolted the Brown Farms pasture and thus started, the ten week “on the lam” story.

Dave first called me on July 1st and asked me to include the missing cow story in my Kenoza Lake news column. There was a photo taken on a security camera in Kenoza Lake Estates. That was the photo in the Sullivan County Democrat on July 2nd. After visiting Kenoza Lake Estates, the cow then walked to Moeller Road, to the Ackermann farm around the 4th of July. Next move the Cirino and Barbara Bruno property, which is located between Burr Road and Moeller Road. Barbara Bruno saw the cow a few times. Then the cow migrated to Krantz’s pond on Burr Road. Next, the cow traveled over to Gabriel Road and Jared Kubernik’s house. The cow settled down there for a few weeks. An attempt was made to capture the cow, but she bolted. Next, she settled in on Burr Road. Dave would feed her every night in the pasture lot near Krantz’s pond. Dave was waiting for the right moment to attempt to capture her again. Then she bolted again.

Things settled down again for another week or two. Then, Dave Slater called me and said that the cow was caught! She was behind a fence on Brown Farms. Uh????? She simply walked home! Almost a mile away. Dave said she heard the cows on his farm bawling. There is a bull on Brown Farms? Did she head home for some romance with the bull? After being on the lam for more than ten weeks, after two attempts to capture her, she simply walked home. So, what is the moral of the story? The grass isn’t always greener on the other side of the fence? Until the Cows come home? Anyway, in my humbler opinion, this qualifies as the feel-good story of the year.

As part of writing this column, I googled the expression, “till the cows come home”. I share this with you as it seems to hit the nail right on the head:

·The saying ‘Till the cows come home’ - meaning and origin.

Cows are notoriously languid creatures and make their way home at their own unhurried pace. That’s certainly the imagery behind ‘till the cows come home’ or ‘until the cows come home’, but the precise time and place of the coining of this colloquial phrase isn’t known. It is a long-standing expression and the earliest example of it in print comes from the late 16th century.”

So, this concludes the story of Wild Child, the errant cow. Dave Slater is most grateful for the numerous people who contacted him with sightings of the cow. It was a community effort and a feel-good story.

Very happy to report that the Kenoza Lake Fire Company will be holding their annual Roast Beef dinner on Saturday, October 9th. TAKE-OUTS ONLY.

This month’s full moon falls on September 20 at 7:54 p.m. EDT and is known as the Harvest Moon. A Harvest Moon is the name given to a full moon that occurs closest to the autumnal equinox The first day of fall is 9/22.

Mets fans were ecstatic with the recent wins over the Yankees. The bases-loaded bunt was one for the record book.

No Kenoza Lake news column until after October 15th. I have a huge tax filing deadline on October 15th plus I am running for re-election as the Town of Bethel Tax Collector.