I am visiting my family in Florida and they planned lots of fun things for me to do. On Friday I went with my niece Amy and great nephew Jack to the Amalie Arena in Tampa Bay to see Dude Perfect. … 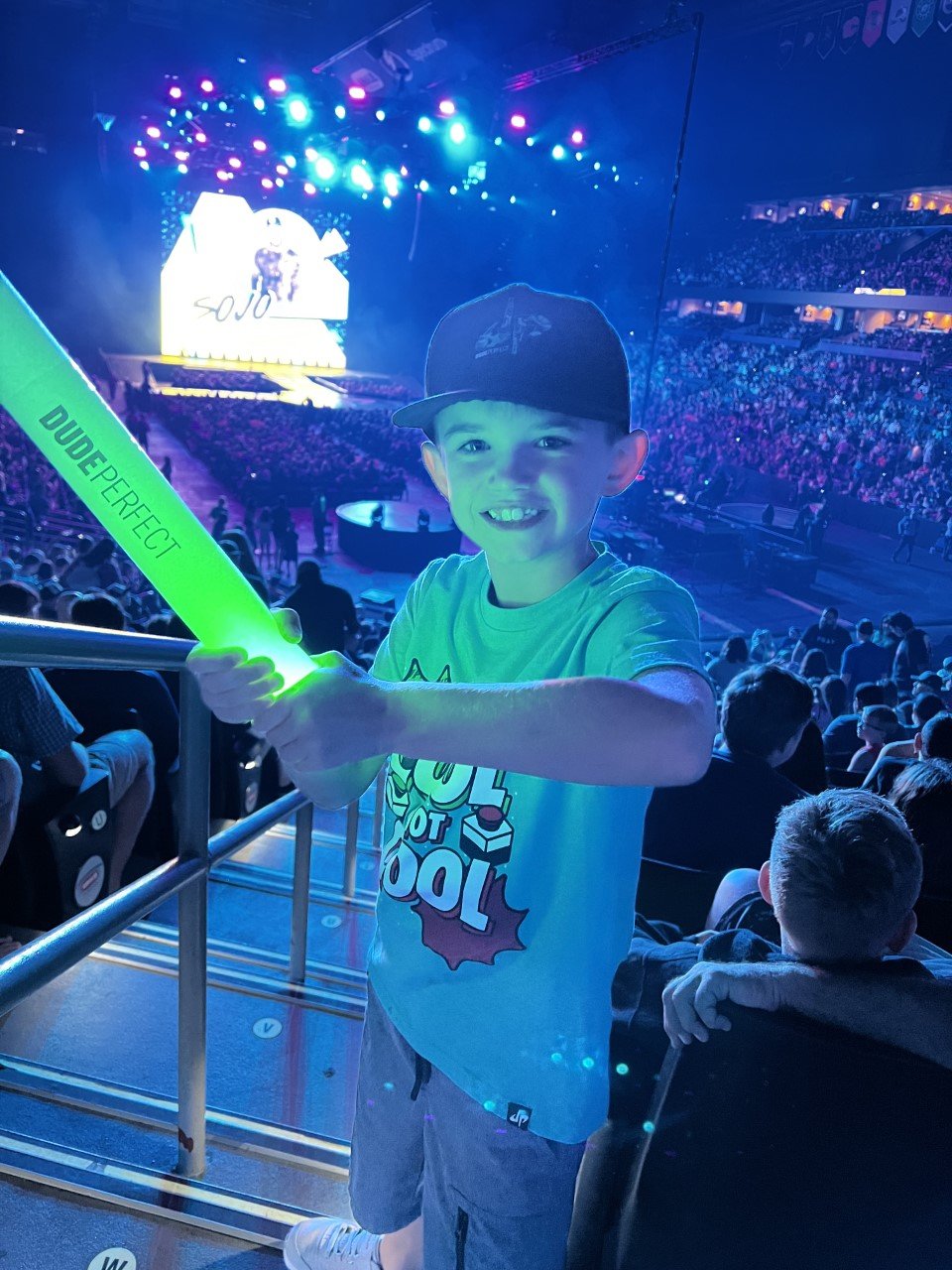 I am visiting my family in Florida and they planned lots of fun things for me to do. On Friday I went with my niece Amy and great nephew Jack to the Amalie Arena in Tampa Bay to see Dude Perfect. What, you may wonder, is Dude Perfect? Or why, you may wonder, was I the last one on the planet to hear about Dude Perfect? Either question is acceptable. You either know Dude Perfect or you don’t.

Dude Perfect is a group of five former college roommates who have become legends for their trick shots which are available on their YouTube channel. They have also become very wealthy, as they have 57.7 million subscribers on that site, and are currently the second-highest paid YouTubers. They make $20 million per year. By the way, they also do good deeds with their fame, using it to raise money for worthy causes.

The Dudes’ names are Ty (Beard), Garrett (Purple Hoser), Coby and Cory (the Twins) and Cody (the Tall Guy). Their live show, which is attended by their hordes of screaming fans, consists of a series of battles, game shows, audience participation, and general mayhem.

Typical tricks involve the Dudes shooting baskets after jumping on a small trampoline, attempting to throw footballs from high in the stands into a small pool onstage, and shooting an arrow to hit a distant cymbal. They also have audience participation. They bring kids onstage for a Dude Perfect trivia contest as well as a game called Wheel Unfortunate. This involves spinning a wheel with such choices as Box of Snakes (which appears twice), Eat a Live Cicada, Win a Bag of Cash (a very small wedge on the wheel), Pie in the Face, Clip Ned’s Toenails, and Bob for Apples in Mayo. Two young girls came onstage and one, of course, spun Box of Snakes. Luckily, the snakes were made of rubber. The other girl spun Eat a Cicada and she ate something that sounded pretty crunchy which she quickly spit out, but Amy assured Jack that it was chocolate.

You get the drift.

Dude Perfect’s target audience is male, with an emphasis on the 5-35 demographic. The arena was full of screaming fans and the lines for Dude Perfect merchandise were long and never got shorter. There may still be people in line there, for all we know. Niece Amy is a smart mama who ordered her merch online and had only to pick it up at the arena. No lines.

Overall, I have to admit that the live show was fast-moving and certainly exciting, interspersed with video clips of the Dudes doing what dudes do. There was even a blooper reel. It was loud, colorful, and entertaining.

And now, like over 57 million other people on the planet, you and I both know who Dude Perfect is.

Here & There: Beyond the News