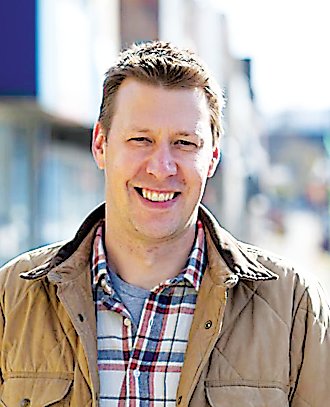 REGION  — Registered Democrats will head to the polls on August 23 to decide who will represent their party on the ballot in November’s general election to represent New York’s 19th Congressional District.

Attorney Josh Riley and business owner Jamie Cheney are both competing for the Democratic party line and the opportunity to take on Republican candidate and Dutchess County Executive Marcus Molinaro.

In a recent conversation with the Democrat, Riley spoke about his travels throughout the district, as well as his vision for the economy in upstate New York.

Ithaca-based attorney Josh Riley grew up in Endicott, New York, but said his ancestors have ties to Sullivan County, having lived in Callicoon for a time after they immigrated to New York City and before eventually settling in Broome County.

“It’s a special county and has a place in my heart,” Riley said.

Reflecting on his travels across the district, Riley says, “People are angry. People are frustrated and people want change … A lot of folks across this district are sick and tired of professional politicians who make the same old promises all the time and get the same old results.”

Yet Riley says these travels have also reaffirmed his belief that there’s more that unites people than divides them.

“We’re all not going to agree with each other on everything all the time, but we have to get back to a place where we’re treating each other with dignity and respect and trying to heal a lot of the divisions that we’re seeing in this country if we’re ever going to meet the big challenges we’re facing,” he said.

Riley first worked as an intern for former Congressman Maurice Hinchey, first in his Binghamton office and then as a staff assistant in Washington D.C.

“My time with Congressman Hinchey is a big part of what inspired me to take on a career in public service,” Riley said. “Congressman Hinchey was a champion for the environment and for working people … for a kid like me, growing up in a factory town in Broome County, to be able to walk the halls of Congress because of that opportunity was incredibly special for me.”

Riley says the loss of industry and well-paying, working-class jobs over the last generation is a story familiar not just to Broome County but all across upstate New York.

“We had a really proud history of good jobs that allowed people to earn a place in the middle class even if they didn’t have a college degree. Over the last generation we’ve seen a lot of those opportunities disappear,” Riley said.

Riley says he believes upstate New York is on the cusp  of a revival when it comes to certain industies.

He explained how he believes New York can leverage research and development conducted in the State University System (SUNY) toward clean energy storage for solar and wind power.

“I believe if we leverage funding that was provided in a recently enacted bipartisan infrastructure law’s battery material process program, and combine that with workforce training and apprenticeship opportunities in the upcoming reauthorization of the Workforce Investment and Opportunity Act, we will be on a path for having both the entrepreneurship and the industry, and also the skilled workforce to put us right on the cutting edge of innovation,” he said.

Riley pointed to other opportunities for economic development around the district, including sourcing ingredients at the Chobani plant in New Berlin, aerospace and national defense work in Oswego and Delaware counties and solar manufacturing work.

“I have a really hopeful, bold and optimistic vision for creating economic opportunity across the district, and I’m also offering a very specific plan to do it,” Riley said.  “I’m not going to make promises I can’t keep … but I can promise you I’ll work like hell to make sure we’re doing everything we possibly can to take advantage of these opportunities.”