Although there were a number of women who distinguished themselves in the earliest days of European settlement in this region, most of their names have been lost to time, and only a few of their … 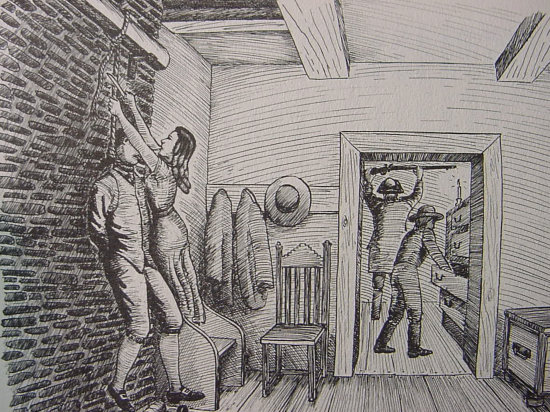 Young Phebe Reynolds cuts her father down after he had been attacked by Tories and hanged in his own home.
Contributed Photo | Sketch by Francis W. Davis for the Sullivan County Historical Society
Posted Friday, March 4, 2022 7:00 am
John Conway

Although there were a number of women who distinguished themselves in the earliest days of European settlement in this region, most of their names have been lost to time, and only a few of their stories survive. Phebe Reynolds’ heroism during the American Revolution is one.

Phebe Reynolds was born in Orange County in 1770, the daughter of Henry Reynolds, who later served as the first supervisor of the town of Neversink and as a member of the New York State Assembly.

Henry Reynolds was an outspoken patriot in the trying times of the Revolution, and a harsh critic of the band of Orange County Tories headed up by the notorious Claudius Smith. After Smith’s execution by hanging in 1779, the remaining members of his gang swore vengeance against all who had been active against him, and Henry Reynolds was near the top of that list.

Several unsuccessful attempts were made on Reynolds’ life before the incident in July 1782 that prompted Phebe Reynolds to rise to the occasion in total disregard for her own safety. According to James Eldridge Quinlan’s “History of Sullivan County,” a small band of men, headed up by Benjamin Kelley and Phillip Roblin, “went to Reynolds’ house in the night, and pretending to be a detachment from Washington’s army in search of deserters, he opened his door to them, after hastily dressing himself. He then hurriedly proceeded to procure a light, and while engaged at his fireplace with his back toward them, one of them struck him with the flat side of his sword, damned him, and told him to make haste. This conduct immediately revealed the character of his visitors.”

Quinlan relates that Reynolds engaged the men in a scuffle, and in doing so awakened his wife and seven children, as well as a young man who lived with them. The young man came to Reynolds’ aid, but “one of the gang seized him, threw him upon the floor, and told him if he turned his head to the right or left, they would cut it off. This so terrified the boy that he sat as still as if he had been made of stone.”

Mrs. Reynolds, “a timid woman, and pregnant at the time,” was likewise incapacitated by fear upon learning of the intrusion. Though Reynolds fought gallantly, he was seriously outnumbered, and was soon overwhelmed, wounded in several places by knives and swords. A noose was prepared and placed around his neck, and he was strung up on the trammel pole of his fireplace in clear view of his family, who were forced to watch.

Enter Phebe, a “large, robust girl,” still one month short of her twelfth birthday, but “as fearless as she was robust.”

While the Tories plundered the house, secure in the knowledge that Reynolds was slowly dying, Phebe found a knife, cut her father down, and led him to a bed, where she could tend to his wounds. Almost immediately, one of the Tories became aware of her actions, and he alerted the others, who “again gathered to murder Reynolds.”

“The dauntless girl boldly confronted them, and stood like a lioness at bay between them and the bed. They ordered her to get out of their way, and declared that they would kill her if she did not. She replied that she did not wish to live if they murdered her father.”

Phebe scuffled with the men, wounding one of them with his own sword, before being overpowered herself. Attaching herself to the prone body of her father in order to protect him, she was severely lashed by her assailants, an attack that left her “marked from head to foot with broad, angry stripes.”

Once again, they hanged Reynolds from the fireplace, and began ransacking the house. Again, Phebe cut her father down, only to be confronted by the gang, who cut and slashed father and daughter, leaving him near death and her “wounded in the forehead and breast, so that her face was covered and her clothing saturated with blood.”

The marauders then set fire to the house, trapping the family inside by placing a large boulder in front of the door, and fled. Phebe not only revived her father yet again, stopping the profuse bleeding of his numerous wounds, but was able to douse the fire, and escape from the house to alarm the neighbors.

A company of armed men started in pursuit of the ruffians, who were followed to their retreat in the mountains, and four or five of them killed.”

Henry Reynolds, cut and stabbed in over thirty places, survived the attack, though he was scarred and disfigured for the rest of his life. He accomplished much in his 85 years, none of which would have been possible if not for the heroic acts of his daughter.

Phebe Reynolds married Jeremiah Drake of Neversink Flats, and lived there until her death on November 21, 1853.