GOSHEN- Momentous and uplifting.Those positive and affirming adjectives do not begin to adequately describe the events of this past week in the riveting realm of Sullivan County track and field, … 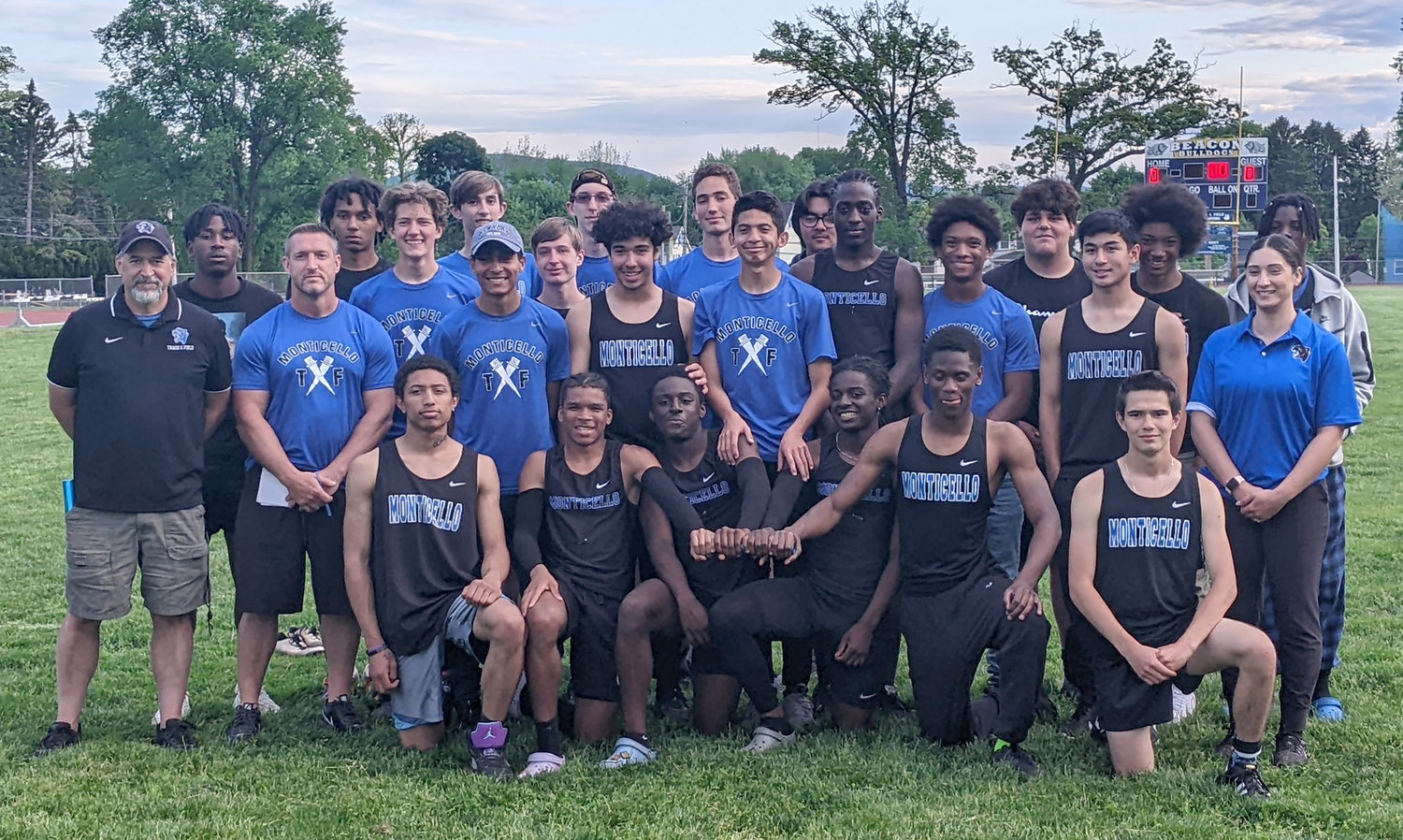 Monticello boys capture third Division title in a row and the 10th in the past 12 seasons with a convincing win over Beacon.
Contributed photo 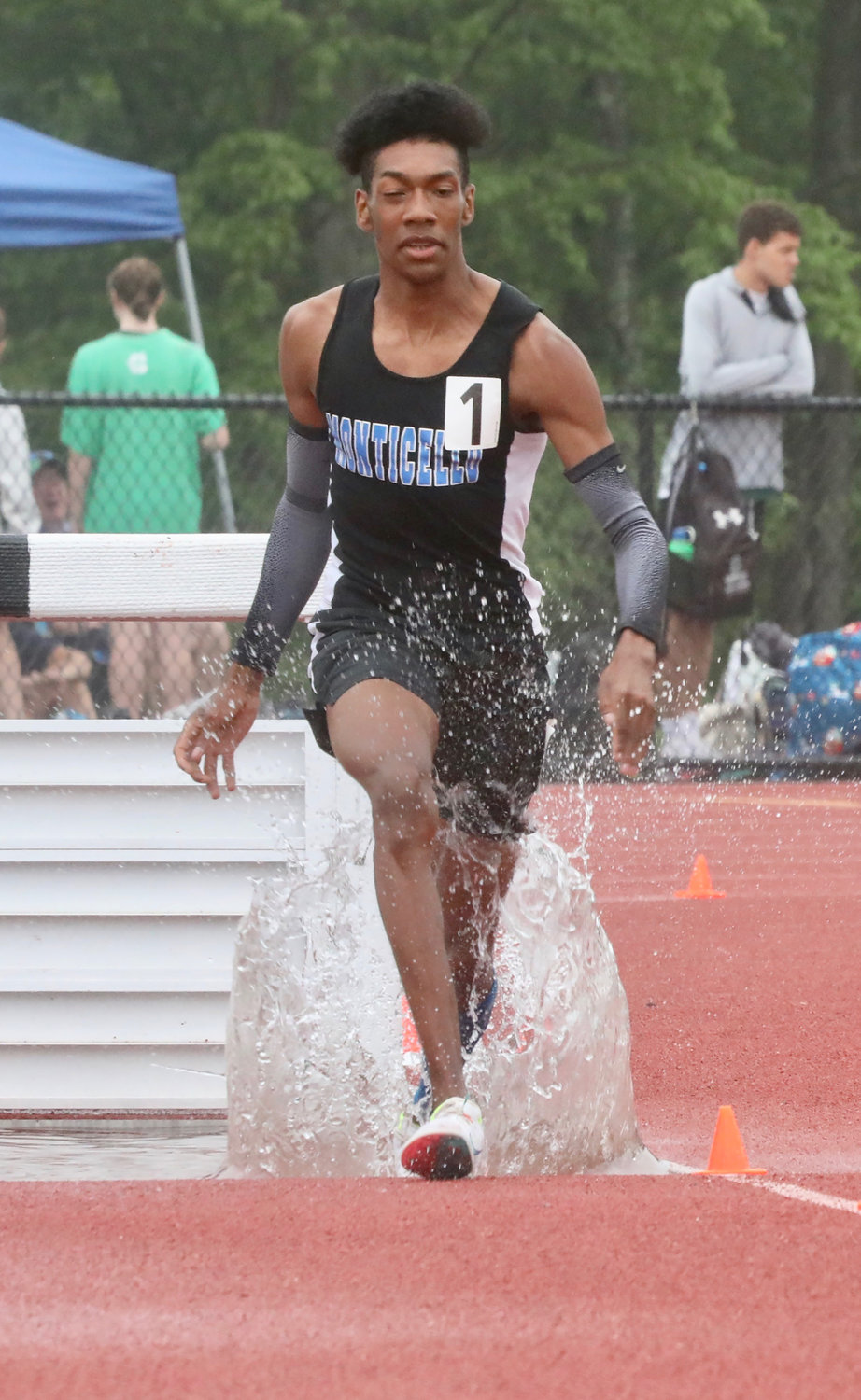 Monticello senior standout Evan Waterton captures the 3000 steeplechase. He handily won the trifecta of the 3200, the steeplechase and the 1600.
Richard A. Ross | Democrat 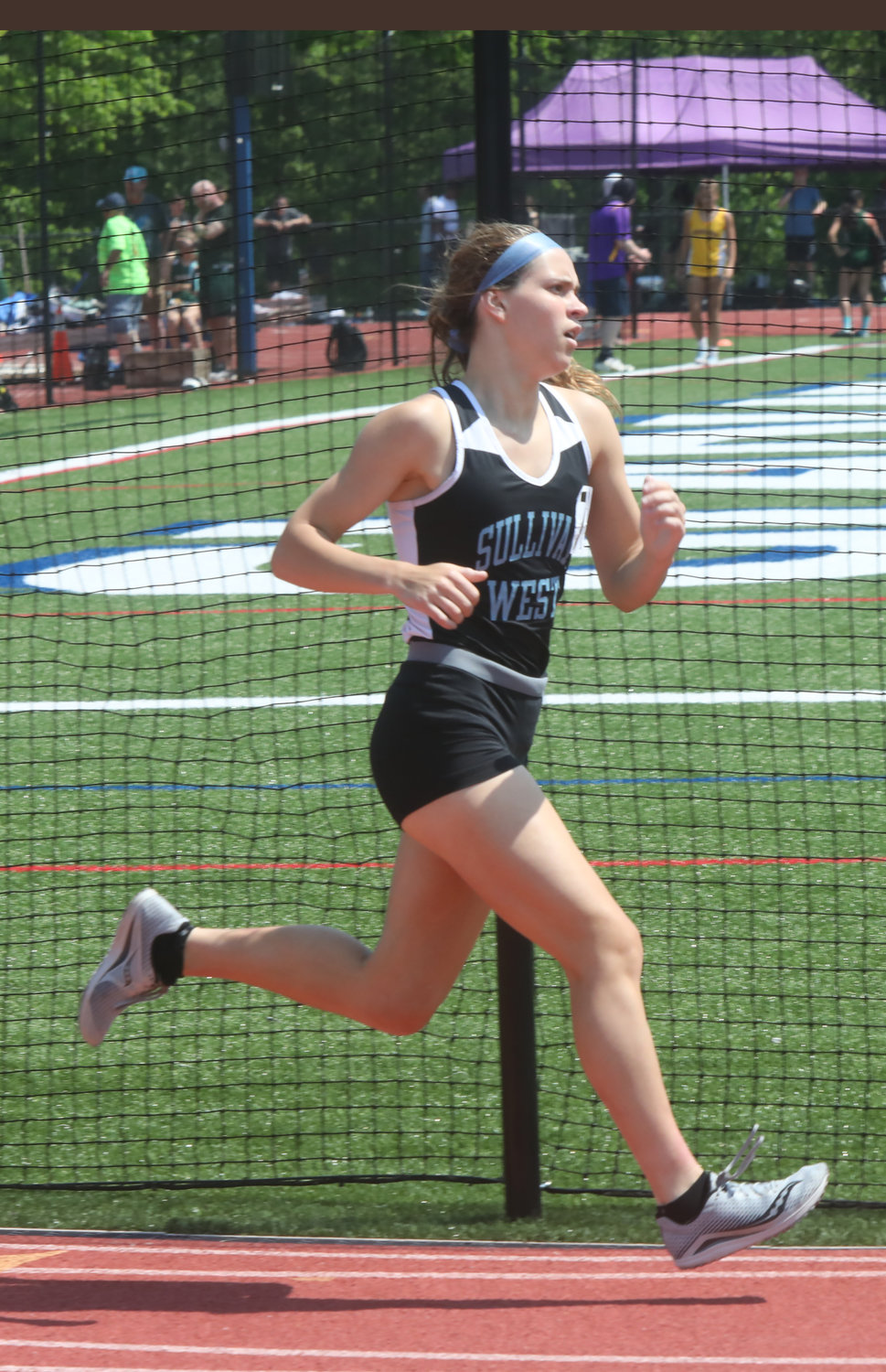 Sullivan West’s Grace Boyd added to her school track legacy by breaking the school record in the 1500. She finished fourth overall. She narrowly missed doing so in the 3000 and had already broken the school steeplechase record early this season.
Richard A. Ross | Democrat 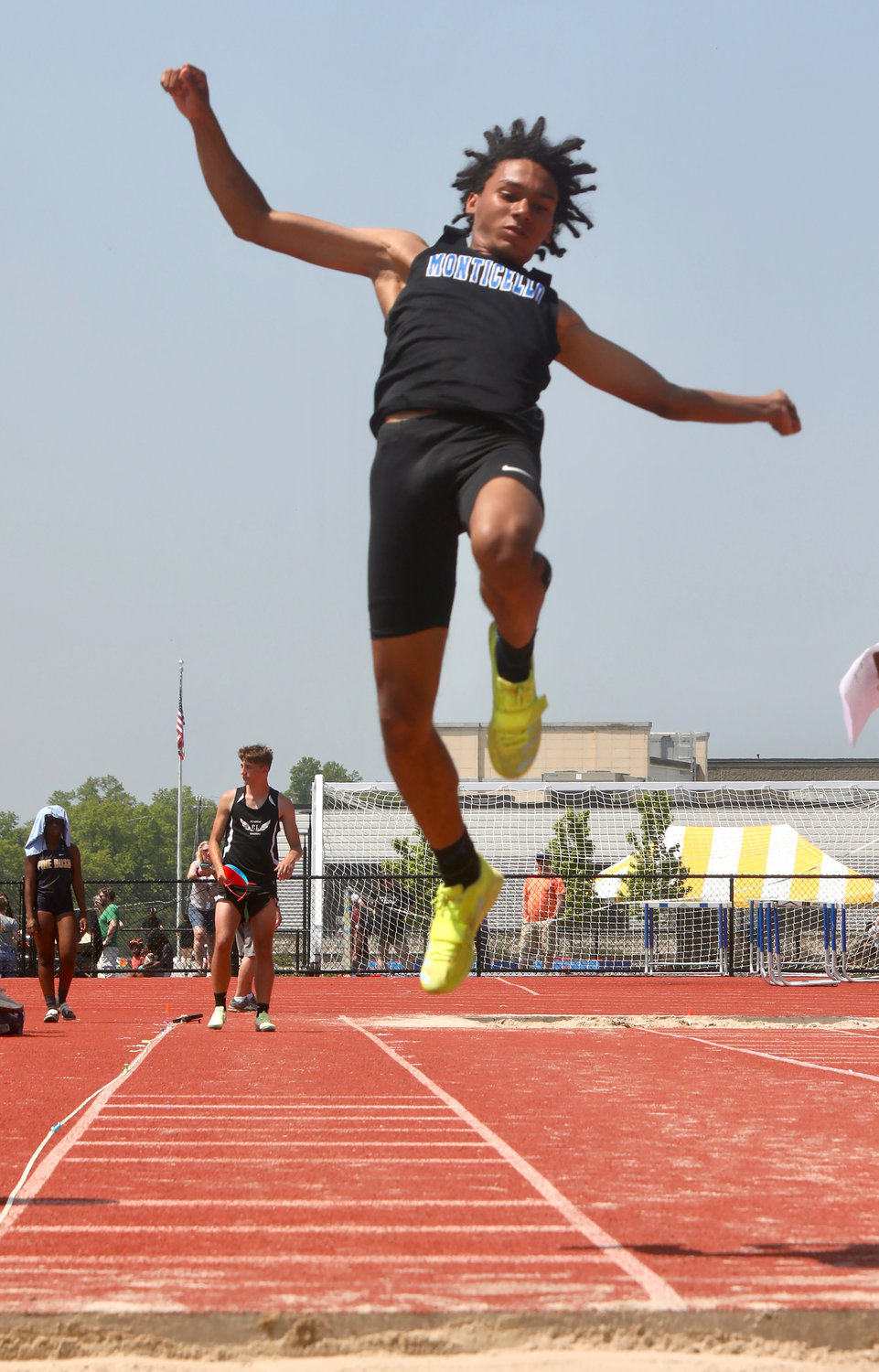 Monticello’s magical leaper Jadden Bryant had an incredible week. After sweeping all the long, high and triple jumps in the Division title win over Beacon, he won the high jump and the triple jump at the OCIAA Championships.
Richard A. Ross | Democrat 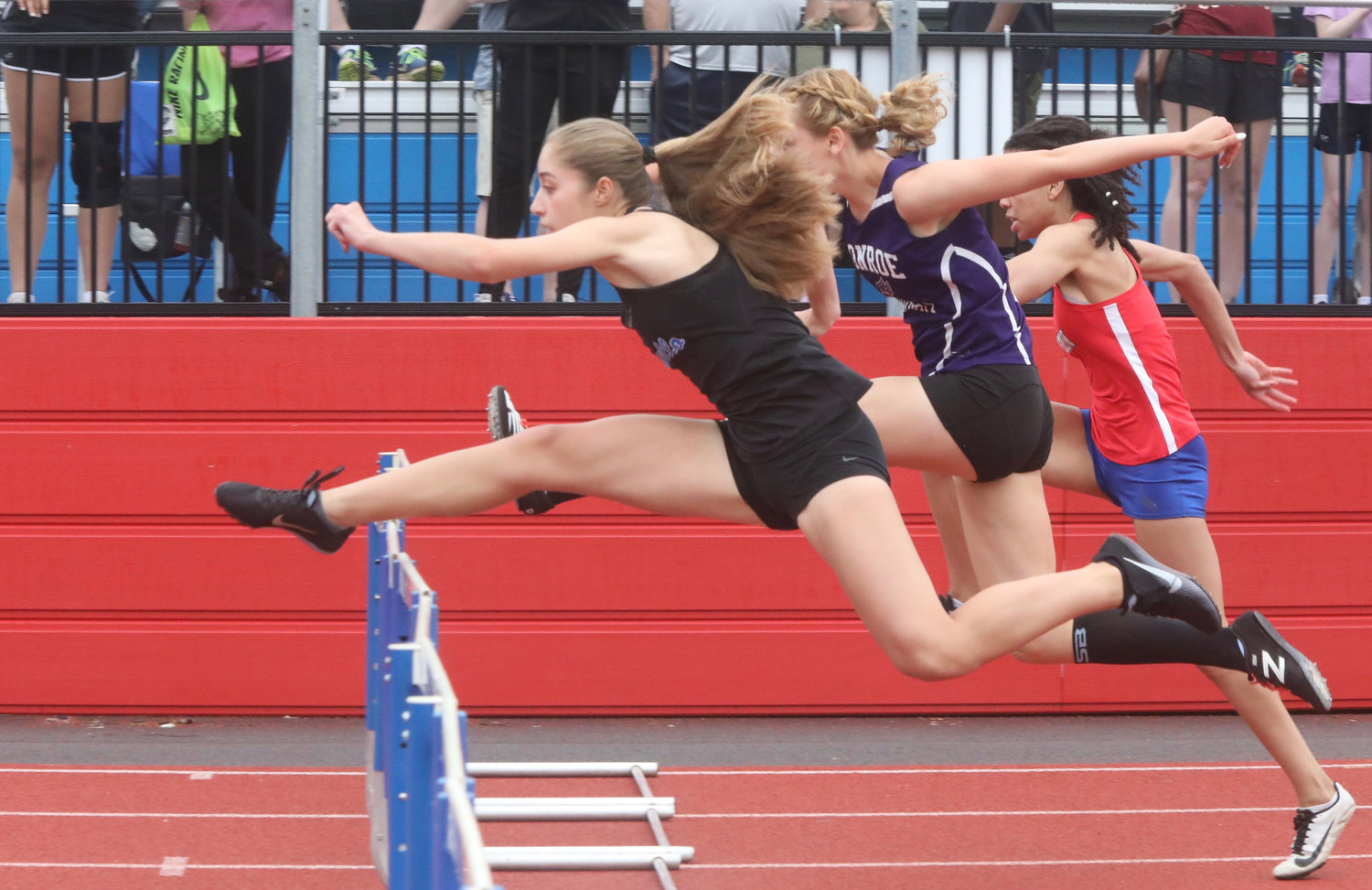 Monticello’s Taina DeJesus took second in the 100 hurdles and captured gold in the 400 intermediate hurdles.
Richard A. Ross | Democrat
Previous Next
Posted Tuesday, May 24, 2022 6:00 am
Results

GOSHEN- Momentous and uplifting.
Those positive and affirming adjectives do not begin to adequately describe the events of this past week in the riveting realm of Sullivan County track and field, particularly at its epicenter Monticello.

It all began with the Monti boys defeating Beacon 88-53 to clinch the Division III title for the tenth time in the past 12 years. Remember that the 2020 season was canceled due to Covid which makes this dynasty run even more astounding. This title was the third straight since that hiatus. The Panthers accrued division titles from 2010-2013, 2015-2017 and most recently from 2019-2022.

That said, looking ahead to clashes with Goshen and newcomer Beacon, he knew it would be no easy task. After handily beating Port Jervis and then putting Goshen away, Monticello headed to Beacon to try to prevail over the Bulldogs.

An early hamstring pull to sprinter Jadon Swasey had Buddenhagen concerned but Rohan Patrick stepped in and won the 100. Jadden Bryant won the high jump, long jump and triple jump. He is an extraordinary athlete and his leaps are poetry in motion.

Phenom Evan Waterton racked up 40 points with wins in the 400, 800, 1600 and 3200.
Waterton whose exploits are anything but surprising, even astounded Buddenhagen and his assistant Joe Seidl who is coaching Waterton and other distance runners by turning in a 1:55 in the 800 only 12 minutes after his speedy quarter mile win. Jesse Corces won the shot put and the discus. As it turned out, Beacon was no match for the Panthers.

The Monti girls also handily defeated Beacon. Hurdler Taina DeJesus continues her ascent back to greatness in both the 100 and 400 hurdles. The boys’ Division win turned out to be just a preamble to the feats accomplished at the OCIAA Championship meet staged over two days with Friday’s events held at Warwick and Saturday’s at Goshen.

On Friday, the day where many of the races were preliminaries or semifinals, two champions were crowned, and they were both from Monticello. Waterton sped to a win in the 3200 and Bryant cleared 6-0 to win the high jump. Waterton would go on to capture the trifecta with wins in the 3000 steeplechase and the 1600. He was far and away the meet’s most outstanding track athlete. Bryant would pop off a 45-01.50 triple jump. He took fifth in the long jump.

The Montis piled up more points in the pentathlon courtesy of Quenten and Raphael Liciaga, sprint finishes from JuJuan Swasey and RJ Patrick. Fifth place finishes in the 4x100 and 4x400 relays added more points as did a sixth in the 4x800.

Another impressive result of the OCIAA meet was Sullivan West’s Kathryn Widmann setting a new personal record in the shot put at 34-2.25. Widmann holds the school record for girls in that event.

Here are some other big performances from this past weekend’s meet!

SW’s Chris Campanelli wins the discus and shot put with PR’s in both events
It’s been an epic year for the Big Fella. His football exploits this past fall are nothing short of legendary. Then, his post presence in basketball was vital to the Bulldogs reaching sectionals. And now he is icing the cake with his throwing performances in the shot put and discus.

Confidently chasing Alan Ackerman’s shot put record of 50-10 set at the state meet in 2007. Campanelli got closer yet with his first place throw of 48-02 at the OCIAA meet.

Campanelli moved into second all time in the school’s discus hierarchy with his first place throw of 144-05. Ackerman holds that record too at 167-01 also notched in 2007.

Oh boy, that Grace Boyd!
Before she leaves for the Division I University of Buffalo track team, Sullivan West senior Grace Boyd will have left her mark on the school record pages. She already broke the 2000 steeplechase record this spring with a time of 7:50.86 at the Cornwall Steeplefest.

Against the smaller schools, the boys are unmatched, and the girls are quickly ascending. For the boys a Section Nine title is a near certainty (again) and a run at the state crown to add to their cross-country state title is a distinct possibility.

At the OCIAA meet the results were more muted but some are worth noting: Furman finished second to Waterton in the 3200 and 1600. Van Furman broke the school freshman steeplechase record of 10:32 set in 1998. At the OCIAA he posted a 10:10 finishing fourth behind three seniors including teammate Caleb Edwards. His time places him first among freshmen in the state in the event.