Ten county track and field athletes to compete at states

MONROE WOODBURY AND GOSHEN –– For the vast majority of Sullivan County runners, jumpers and throwers, the Section IX track and field championships followed by the Warwick Fast Times …

Ten county track and field athletes to compete at states 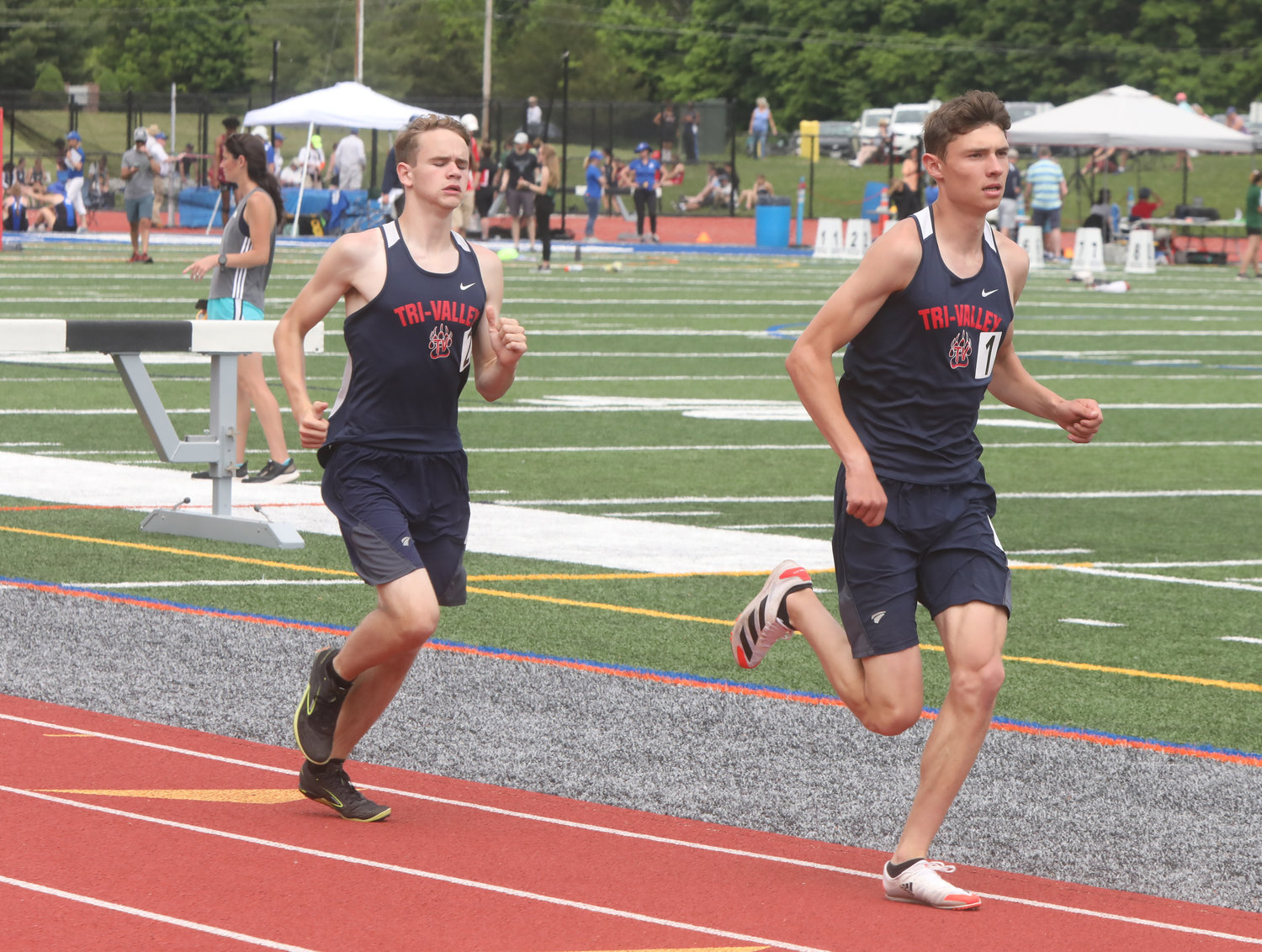 Tri-Valley’s Adam Furman (right) and Craig Costa will join teammates Caleb Edwards and Van Furman to compete in the Division II 4x800 relay at the state championships this coming weekend at Cicero North High School in Syracuse. Furman will also vie in the 3200 and the 1600, while Edwards will contend in the 3000 steeplechase. These four Bears are part of the ten athlete county contingent going to states this spring.
Richard A. Ross | Democrat
Posted Tuesday, June 7, 2022 6:20 am
Richard A. Ross

MONROE WOODBURY AND GOSHEN –– For the vast majority of Sullivan County runners, jumpers and throwers, the Section IX track and field championships followed by the Warwick Fast Times Relays and the Marlboro Throw Off meet, represented the last hurrah for this year’s glorious track and field season. For the seniors amongst them, those final moments in their careers will remain longstanding memories. For the top contenders from each team though, the two-day state qualifier staged at Monroe-Woodbury high school and at the Goshen Coliseum, remained the last chance to not only evince their personal bests, but to also qualify to perform on the grandest of stages, the NYSPHSAA track and field championships, which will play out at Cicero North High School in Syracuse on June 10-11.

To compete at the state qualifier, athletes had to meet or exceed the state standard. A rare few got to go to states by meeting what is known as the “superstandard,” an average of the top fourth place time or distance at the last five state meets in their event. Only the top finishers from Division 1 schools (with enrollments of 600 or more) and Division II (less than 600) and second place finishers who met the state standard, got to punch their tickets to states. This year, Sullivan County will send ten of its finest to vie for medals and commensurate glory against the very best from New York State’s other ten sections and subsequently, if they are victorious, against New York City’s Public School Athletic League winners (PSAL), the Catholic High School Athletic Association’s victors (CHSAA) as well as the Association of Independent Schools (AIS) in the Federation match ups.

This year’s state county slate of state contenders includes the following: Monticello’s Evan Waterton in the 3000 steeplechase (9:37.28) and the 3200 via the superstandard of 9:15.44, fellow Panthers Jadden Bryant in the high jump (6-3) and Taina DeJesus in the 400 hurdles (65.48). Sullivan West is sending seniors Chris Campanelli who finally broke Alan Ackerman’s record in the shot put with a heave of 52-03.50 and Grace Boyd, who added her school record-breaking performance in the 3000 of 11:02.30 to prior school records set this spring in the steeplechase and the 1500.