Stumpy: The bear with three legs

JEFFERSONVILLE -- Steve Cappello had been watching a bear cross through his Jeffersonville property throughout 2020, seeing him every couple of days.

Stumpy: The bear with three legs 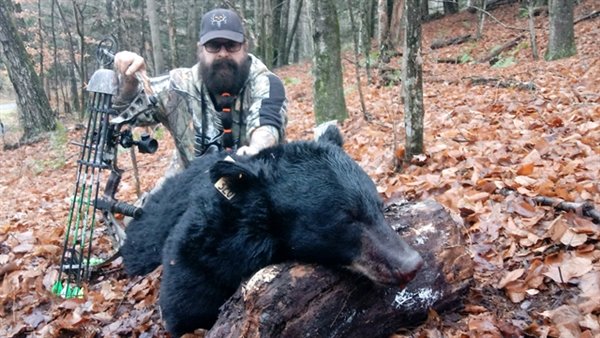 Steve Cappello with his bear take this past November. The bear, with only three legs, was nicknamed “Stumpy.”
CONTRIBUTED PHOTO
Posted Monday, January 4, 2021 12:00 am
Joseph Abraham - Co-editor

JEFFERSONVILLE -- Steve Cappello had been watching a bear cross through his Jeffersonville property throughout 2020, seeing him every couple of days.

Once bear season came around, Cappello decided to hunt a bear for the first time with his bow. On November 11, he harvested the bear, which he then realized had only three legs.

“I've never seen a bear with three legs before,” said Cappello of the first bear he's ever taken. “Leave it to me to catch something unique like that.”

The bear was once tagged by the New York State Department of Environmental Conservation. After calling it in, Cappello learned that “Stumpy” was a little too friendly at a fish hatchery back in 2018. But at the time when he had been caught and released, he had all four legs.

“So sometime between then and 2019 he must have lost his leg,” said Cappello who added that it was all healed up.

“This bear not only managed to stay alive with three legs but managed to live pretty well. He was a big bear,” said Cappello, who said it had successfully torn up some tree stumps on his property.

While taking “Stumpy” was a rather unique circumstance, Cappello, a past winner of the Sullivan County Democrat Big Buck Contest's Heaviest Deer division, capped off his 2020 hunting campaign with a five-point buck during rifle season.