How many of our local golfers remember when the golf course at Swan Lake was built?Information on the web pages say that the Swan Lake Golf Course opened in 1950, while other information indicates it … 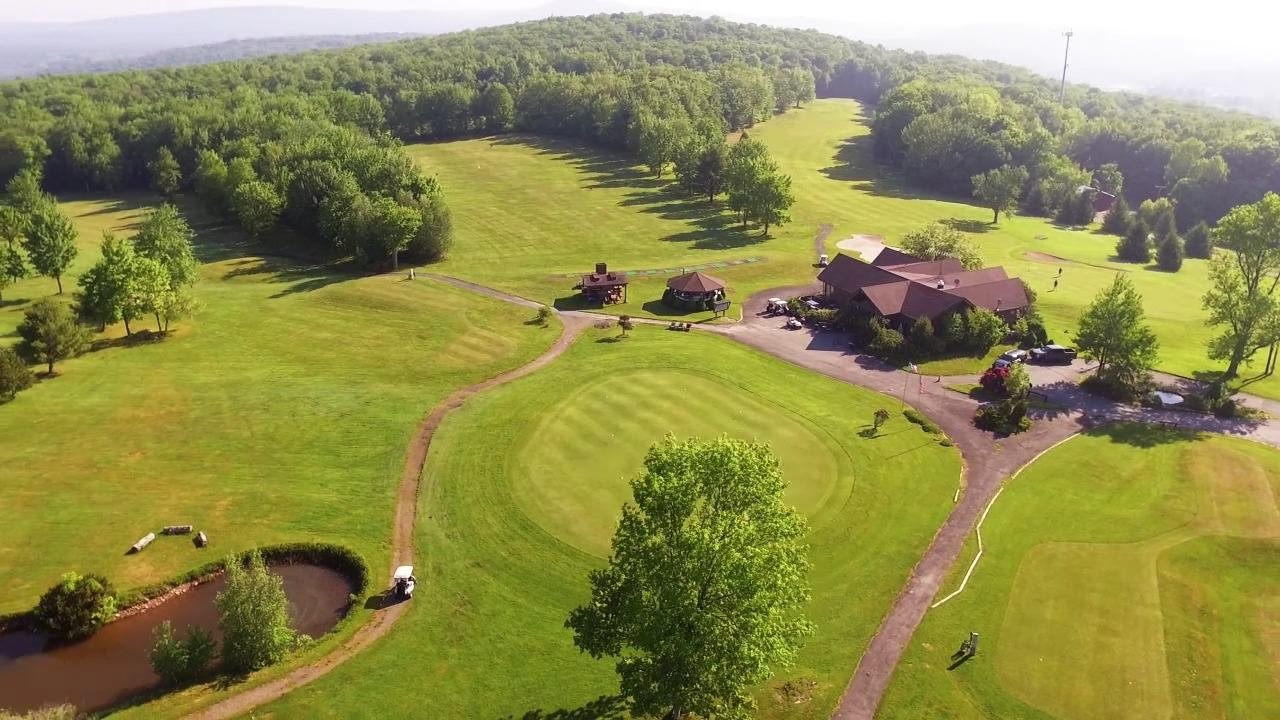 A beautiful aerial photo of the heart of the Swan Lake Golf & Country Club, showing the Club House and Restaurant facilities, the ninth fairway and green, the practice putting green, the driving range and the 10th tee.
Contributed photo 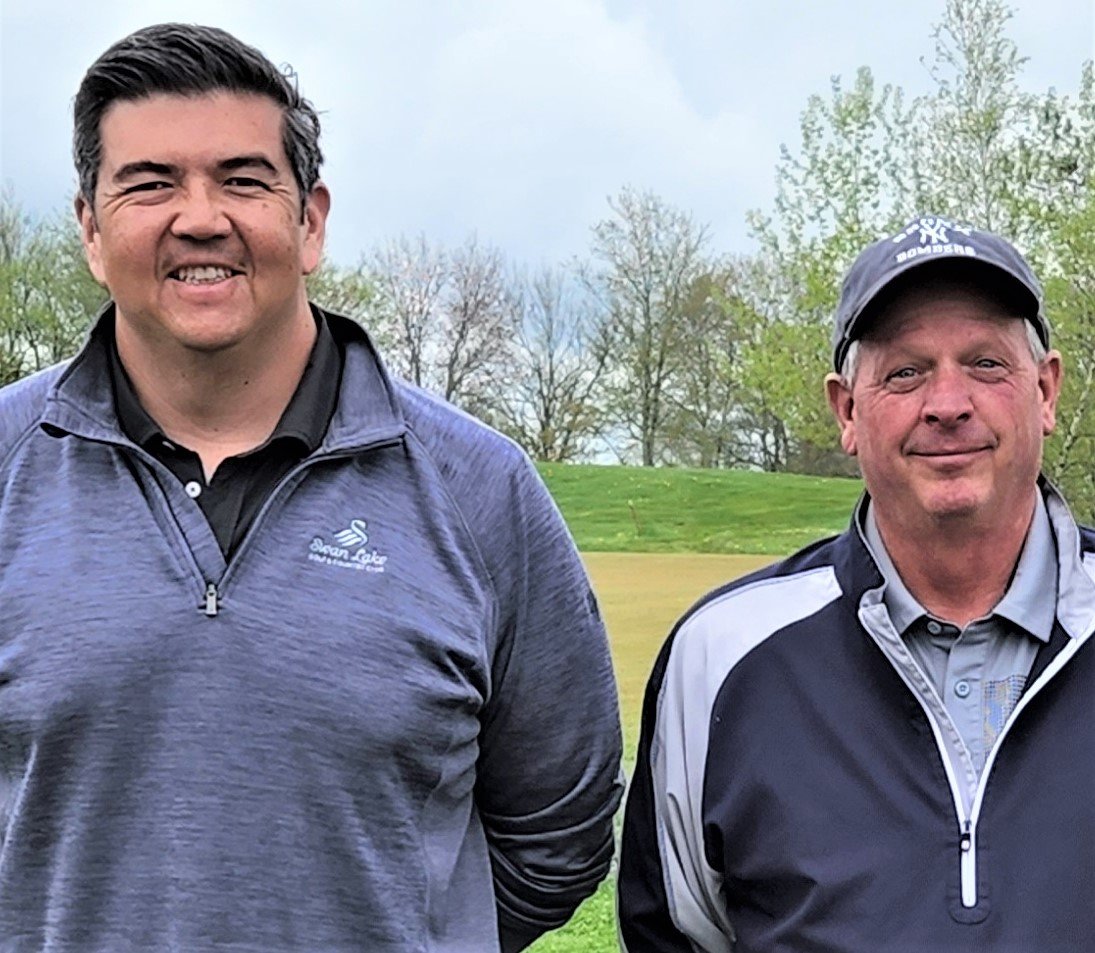 The wheels that keep golf alive at the Swan Lake Golf & Country Club include, from the left, Todd Gallo, who is the general manager for the Gallo family owners, and Bob Menges, head golf professional.
Contributed photo
Previous Next
Posted Friday, May 20, 2022 4:11 am
By Ed Townsend

How many of our local golfers remember when the golf course at Swan Lake was built?
Information on the web pages say that the Swan Lake Golf Course opened in 1950, while other information indicates it was built in the mid 1960's.

Another interesting question is, what was the original name of this golf facility? It was originally called the Stevensville Country Club and was part of the former Stevensville Hotel.
All hotels in those early years had golf courses associated with them.

The Gallo Family purchased the facility in 1990 and changed the name to the Swan Lake Golf & Country Club. They also built a new clubhouse and restaurant, making the combined facilities one of the most attractive golf clubhouse restaurants at that time in the area. The restaurant is now operated as a snack bar and includes a large cocktail lounge.

The golf course and restaurant, located at Mt. Hope Road, is owned by the Gallo family and managed by General Manager Todd Gallo.

The 18-hole Swan Lake Golf & Country Club features 6,580 yards of golf from the longest tees for a par of 72. The course rating is 71.8 and it has a slope rating of 132 on Blue Grass.
William F. Mitchell, ASGCA, designed the golf course.

Also included at the course is a large putting green and a driving range.

Many golfers challenge the 1st hole, which is a dogleg left, by taking their tee shot over the corner of the tree line and an open second shot to the green.

The 477-yard par 5 third hole plays tough if the flight of your golf ball goes right or left of the fairway. Going left brings water into play, while the right is a sloped uphill fairway. Straight and long is your best bet here.

Swan Lake features a Tuesday Men's league, Wednesday Men's, Thursday Ladies Fun league and on Monday and Friday morning there is a choose-up and anyone can show and play.

Bob Menges has been the head professional at Swan Lake Golf & Country Club for 18-years.
He started playing golf at the age of five at the Waldemere Golf Course and played extensively as a kid while growing up in the Finger Lakes area at Waterloo, NY at the Silver Creek Golf Club.
In his teenage years, Bob won multiple Junior League championships as well at two Club Championships.

He then took a break from the game while attending East Stroudsburg University studying Physical Education.

Bob started in the Golf Business at the Swan Lake Golf & Country Club in 1996 as an Assistant Golf Professional under Steve Eisenberg.

He spent four years at the Steve Eisenberg Golf Academy at the Huff House, which was called Eddy Farm Hotel at the time.

Menges served one year as the Head Golf Professional at the Wallkill Golf Course in Orange County and three years at the Tennanah Lake Golf & Tennis Club before returning to Swan Lake.

By now the golf world is shaking its head and many are asking: Where's Phil?
Well, the fact is that Phil Mickelson won't defend his crown at the PGA Championship.

The PGA of America published a statement saying that it was, "Solely Mickelson's call to make."
The statement added, "Phil is the defending champion and currently eligible to be a PGA Life Member, and we would have welcomed him to participate.

Phil's agent, Steve Loy, suggested the move is designed to keep the champions' options open.
PGA of America Seth Waugh said that the tournament's reigning champion was indeed considering whether to re-emerge from a month long hiatus at the season's second major championship.

The golf world has said that Phil is trying to figure out when the right time is, and if he is mentally and physically ready to do it.

And so the exile continues, with Alan Shipnuck's explosive biography, with revelations to come out in excerpts that the PGA champion has a $40 million gambling debt accrued over a four year period last decade.

Phil has been inactive since Feb. 6.

Some reports say the great lefty's absence from the tour is credited to his connection to the proposed breakaway league backed by Saudi Arabia, but Phil says, "They're scary folks to get involved with, and they have a horrible record on human rights."

Many golf fans love Phil and all they want to see is him on the golf course winning championships.

Go to Your Pro Shop
A fellow golfer broke the golf club shaft on his four iron, and after the round we headed back to his home and his garage.

Shafts can be replaced at golf pro shops and most golf stores, but my fellow golfer says it is also a fairly easy project to do yourself, so he has been told.

I love to watch what is said to be a fairly easy project.

The first encounter with a broken club shaft is to insert the broken shaft into the vise and remove the shaft by using a heat gun.

I immediately sensed a problem here. When using heat on the shaft what temperature should the heat gun produce?

Better know some of these principles or this little job of replacing a broken shaft may end up with a lot of frustration and more problems then a broken shaft.

I could see the frustration building up in this little project and suggested to my fellow golfer that we take the broken shaft over to the nearby golf pro shop.

I know the pro there and in no time he replaced the broken shaft with little effort and a minimum price.

Just proves a point. The pro shop is the correct place to repair golf clubs.

Golf Tip
By Robert Menges
Playing for a Number
Many golfers will put a number on their round before they start to play.

We have all heard someone say, "I hope to shoot a 45 or lower today."

I always try to help golfers improve their game by trying to get them to focus on each individual part of their game, not a score before they start.

This happens mostly with golfers when they are involved in some type of competition, whether it be a weekday league, a match or a tournament.

I hear it many times with high school golfers before they begin playing.

I believe golfers put too much pressure on themselves if they are thinking about a score.
If they have a bad hole they start thinking negatively and it can affect the whole round.
I believe to perform at your highest level you should think about your next shot.

This keeps your mind in the moment and can make you think positive.

We always hear the professional golfers talk about staying patient and thinking positive. I think if you just try to think about each shot you face during the course of your round, you might find that your scores will improve.

Robert Menges is the head golf professional at the Swan Lake Golf & Country Club, Mt. Hope Road, Swan Lake. Call to see if he is available for private lessons and if you have a question or subject you would like covered, he can be reached at 845-292-0323 or 845-866-5567 or via email at bobmenges22@gmail.com

Ed Townsend is a Public Relations Consultant to the sport of golf and brings over 60-years of sports journalism experience in writing and compiling the information for this column. If you have league or tournament information, shoot a hole-in-one or score your age let Ed know at 845-439-8177, email to bght75@gmail.com or fax to 845-205-4474. View this column at http://bght.blogspot.com We are also on Facebook and Twitter.