The dash for District Attorney

The dash for District Attorney 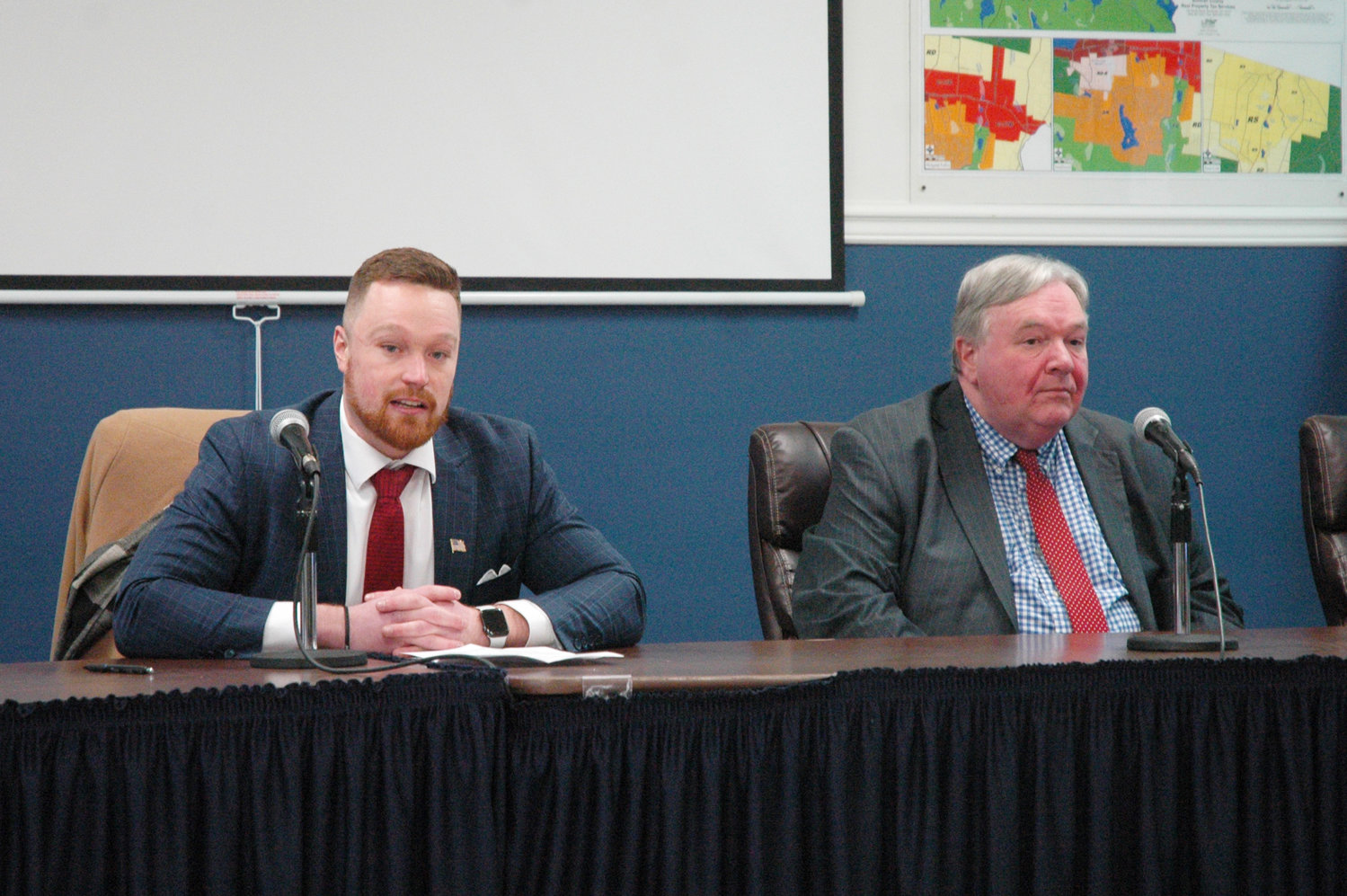 A forum was held between acting Sullivan County District Attorney Brian Conaty and Sullivan County Deputy County Attorney Thomas Cawley as the two prepare to face off in a potential primary before November for the spot on the ballot for the DA position.
Derek Kirk | Democrat
Posted Tuesday, January 24, 2023 6:10 am
by Derek Kirk

WHITE LAKE – Democratic Party leaders from around the county gathered at the former Duggan School in the town of Bethel on January 21 to hold a forum in preparation for the upcoming election for District  Attorney. A potential primary is brewing between acting Sullivan County District Attorney (DA) Brian Conaty and Deputy County Attorney Thomas Cawley.

Come this November, in addition to the nine legislature seats being on the ballot, an election will also be held for the DA position. Conaty took office earlier this year and has been acting DA since the ascension of his predecessor and former DA, New York State Supreme Court Third Judicial District Justice Meagan Galligan.

As the Democrat previously reported, Deputy County Attorney Thomas Cawley announced his intention to run against Acting DA Conaty earlier this month. Cawley got his start in Sullivan County over thirty years ago after he graduated from Hofstra Law School and took a position as the eighth assistant district attorney under former DA Steve Lungen. Since then, he has worked his way up the ranks to where he is today.

The acting DA said that despite his young age, over the last four years he has worked in every jurisdiction in the county. Conaty went on to say that he has developed a positive working relationship with the many local law enforcement agencies, including various town and village police departments as well as the Sullivan County Sheriff’s Office.

The Democratic Party Chair from the town of Liberty, William Liblick, asked the candidates to address any rumors of any possible intentions to change political party affiliations later on down the road.

Both Cawley and Conaty answered that there are currently no plans to do so.

Liblick also asked the candidates to address the opioid and illegal drug crisis that plagues the county. Conaty, co-chair of the Sullivan County Drug Task force alongside co-chair Wendy Brown, said that he wants to “go after the head of the snake,” in terms of taking down large-scale drug dealers, as well as continue to support programs such as Hope Not Handcuffs.

Cawley stated that he hopes a portion of the settlement money will be allocated to some of the treatment programs that are “sorely needed” in Sullivan County.

Town of Bethel Democratic Chair, Moreen Lerner, asked the candidates their thoughts on altering the District Attorney’s Office to operate via “vertical integration” rather than horizontal. Both candidates agreed on the idea that this change would be a positive one, as it would attract and retain younger attorneys to the area.

The goal of the change would also be to cut down on the backlog of felony cases built up over time, allowing younger and more inexperienced attorneys to work on a greater number of these cases, garnering greater experience in the courtroom.

The horizontal integration is designed to separate inexperienced attorneys from felony and criminal cases, leaving them to look after smaller, civil cases. According to the candidates, this hurts the chances of young attorneys staying in Sullivan County and continuing a career here.

Lerner went on to ask if the candidates could use the approved five-year opioid settlement earnings for hiring more attorneys in the future. DA Conaty said that the money from that settlement is intended to be used to purchase more TruNarc Test Kits.

Another attendee asked the candidates their thoughts on the recent bail reform laws and the amendments that followed since its installment at the State level in 2020.

Conaty said that the State legislature has taken measurable steps towards being able to set monetary bail in specific cases, but there is still a long way to go.

Cawley stated that the bail reform laws were an “overreach” when they were originally passed, and that the they “handcuffed the hands of the police and the prosecutors.”

Sullivan County Democratic Committee Chair Anne Hart asked the candidates to give a message to voters and why they should vote blue this November. Cawley stated that he believes that the past has proven that Democratically-run legislatures are more successful – with his message to voters being “do you want to see a change?”

Conaty said his message to voters is that he is a “young and energetic candidate” and that he wants to help “redefine” what he can in the DA’s office. He said that he wants to energize voter participation from young people at the polls in November.