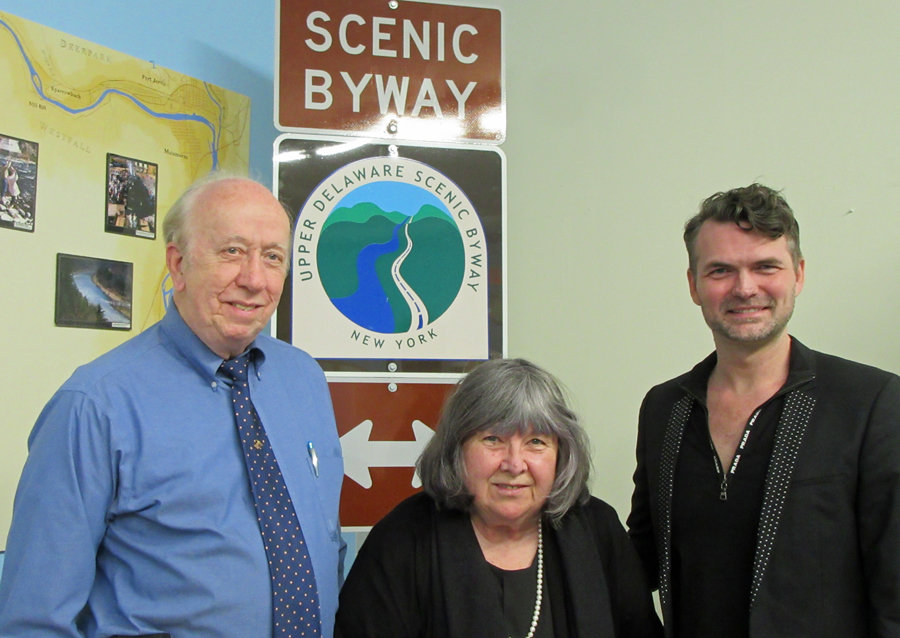 NARROWSBURG – The Upper Delaware Scenic Byway (UDSB) Committee elected officers at its April 25 annual meeting to lead the non-profit organization which promotes and protects the outstanding character, heritage, and beauty of New York State Route 97 and its communities, while encouraging economic development through tourism and recreation.

The Hancock Village Board appointed Lowe to the UDSB board in January of this year. It coincided with his accepting the position of Director of Regional and Economic Development for Hancock Partners, Inc., a non-profit organization that has focused on stimulating, producing and evaluating growth in the Hancock region since 2003.

Originally from Manchester, TN, Lowe became a full-time Hancock resident in the Fall of 2020. He has more than a decade of experience in the fashion world, offering design and consultation services to leading industry firms, as well as a background in immersive marketing, trend forecasting services, and heritage branding for American-based businesses.

Lowe trained in Fashion Design and International Trade & Marketing at the Fashion Institute of Technology (FIT) in New York City, after earning an undergraduate Psychology degree from Vanderbilt University, a joint Master’s in International Affairs and Business Administration from Harvard Kennedy School, and an International Certificate in Non-profit Management from Oxford & Berkeley University.

Lowe serves as vice-president for the Hancock Area Chamber of Commerce. Volunteer efforts have extended to community projects by the Delaware Valley Garden Club, Hancock Rotary Club, Hancock Community Education Foundation, and Friends of the Upper Delaware River. He helped raise funds to build phase one of the Hancock Hounds Dog Park, is involved with upgrading the Junction Pool River Access, and hopes to implement a major town rebranding initiative with beautification, cultural, historical, and recreational elements.

Lowe and his husband, Michael-John Stevenson, live in the Hancock village limits and have a PomChi dog named Cosmo.

Vice-Chairperson Rosie DeCristofaro has been the Town of Delaware’s representative on the board since the majority of Route 97 was added to the New York State Scenic Byways System through legislative action in 2002.

DeCristofaro is Broker/Owner of Callicoon Real Estate, LLC. She was elected Vice-President of the Sullivan County Board of Realtors for 2022.

She is also actively involved with the Callicoon Business Association, serving as its vice-president this year.

DeCristofaro lives in Callicoon with her family.

Secretary-Treasurer Larry H. Richardson has also served on the UDSB board for all 20 years. He was elected vice-chair at the first meeting following UDSB’s June 2, 2003 incorporation, chaired the group from 2005-2008, and first assumed the office of Secretary-Treasurer in 2009.

Now retired after 30 years as an executive with the Yaun Company, Richardson is a former Cochecton Planning Board member (1988-1995), town councilman (1995-2015), a four-time past chairperson and ongoing town representative for the Upper Delaware Council since 1989, and a founding member/ treasurer of the Cochecton Preservation Society. He also serves as a director on the boards of Garnet Health Foundation – Catskill, Grover Hermann Hospital Auxiliary, and the Fosterdale Cemetery Association.

UDSB, Inc. voting members are the Village of Hancock; the Towns of Delaware, Cochecton, Tusten, Highland Lumberland, and Deerpark; the City of Port Jervis; and Sullivan County. Each participating municipality appoints a representative and alternate(s).

The organization’s purpose is to implement the goals and objectives of the Upper Delaware Scenic Byway Enhancement Concept plan, including byway appearance, safety, and relationship to the Delaware River; promotion, preservation and marketing of the byway’s history, recreational and cultural resources, and unique communities; and development of interpretive materials and visitor facilities.

The UDSB Committee meets monthly on the 4th Mondays at 7 p.m. in Narrowsburg. For more information, email info@upper-delawarescenicbyway.org or call the 866-511-UDSB toll-free hotline.