Sullivan County’s reputation as one of the premier vacation destinations in the northeastern United States dates back to the late 19th century, when the railroads serving the area began … 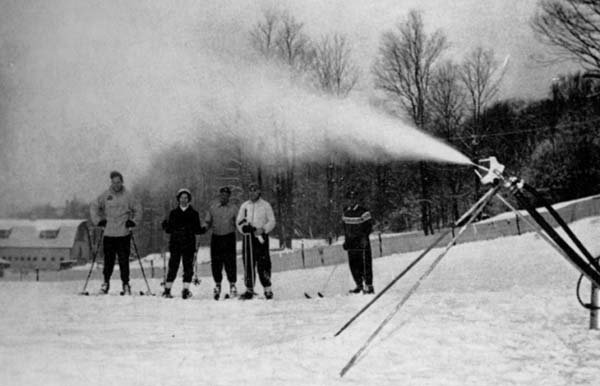 An early snow making apparatus at Grossinger’s, circa 1956. The Concord in 1952 and Grossinger’s in 1953 were pioneers in snow making in the northeast.
Contributed photo
Posted Thursday, January 27, 2022 7:00 am
John Conway

Sullivan County’s reputation as one of the premier vacation destinations in the northeastern United States dates back to the late 19th century, when the railroads serving the area began aggressively marketing the region.

And as early as the 1920s, the county was beginning to develop a following in winter that, while it did not approach the summer trade in magnitude, showed every indication of growing into a significant source of revenue for local businesses.

In fact, following Washington’s Birthday weekend in 1941, Grossinger’s “the largest of the winter sports resorts” reported that it had entertained “the largest number of guests in its history, winter or summer.”

“Not only was the hotel itself filled, but overflow crowds were housed at affiliated places in Liberty village,” the Liberty Register newspaper reported on February 27, 1941. “Guests at all of the resorts expressed themselves as well-pleased with the Sullivan brand of winter sports. At Grossinger’s, a complete list was available-- ski races, skating, tobogganing, and indoors entertainment and dancing.”

The Register reported that Monticello resorts were also “filled to capacity and overflow accommodations were also filled.”

And in its January 22, 1953 edition, the Register reported that “greater effort than ever before is being made this winter to make Sullivan County in the Catskills a year-round vacationland. More hotels are open and four ski centers are operating.”

Furthermore, in a sentence that should forever settle the longstanding question of whether the Concord or Grossinger’s was the first in Sullivan County to make snow for skiing, the article in the Register continued:

“Two of the resort hotels—Grossinger’s and the Concord—are not particularly worried about snow. Grossinger’s at Ferndale is using a snow-making machine for the first time while the Concord at Kiamesha Lake has expanded its snow-producing unit, installed last year. Skiing facilities at these resorts are open to the public.”

The article also pointed out there were ample opportunities for winter activities at other hotels, specifically highlighting the Youngs Gap and the Avon Lodge, and that entertainment provided by Broadway and Hollywood stars and the “excellent cuisine for which the county’s resorts are especially noted, continues to be an outstanding attraction.”

Despite the growing winter business at the hotels, however, there were many in the county—and in county government—who felt that there was not enough being done to organize and promote winter events outside the hotels.

An article by reporter Leslie C. Wood in the January 21, 1965 edition of the Register more or less summed up the feeling of many in the county.

“Sullivan County has gotten the ball rolling on winter sports events, but it has a long ways to go before it begins to tap the real potential that is here,” Wood wrote. “And the reason more Sullivan County villages do not take advantage of the great influx of outside money which can be brought in with these events is because of lack of initiative or effort. This, it seems, also extends to the promotion of other projects.”

Wood wrote that telephone interviews with a number of local “business and promotional leaders” made it clear that more needed to be done in the county to stage and promote events to draw winter crowds to area restaurants, gas stations, and motels.

Other than the annual ice carnival in Livingston Manor and a snowmobile rally in White Lake, he noted, there was precious little planned for the winter months in the county.

“With the tremendous advantage of being so close to New York, Sullivan County should be so crammed with winter events that not a single weekend or even a day should go by without some winter activity, was the conclusion after the interviews.

“One authority on Sullivan County declared that in the list of winter events in a pamphlet put out by the State Department of Commerce, Sullivan has virtually no mention… Another county resident familiar with the situation asserted that ‘it is easy to suggest, but unless someone picks up the suggestion and works it to a conclusion, everything is lost.’”

Homer Millard, the county’s Director of Publicity and Development, promised that his department was putting together a new brochure for release “very early in 1965” that would “combine hunting and fishing information with data about golfing, skiing, tourist attractions, and suggested tours. Road distances, fishing waters, and areas of state land holdings will also be listed.”

Many locals argued the county’s efforts were much too little much too late, and before another year had passed it had become obvious that the county’s Golden Age of tourism had come to an end.