MONTICELLO - Watching Monticello junior guard Aaliyah Mota in action, one would presume that she is the product of years of grooming on the hardwood. Everything she does on the court bespeaks that … 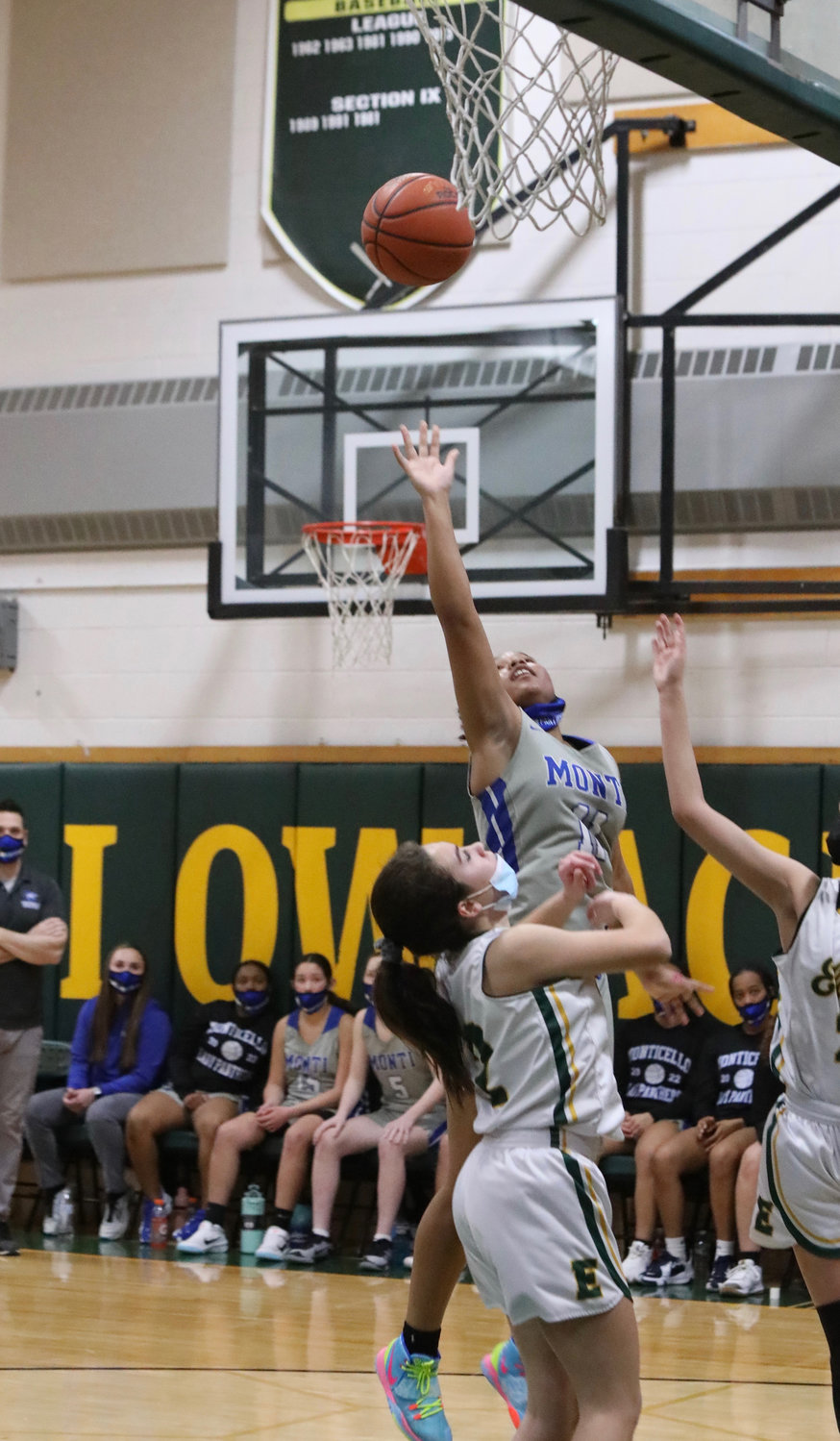 Monticello junior Aaliyah Mota rises up for two versus Eldred in the game that clinched the Lady Panthers' first sectional berth in years. Mota was an integral part of Coach Ryan Jasper’s rebuilding of the program and expedited his 5-year plan into just three.
Richard A. Ross | Democrat
Posted Friday, March 25, 2022 6:20 am
Richard A. Ross

MONTICELLO - Watching Monticello junior guard Aaliyah Mota in action, one would presume that she is the product of years of grooming on the hardwood. Everything she does on the court bespeaks that kind of training and pedigree including a year-round regimen, travel team campaigns and input from a variety of coaching influences. Guess again. It’s none of the above. This girl is a rarity indeed.

Her coach Ryan Jasper, a three-time winner of the Sullivan County Democrat Coach of the Year honors, refers to her as “a generational talent.” Jasper goes on to say, “she has been a starter for us since eighth grade. She is a very special player and an exceptional person. She is the best basketball player I have ever coached,” he avers resoundingly.

Considering the caliber of some of Jasper’s former players, that is quite a compliment. “Her athleticism is literally off the scale,” he adds.

All of this from a young woman whose relationship with the game began casually in elementary school as she started to watch and play the game that was to become her calling card. It seems she hadn’t yet understood the role it was to play or her capacity to impact the game in such a dominant fashion. Thus, when seventh grade rolled around, she didn’t opt to join the modified team.

But such talent is hard to hide, so the following year Jasper spotted her talent in gym class and just like that she landed a starting position on the Lady Panthers junior varsity team. That tour of duty was short lived and by the outset of her freshman year she became a starter on varsity.

“At first I was a little overwhelmed playing against older girls,” she recalls. But almost instinctively she began to find her niche.

Jasper made sure to let her know that he saw her as an integral piece of the puzzle as he began to rebuild the program which had fallen on hard times prior to his taking it over. And so, young and relatively unschooled as she was, her athleticism and character acted as catalysts towards her meteoric rise. And with that ascension was born the reincarnation of Monticello girls basketball that resulted this past season in the team making sectionals having started four years prior with a winless campaign.

Jasper had originally foreseen a five-year body of work to achieve that milestone. Instead, it was really done in three years considering the Covid-Canceled 20-21 season. And the spark that lit that flame and then became a conflagration is Aaliyah Mota. Asked what she loves most about the game, she replies, “It’s the teamwork, the working together to create an identity.”

In truth, Mota embodies all of the attributes listed above that define an exceptional athlete and one more not mentioned: unselfishness. As good a shooter as she is or the talent she evinces in driving and creating her shots, her first instinct is not to shoot.

“I don’t like to be selfish. I want everyone to contribute,” she adds.

She sees the biggest challenge in trying to help develop team chemistry. As a point guard, she functions as the coach on the floor making key decisions. Aside from one season training with Gym Ratz, Mota does nothing formal to prepare for the basketball season. She doesn’t play any other sports and her conditioning comes from bike riding. She is very mindful of eating the right foods and of keeping hydrated.

Jasper smiles when all of this comes up. “Can you imagine? She’s so athletic without all of that off-season play.”

Mota’s dad Harry works with her and plays against her as well as providing some drills for her to do. Her mom Lisa is a fixture at games while her dad is working. Their support is important and Mota is very appreciative of the role they have played in encouraging her. Needless to say, they are very proud of her. Looking ahead to next year she muses, “We’ve made sectionals. Now we want to go further.”

She says that Coach Jasper has some plans for them this spring to keep them on the page. Though Monticello came into this season under the radar, that began to change as the season progressed and Mota began to see some double teaming against her. “That made me better as I like to pass and get other people involved. Doubling up on me created more openings for others.”

Leadership is vital for a team and Mota knows that though her nature is to be quiet and laid back, that she is going to have to assume that role on the floor. Someone must be the team general; the person other players will look to when things are going south.

Mota feels that basketball has made her more confident, outgoing and better able to face adversity. “It’s helped me cope with stress, including school.”

She reveres Jasper who has shown a tremendous commitment to his coaching. Mota appreciates that and moreover, his role in her life. To him, her teammates, her family, the school and community, Aaliyah Mota is a rising star, a great player, person and indeed, an athlete extraordinaire, well deserving of the title, Athlete of the Winter.