ELDRED – Camp FIMFO (Fun is More Fun Outside), the $44.9 million project intended to take over the campsites formerly run by Kittatinny Canoes in Barryville, received criticism from numerous … 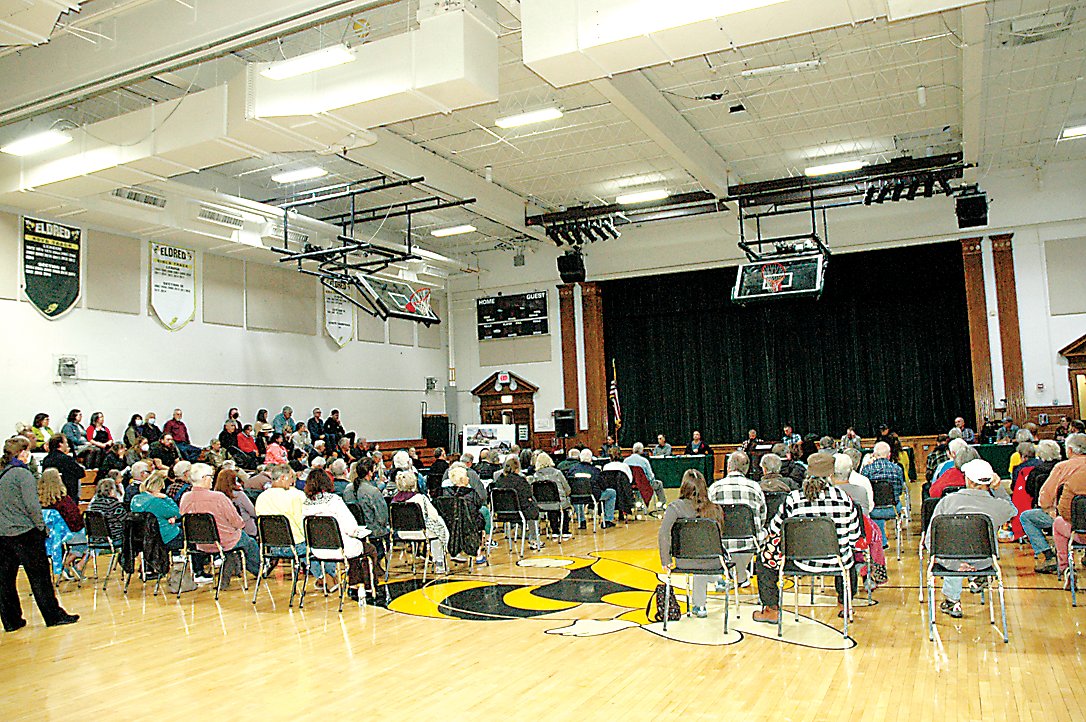 The Highland Planning Board meeting regarding Camp FIMFO filled half the gymnasium at the Eldred Junior Senior High School on September 28
Derek Kirk | Democrat
Posted Tuesday, October 4, 2022 6:10 am
by Derek Kirk

ELDRED – Camp FIMFO (Fun is More Fun Outside), the $44.9 million project intended to take over the campsites formerly run by Kittatinny Canoes in Barryville, received criticism from numerous commenters at the Highland Planning Board public hearing at the Eldred Junior Senior High School on Wednesday, September 28.

It was stated by the Town of Highland Planning Board Chairman, Norm Sutherland, that the applicant initially came before the Board in March, and that the project was previously reviewed by numerous organizations.

Sutherland also stated that in addition to there being a “full-house” of potential commenters, the Planning Board received 37 letters regarding the Camp FIMFO project, which he said were not to be read aloud but posted online for the sake of time.

Before public comment was opened up to the floor, an overview presentation was given by a representative of the applicant.

Owned by Northgate Resorts, Camp FIMFO already has two sister locations developed in Waco and New Braunfels, Texas. At a previous presentation put on by the Sullivan County Partnership for Economic Development on September 15, it was noted that the project would create roughly 89 full-time jobs, with nine of those being manager positions. It is expected to total around $2.5 million in wages.

Marc Baez, CEO and President of the Sullivan County Partnership for Economic Development, spoke before the Planning Board.

“There could be, in our view, no better economic project than taking a site that’s already in use and turning it back into a more useful economic stimulator,” Baez said. “This project is going to be positive in the community.”

However, over 25 people spoke critically of the project.

One of the worries voiced by members of the public were of where and how the housing would be created and sustained for 89-plus workers and employees of the future camp.

Additionally, representatives of Camp FIMFO also noted previously that the water usage would equate to roughly 34,000 gallons per day, with 29,000 gallons a day for the septic systems. These numbers sparked comments from neighbors concerned about the quality of the water in their own wells nearby.

Worries of water usage and sewer practices were a focal point for many dissenters of the project before the Planning Board. A number of people were anxious about sewage making its way into the Delaware River and causing problems for the environment.

In addition to an outdoor swimming area geared towards children, the plans outline campsites designed for RV’s, and a mountain coaster.

There were concerns over the potential influx of RV’s in the area and their status as semi-permanent camping structures.

The mountain coaster was also under scrutiny from a handful of commenters, saying that it was not necessary to the success of the project, that it could disturb the natural balance of the Bald Eagles and other wildlife living in the area, and that the noise could disrupt the daily lives of the neighbors of the campsite.

As a result of these concerns, the desire from the crowd for an independent environmental study increased as more and more people requested this extra step be taken in the interest of the protection of the Delaware River and other natural surroundings.

Baez told the Democrat that the questions asked during the public comment  were vaild, and that the organizations invloved were comfortable with the steps that are being taken.

Following the process, the National Park Service has until November 10 to complete their review and then communicate with the Upper Delaware Council, who in turn will communicate the findings to the Planning Board.

In anticipation of these reviews, the Highland Planning Board did not take any official action regarding the project, but voted to recess the meeting until they meet again on October 26.

The Democrat reached out to Kittatinny Canoes General Manager Rocco Baldassari and Northgate Resorts Regional Operations Manager Brian Czarnecki but did not receive a response by press time.