Eight-man season ready to kick off

SULLIVAN COUNTY - As summer winds down and students are returning back to school, the start of fall sports has arrived. A culmination of summer practices and scrimmages will come together this week …

Eight-man season ready to kick off 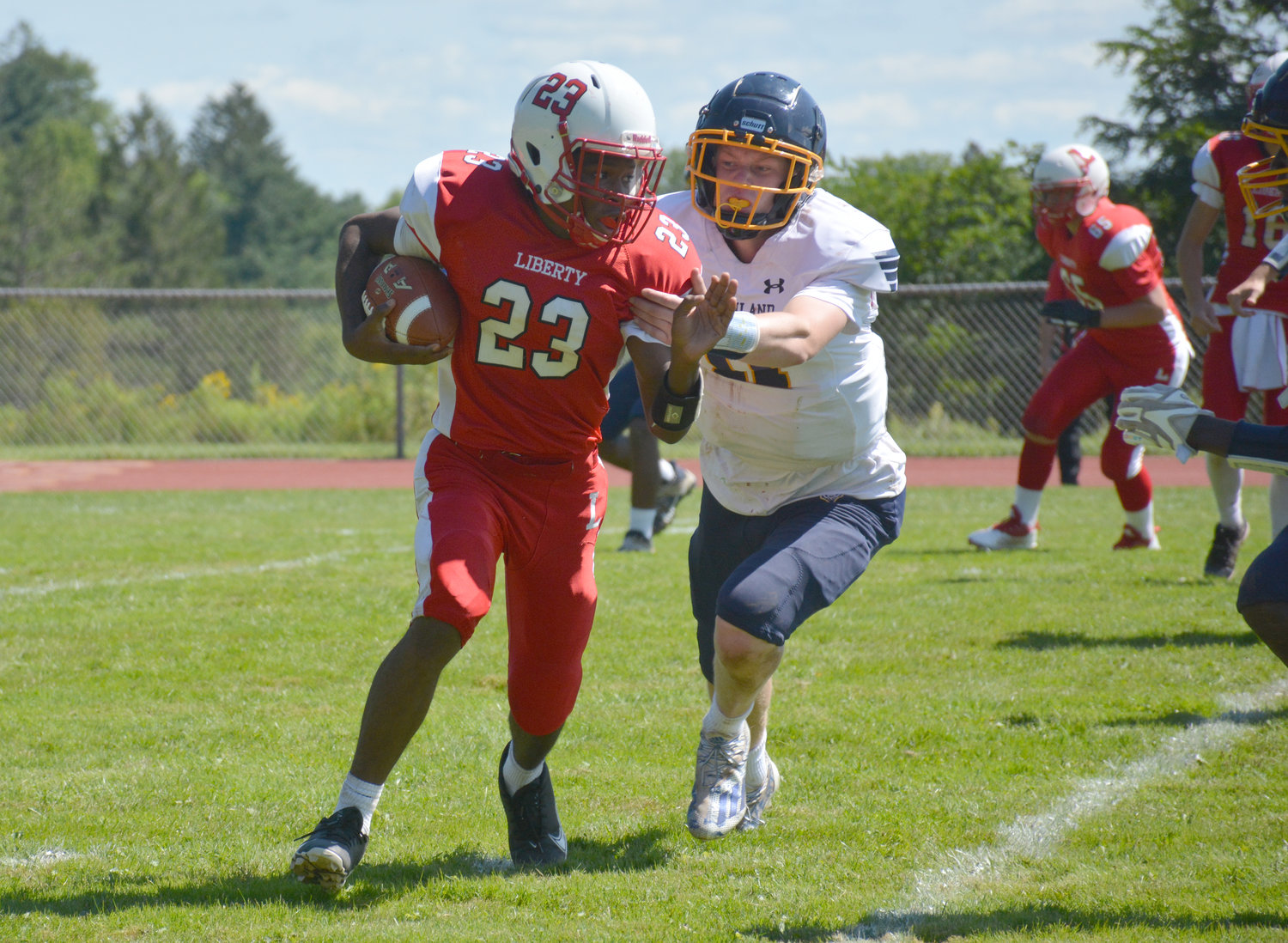 Liberty’s Giovanni Dudley evades a Highland defender. The Indians fell to the Huskies, 32-6, in their season opener last Saturday. Liberty Coach Adam Lake said despite the loss, several positives came from the game. To read the full story about the game, visit scdemocratonline.com.
Joseph Abraham | Democrat
Posted Friday, September 10, 2021 8:56 am

This game is going to be a chance for the new group of guys to step up and gain some experience, and we’re looking forward to a good, competitive game.”
Roscoe Football Coach Mike Hill
By Anthony Morgano

SULLIVAN COUNTY - As summer winds down and students are returning back to school, the start of fall sports has arrived. A culmination of summer practices and scrimmages will come together this week as most of the county schools are primed to make their 2021 season debuts.

As the first full weekend of high school football is upon us, here’s a breakdown of what to expect as six county schools host games ...

Fallsburg is looking to put their best foot forward tonight in their season opener against Dover.
Fallsburg finished 0-2 in last year’s shortened season.

The Bulldogs finished second in their division last year, losing to Roscoe/LM twice. With the new season set to begin, expect them to try and build off of last season’s success.

Liberty finished 0-4 last season but will look to put that in the past with this week’s only high school league football game against Port Jervis. The two teams did not play each other last season, so they will re-ignite the rivalry this Saturday.

Liberty is the only football team in the county that played last week. They suffered a 32-6 loss to Highland on Saturday, so they will be looking to get back in the win column.

Tri-Valley ended their season last year hovering right around the .500 mark, and with Kevin Crudele taking over as the new head coach with Greg Botsford stepping down, the team will look to improve upon last year’s record.

The non-league matchup will give the new head coach and new Tri-Valley team an opportunity to stand out.

Wrapping up Saturday’s action is a rematch of last season’s Section 9 Eight-Man Football Championship.
The Blue Devils, who finished 4-0-1, will host Pawling. Pawling shut out Roscoe’s high powered offense in the championship, defeating them 34-0.

Roscoe will look to avenge that loss in front of the home crowd this Sunday.
Ahead of Tomorrow’s matchup, Roscoe Coach Mike Hill said, “This game is going to be a chance for the new group of guys to step up and gain some experience, and we’re looking forward to a good, competitive game.”