LOCH SHELDRAKE – SUNY Sullivan hosted their first game after being named the Number 1 team in the Country for the NJCAA. Unfortunately for the Generals, a Covid-19 ravaged unit fell just short … 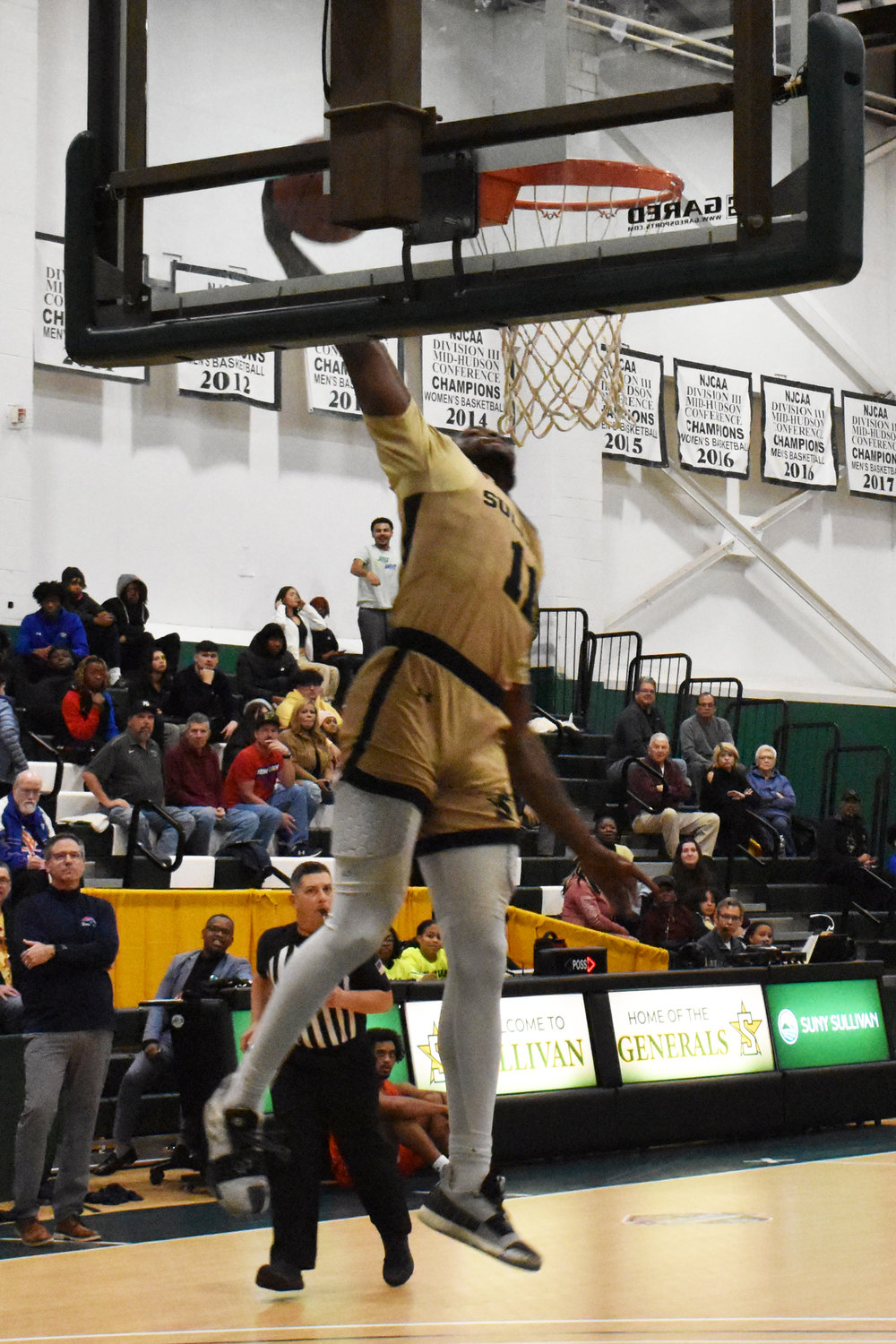 Kipplyn Richvine throws down an authoritative dunk in the early going against SUNY Orange. The Generals battled until the final whistle but came up just short.
Anthony Morgano | Democrat 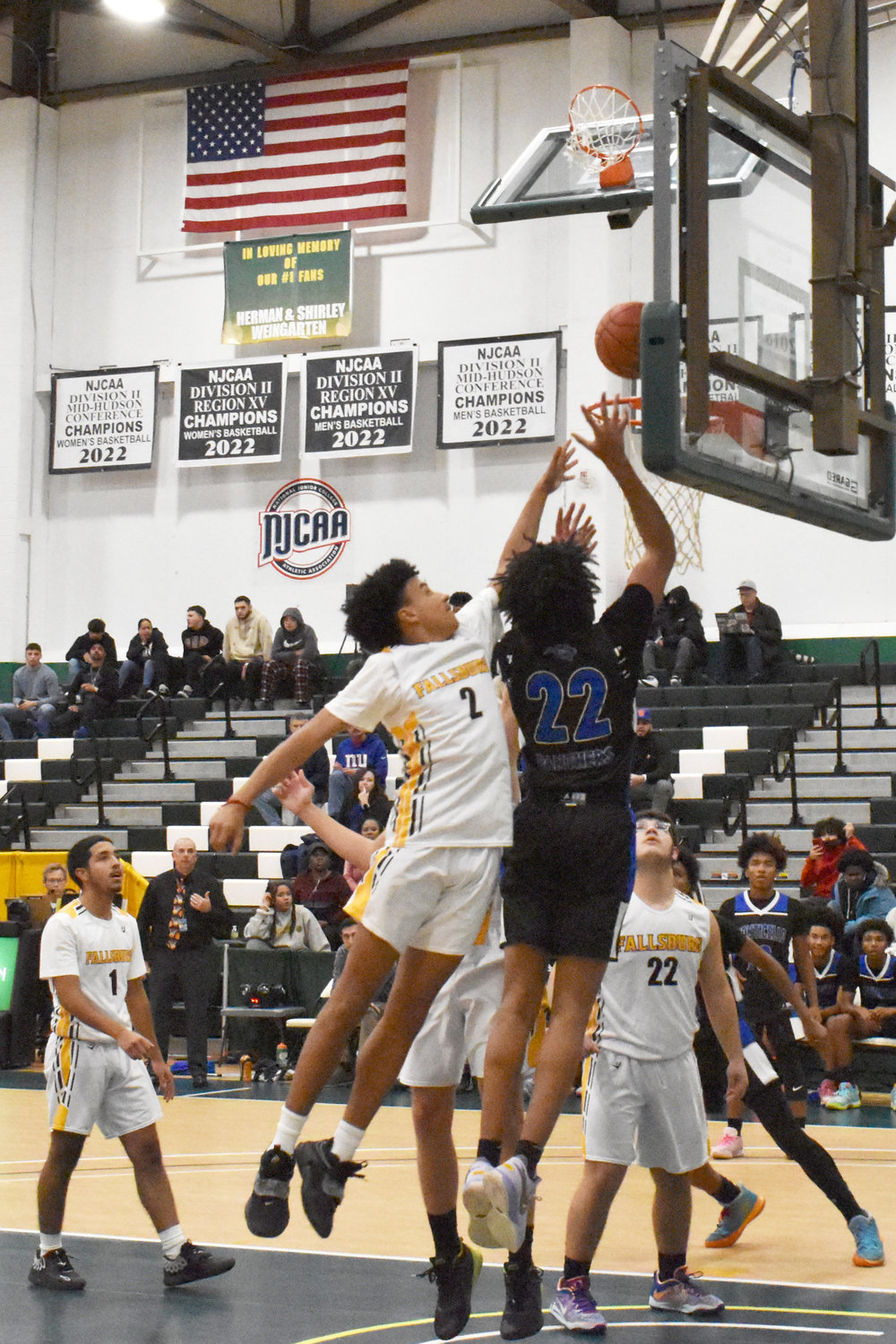 Dylan Hardy goes to the rim for two and is fouled on the attempt. Monticello earned their first win of the season behind an impressive performance from Hardy.
Anthony Morgano | Democrat
Previous Next
Posted Friday, December 9, 2022 6:30 am
Anthony Morgano

LOCH SHELDRAKE – SUNY Sullivan hosted their first game after being named the Number 1 team in the Country for the NJCAA. Unfortunately for the Generals, a Covid-19 ravaged unit fell just short against the Colts of SUNY Orange, and the Generals lost their first game of the season 85-80 after starting a perfect 8-0.

Preceding the SUNY Sullivan game, the Monticello Panthers and Fallsburg Comets competed in a non-league matchup, the first contest between these two teams since 2015.

“SUNY Sullivan put all this together and they did a great job, I’m thankful that they invited us to be a part of it,” Monticello Coach Chris Russo said after the game.

The game between Monticello and Fallsburg was a defensive stalemate between two teams that have no familiarity with each other.

Neither team was able to get much offense going early, and Monticello led 6-1 after the first quarter. By halftime, the Montis had extended the lead to 13, via a 20-7 advantage.

Fallsburg’s offense made some adjustments early in the second half and started the 3rd quarter on a 9-0 run to get within four points of Monticello, but a timeout by Russo helped the Panthers settle down and go on an 11-0 run of their own to end the third quarter with a 31-16 lead.

The two teams exchanged blows in the fourth quarter, but neither team was able to gain any more ground and the score finished off at 45-30.

“It was good for us to go out and get our first win of the season,” Coach Russo said after his team started the year 0-2. “Everyone contributed in the win, and Dylan Hardy really set the tone for us tonight.”

“It was our first game and we were a bit rusty and nervous in the first half, but we settled in,” Fallsburg Coach Lionel White said. “I like our defense and our press. The offense will come. Monticello is a good team, it’s always fun playing them.”

After the conclusion of the Monticello and Fallsburg game, the Generals were center stage as the No. 1 SUNY Sullivan team was set to take on the No. 7 SUNY Orange Colts.

The Generals started the game hot, jumping out to a 15-2 lead against their opponents just three minutes into the game.

However, the Colts had no plan to go quietly, and fought back all the way, outscoring the Generals 35-22 for the rest of the half. The two teams went into the break knotted at 37.

With 20 minutes to play, the two teams began going back and forth in the second half, with neither team conceding a lead of more than four points early on.

Eventually, after leading 59-58, SUNY Orange ran away with an 11-0 run, jumping their lead to 12 with eight-and-a-half minutes to play in the game.

The Generals went down by 15 at one point, but back-to-back threes brought them back within nine points as the minutes ticked away.

Try as they might, the Generals were unable to overcome the late deficit, and ended up losing 85-80.

The short-handed Generals showed a lot of fight, coming back from 15 points down and fighting until the final whistle, but the night belonged to the Colts, and the fans who got to enjoy two great basketball games and a halftime raffle for those who donated new unwrapped toys and non-perishable food items.