Lynn Priebe of Liberty has an odd, fascinating man to thank for the only photo she has of her mother.

Years ago, her mother, Caroline Berthols, sat for Liberty … 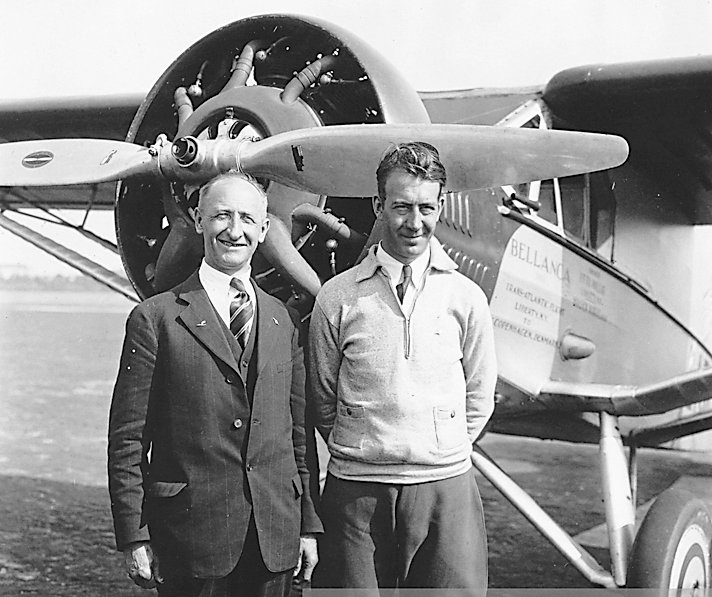 Hillig, at left, and aviator friend Holger Hoiriis made a cross-Atlantic flight on June 24, 1931, leaving from the local golf course on Route 52. The plane was able to attain a top speed of 132 miles per hour, touching down in Newfoundland and proceeding to Germany and Denmark.
Contributed photos 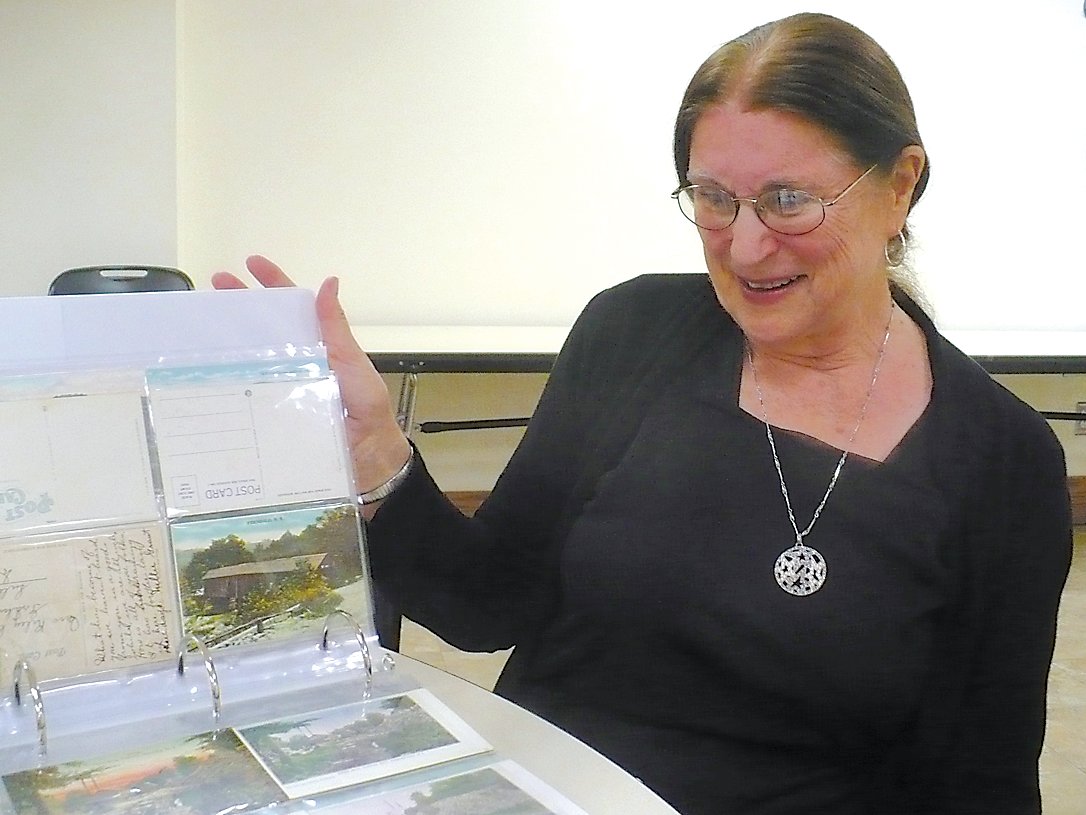 Archivist and researcher Lynn Priebe tells the intriguing story of Otto Hillig to a crowd at Grahamsville’s Time and The Valleys Museum.
Contributed photos 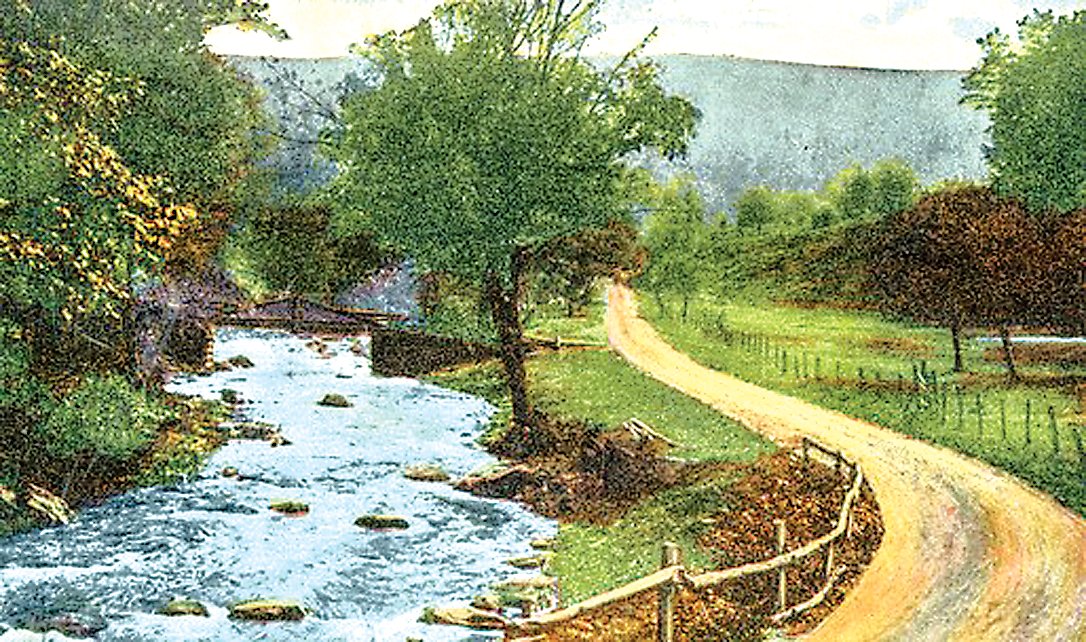 Among hundreds of Hillig’s photos taken during the early 1900s is this landscape of the White Sulphur Springs area. Hillig’s early photos were taken in black and white and then sent to Germany to be colorized.
Contributed photos 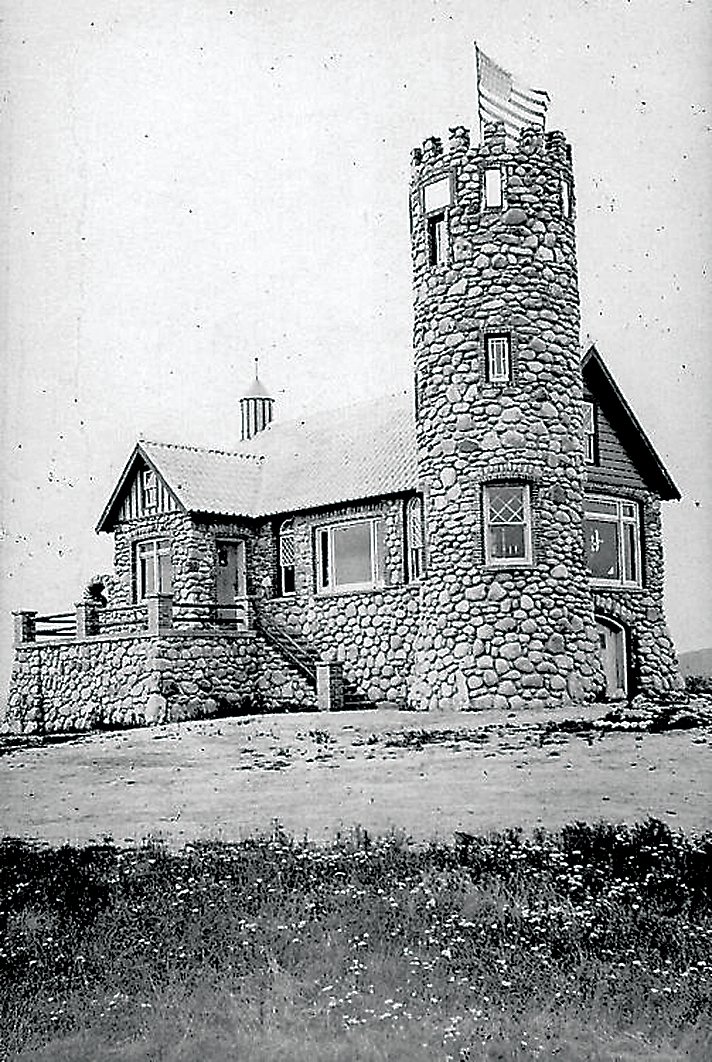 CONTRIBUTED PHOTOs In the early 1930s, Hillig built a home that reminded him of Germany: a stone castle on the top of highest point in Liberty. Made from hand-hewn stones from the Neversink River, the castle was vandalized after Hillig’s death but bears some relation to the original structure and is now privately owned and refurbished.
Contributed photos
Previous Next
Posted Tuesday, October 4, 2022 6:10 am
by Kathy Daley

Lynn Priebe of Liberty has an odd, fascinating man to thank for the only photo she has of her mother.

Years ago, her mother, Caroline Berthols, sat for Liberty photographer Otto Hillig – Hillig who wound up gaining fame as one of the first owners of an automobile in all of Sullivan County and more importantly, as an internationally known passenger on a two-man transatlantic flight from the U.S. to Europe.

The photo in sepia pictures a young girl dressed in her finest. Hillig also photographed Priebe’s father as a child in his first communion suit.

“I’ve always been intrigued by Otto,” said Priebe, who serves as archivist and researcher for the Sullivan County Historical Society in Hurleyville. She’s also a member of the Time and the Valleys Museum in Grahamsville.

So on Sunday, Sept. 25, Priebe went all out at the Grahamsville museum, delighting a roomful of people from around the county with a slide-show of chapters in Hillig’s life.

Born in Germany in 1874, a 16-year-old Hillig arrived alone in New York City, surviving on jobs as a bartender and a trolley car operator until he began heading north. For a while he lived in Ellenville working for a brewery. He later moved to the White Sulphur Springs area and worked on a farm.

At some point, Hillig bought a brownie camera and was off and running in what would be his lifelong profession. Through the years, he had a number of photography studios, including one on Main Street in Jeffersonville.

“He liked to travel to all the towns,” said Priebe.

Largely, though, Hillig is notable for photographing the landscapes, train stations, boarding houses and covered bridges of Sullivan County. His photos were turned into postcards that now remind us what the countryside and small towns looked like years ago.

In the 1920s, Hillig became an early pioneer of aerial photography, taking photographs from a plane while the pilot navigated. One of those photos depicts a sprawling Monticello from the air.

He owned one of the first automobiles in the county, often rushing by at a terrifying 60 miles per hour. Then, with a friend, he made a trip across the U.S. in a car, an uncommon feat at the time.

Last year, New York Governor Kathy Hochul announced that Hillig’s own home had been nominated to the New York State and National Registers of Historic Places.

“Located atop Washington Mountain near the village of Liberty, (a) European-style stone ‘castle’  was completed in 1937 by Otto Hillig, a German immigrant who had gained wealth and national prominence as a photographer of Catskills landscapes from small planes,” said Hochul.

Hillig built the castle after one he remembered from boyhood in Germany. After his death in 1954, the castle fell into disrepair. The redone castle, which still stands between Liberty and Parksville, is now privately owned.

Gov. Hochul also referenced Hillig’s internationally famous achievement in 1931, when he was the sole passenger on a transatlantic airplane flight from the U.S. to Europe. The pilot was a young Danish aviator and friend, Holger Hoiriis. The duo flew from the the Sullivan County Golf & Country Club in June 1931. A plaque at the golf course still memorializes the event.

A few summers ago, a grandson of pilot Hoiriis showed up with some friends to visit the scene of the flight. They stopped off at Liberty Press to chat and the young Dane couldn’t help but point out that “Otto got all the credit,” recounted Jon Heaphy, a longtime staff member at the press shop.

Still, “We do get people every once in a while coming in to ask questions about Hillig,” Heaphy said. “Or some people come in to mention that their parents got their pictures taken here by Otto.”

That, in fact, may be Hillig’s greatest achievement. “He was a crazy character and he wanted to have adventures,” said Lynn Priebe, “but his service to our county was that he recorded the places and people here.”

A devoted member of St. Paul’s Lutheran Church on Chestnut Street, Hillig donated a stained glass window that remains today. He died in 1954, was buried in Liberty Cemetery and left an estate of $100,000 divided among a host of churches, Masonic lodges, relatives and friends.

In the early 1930s, Hillig built a home that reminded him of Germany: a stone castle on the top of highest point in Liberty. Made from hand-hewn stones from the Neversink River, the castle was vandalized after Hillig’s death but bears some relation to the original structure and is privately owned.

Among hundreds of Hillig’s photos taken during the early 1900s is this landscape of the White Sulphur Springs area. Hillig’s early photos were taken in black and white and then sent to Germany to be colorized.