Although Mother Nature reminded us that it is still early spring, no amount of inclement weather could dampen the spirits of those who love trout fishing here in Catskill Mountain trout country! … 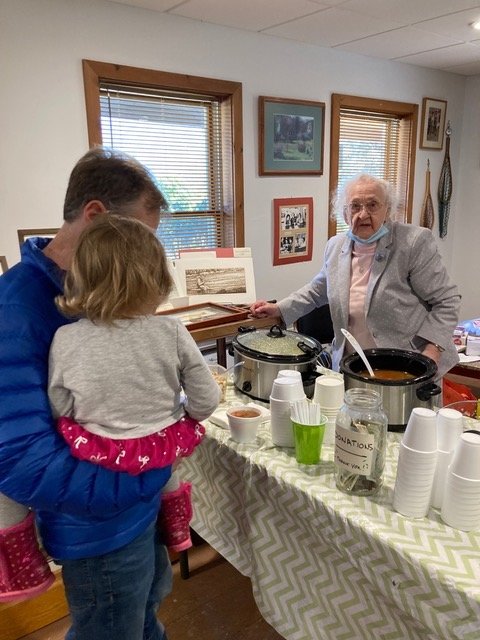 Although Mother Nature reminded us that it is still early spring, no amount of inclement weather could dampen the spirits of those who love trout fishing here in Catskill Mountain trout country! Thursday March 31 was the date of the much-anticipated Anglers Reunion dinner at the Rockland House. Judie Darbee Smith has organized the celebratory dinner, always held on March 31, the night before Opening Day of the trout fishing season, carrying on a tradition that has spanned many decades and originally called the Two Headed Trout and Other Fantastic Fish Stories Round Table, held at the Antrim Lodge since the 1930s. Host Tom Roseo put on a lavish feast of salad, soup, salmon, and prime rib with red potatoes and a great dessert. Despite weather forecasts warning of heavy thunderstorms and possible tornadoes that daunted more than a few out-of-towners from traveling to Livingston Manor and Roscoe, an enthusiastic crowd of 42 came out to enjoy the dinner, beginning with a brief talk by Town of Rockland Supervisor, Rob Eggleton, who reminisced how he and his 3 brothers began fly fishing. As in years past, each attendee received a card with a fly, provided from the supply of flies tied by the late Ron Pidgeon.

April 1 dawned with grey skies alternating between rain, sleet and snow showers that continued all day; following heavy downpours of the prior evening that raised water levels, the Beaverkill at Cooks Falls peaked at about 3550 cubic feet per second, which is above the median average flow on this date of just about 1000 cfs. At 7:00 a.m. only 2 trout fishers braved the blustery 36-degree weather and could be seen standing in the swirling waters of Junction Pool, that most celebrated place where the Beaverkill and Willowemoc intermingle; while a sizeable group of about 20 hardy souls watched from the shore and staved off the cold with hot coffee, juice and pastries from the hospitality tent at Junction Pool.

Saturday provided a welcome respite from the snow and rain for those who participated in the many events of the day. Beginning at 9 a.m., Joe Fox and Kelly Buchta of Dette Flies on Main Street, Livingston Manor, provided bagels and coffee, with guest fly tyers Catskill John Bonasera and Nick Mango and live acoustic guitar music by Mike Konecni. The Roscoe Central School Gymnasium was the next stop, as from 9:30 am till noon Mike Canazon and the Catskill rodmakers hosted a Catskill Cane Revival to a nice crowd of enthusiasts who came to try their hand at casting one of the beautiful rods and learn a bit about how they’re made.

And back upstream on the Willowemoc, the Catskill Fly Fishing Center opened its doors for their annual Season Opener celebration. By noontime hordes of cold and hungry fly-fishers and well-wishers had crossed the bridge that arches over the Willowemoc and made their way to the CFFC gift shop, where 105-year-old Agnes Van Put was ladling out cups of her delicious homemade Split Pea and Beef Vegetable soups, followed by hot coffee and trays of home-baked cookies. New York State Assemblywoman Aileen Gunther stopped at the CFFC as she usually does on Opening Day for an extended visit, and to wish her long-time friend Agnes well. It was a joyful reunion of old friends and fishing buddies that had eagerly awaited the end of the long winter and the beginning of a fresh new season.

The CFFC Museum offered free entry and a new Edward R. Hewitt exhibit, along with many other beautiful displays. Guest fly-tyers Tom Mason and Ted Patlen entertained the enthusiastic group, and the voice of the late Lee Wulff could be heard amid the chatter and storytelling, as his movies were played continuously throughout the day.

The high waters of April are more conducive to fishing below the surface with weighted nymphs, wet flies or streamers; and spin fishermen outnumbered the fly-fishers seen on the Willowemoc and Beaverkill. With the beginning of April not being particularly favorable to dry fly-fishing, it seemed appropriate to mention a few words by the Catskills naturalist, John Burroughs. A contemporary of Henry David Thoreau and friend of John Muir, Theodore Roosevelt and Walt Whitman, Burroughs was born April 3, 1837 in nearby Roxbury. He was a much beloved writer and gained a great following for his observations in the form of nature essays.

Writing about Spring, he is delighted by how full the streams are: “how swift and full they ran! One fancied something gleeful and hilarious in them. And the large creeks,—how steadily they rolled on, trailing their ample skirts along the edges of the fields and marshes, and leaving ragged patches of water here and there!”

He offers his feelings on the month of April, “April is my natal month, and I am born again into new delight and new surprises at each return of it.” And for those who are waiting to go out until warmer weather comes, he advises, “In April all nature starts with you. You have not come out your hibernaculum too early or too late; the time is ripe, and, if you do not keep pace with the rest, why, the fault is not in the season.”