LAKE HUNTINGTON – Muhammad Ali said it better than anyone: “Champions aren’t made in the gym. Champions are made from something they have deep inside of them- a desire, a dream, a … 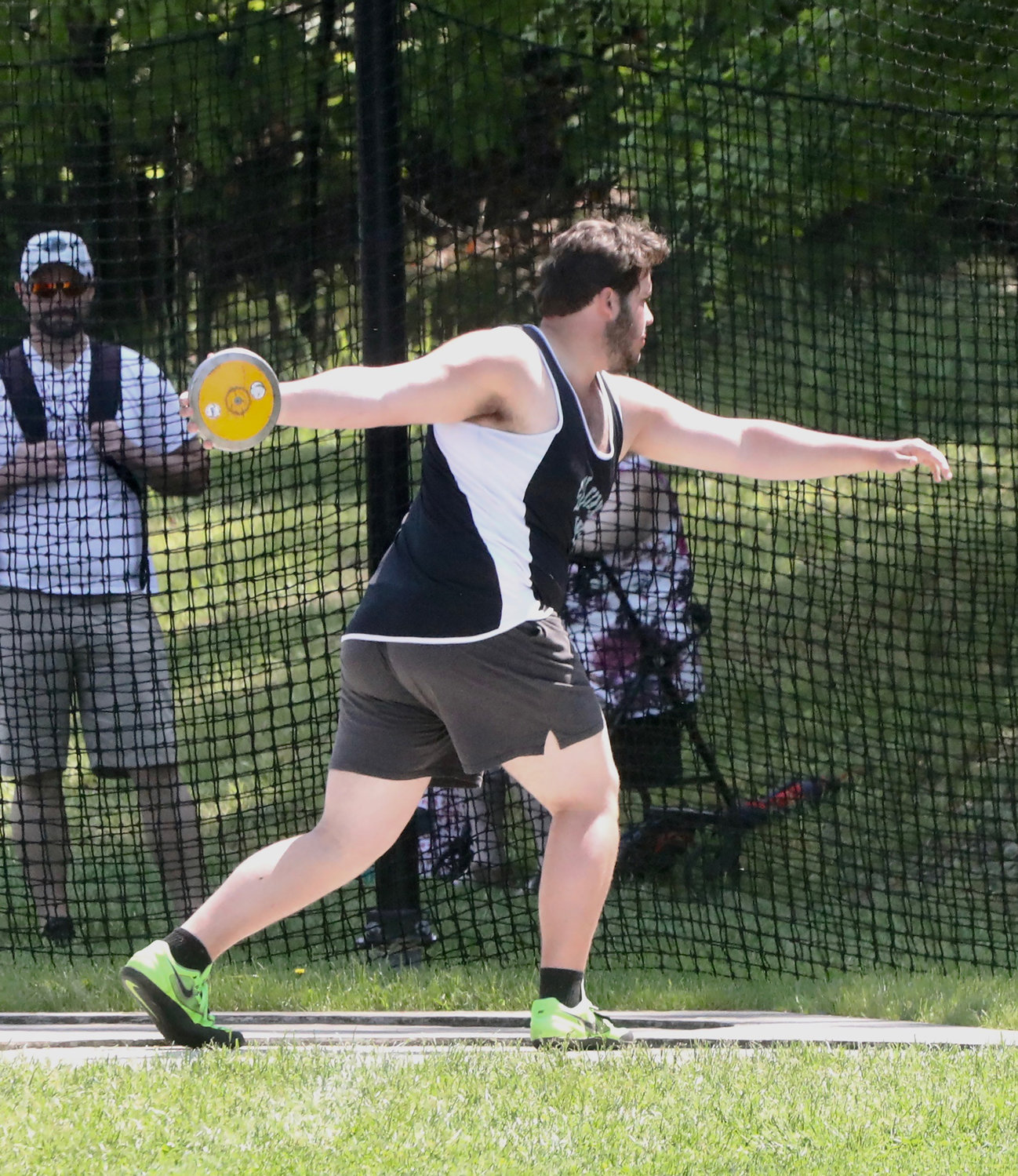 Chris Campanelli shows his winning form in the discus as he captures first place at the OCIAA Championships against the best throwers in Section Nine.
Richard A. Ross | Democrat 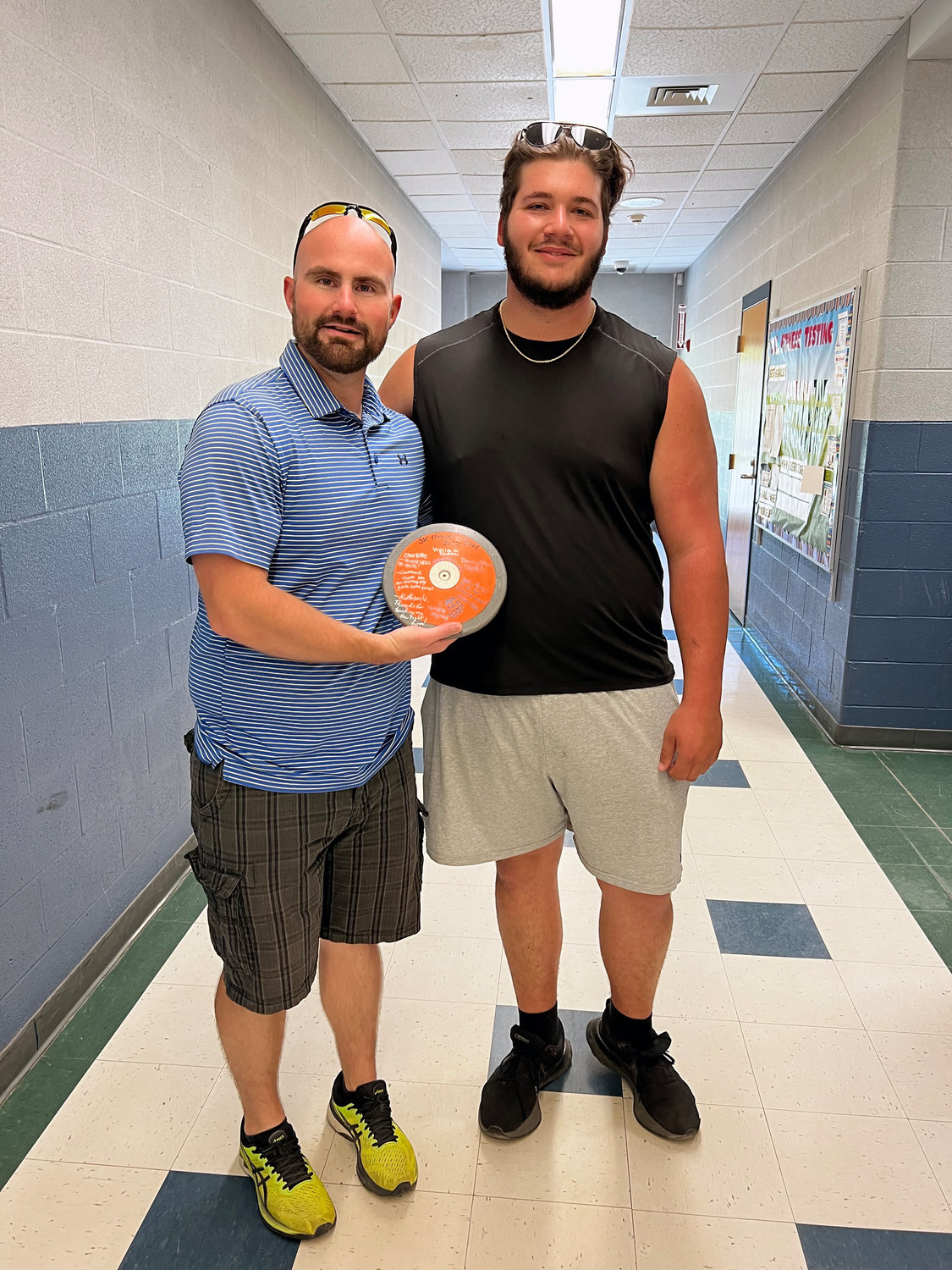 Chris Campanelli presents Coach Steve Rogers with a signed discus as a token of his and the team’s appreciation. Rogers, a former Section 9 champion thrower, was instrumental in Campanelli’s arc of progress. Prior to his emergence as the Sullivan West boys track coach, Campanelli was by and large self-taught.
Richard A. Ross | Democrat 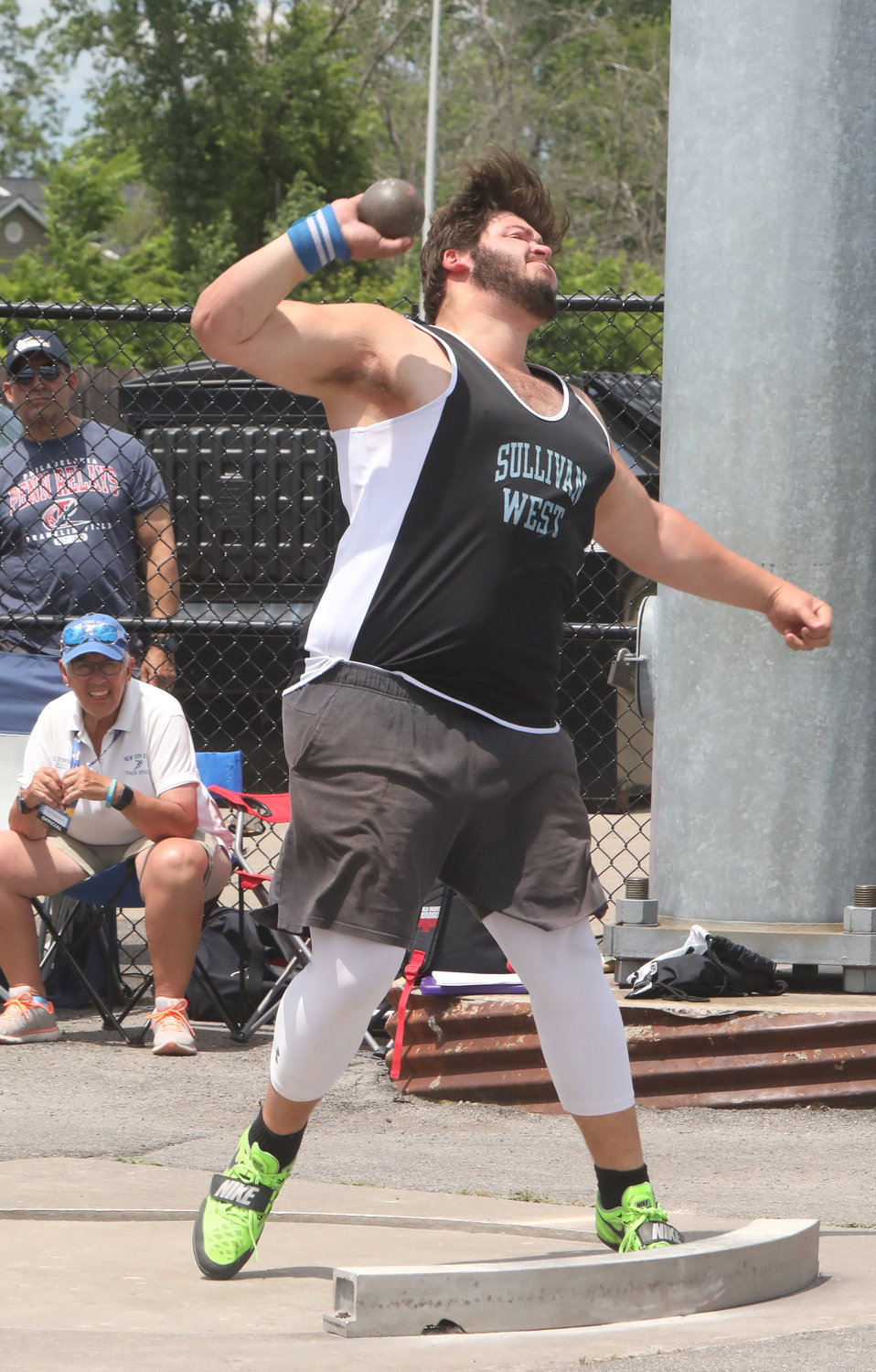 Chris Campanelli finishes third in NYS at the Federation Championships with his lifetime best throw of 53-4.75 in the shot put. It was a perfect way to end his glorious high school career, setting a new school record that is bound to be very longstanding.
Richard A. Ross | Democrat
Previous Next
Posted Tuesday, June 21, 2022 6:20 am
Richard A. Ross

LAKE HUNTINGTON – Muhammad Ali said it better than anyone: “Champions aren’t made in the gym. Champions are made from something they have deep inside of them- a desire, a dream, a vision. They have to have the skill and the will, but the will must be even stronger than the skill.”

Sullivan West senior thrower Chris Campanelli is the embodiment of what Ali referenced as a champion. He proved that once again this spring with his uncanny achievements as a thrower in both the discus and the shot put. As his glorious high school sports career becomes a matter of history, the legacy of his exploits will be emblazoned in the annals of Sullivan West sports archives, along with those of Section 9 and New York State, alongside those from his emblematic football career.

Campanelli capped off his career at the NYSPHSAA/Federation championships with a pair of medals in the shot put. He finished fourth in Division 2 and advanced to compete with the best throwers in NYS in the Federation championship. He took third with a lifelong best throw of 53-4.75 which constitutes a new school record. He was the state meet Section 9 recipient of the Sportsmanship Award, the fourth such honor accorded to a Sullivan West athlete this year, which included Reese Maopolski in Cross-Country, Lucia Kennedy in skiing and Gabby Cohen in golf. Considering the size of Sullivan West in the Section IX universe, that is uncanny.

Campanelli had already broken the longstanding school shot put record which he had upended with this throw of 52-06.75 the day before. Affable and fun-loving, Campanelli, who was dubbed “Big Fella” and “Big Country,” should be more accurately named “Big Heart,” for it is his heart, desire, and unrelenting drive that have propelled him from a season start of 39 feet in the shot put to that 53-4.75 heave on the biggest of stages, the Federation Championship.

There are two essential elements that have defined this meteoric leap. The first and most prominent, is Campanelli’s character. Talking about the enterprise of throwing, Campaneilli notes, “I love it. It’s something for me to work on as an individual. Each set, each personal record (PR) is a goal for me. If I can reach a higher point, I commit, I sacrifice my time. It is my hobby.”

Campanelli’s efforts have been unrelenting as his performances in the season from start to finish attest. One needs only to look at the meet results which consistently placed him first or second in both events and the rising distances from week to week. Campanelli gravitated to throwing as an offshoot of football.

Family has been an important part of his inspiration. “My brothers, especially my oldest brother Nick, have been key. My dad Tony and my mom Deborah have always believed I would break the school record.”

In his freshman year, it was at the suggestion of his football buddies that he come out for track and try the shot and discus. Early on, he was completely self-taught. He watched videos and other competitors. Discus is far more technical and so his success in shot put rose more rapidly. He won the Section 9 title in the shot put as a freshman. Then came Covid-19, which nixed his sophomore year. Last year’s track season ended with a second-place finish in the shot put in the Section 9 Class D championships with a throw of 40-10 and a fourth-place finish in the discus with a mark of 96-03.

However, it was the coaching of Steve Rogers that would come to comprise the second crucial piece in Campanelli’s enormous progress. “Once Coach Rogers took over, my progress skyrocketed,” affirms “Big Heart.”

Campanelli talked about Rogers’ impact on his craft. “At the beginning of the season, Rogers took videos of all of us. He started breaking it down step by step. I always had a passion for throwing and I always wanted to break the school record so each day I practiced what he had taught me to fix, and the next day I would work on the next things he gave me to do. For two months I have been fixing things and getting new things to fix so my progress kept going up and up.”

Campanelli then reflected on his own makeup. “I guess it’s the drive in me. I never took a day off. Even Rogers would say ‘don’t go to the gym tonight,’” but Campanelli said, “Even though I know recovery is a main key, it’s just my drive and desire. I try to sacrifice everything I have. Mindset is a big factor. During competition I still need to work on that. Sometimes I think about the previous throws.”

Rogers said, “Right from the first day I looked at him and told him, you’re going to beat the school record. He was very open to constructive criticism. I would remind him that no one else at meets is competing against you. It’s you against yourself. He has striven for perfection, and I believe he’s gotten close to it.”

Campanelli’s immediate future does not include track as Lackawanna College does not have a track program, and his efforts there will be exclusively devoted to his first love, football.

“Once I transfer after two years, if that school has a track program, I’ll see if I can double up.”

Given his medals in the shot put, one might overlook his discus achievements. At the state qualifier he threw 139-9 and just missed out on a trip to states in that event with his second-place finish.

Campanelli presented Rogers with a signed discus from his fellow SW throwers as a token of gratitude. “There are many times when I wanted to give up, couldn’t get beyond a certain mark or couldn’t get my footwork right. But what I do in those moments is I’d look back and remember how I got here and how far I have come. And I say to myself one more time keep doing it until you’re satisfied.”

Campanelli’s entire experience has been character building. Perseverance, diligence, leadership and an adherence to personal excellence: these are the marks of a champion and a Most Valuable Player.