DANVILLE, IL – The SUNY Sullivan Men’s Basketball Team traveled to Illinois to take part in the National Championship tournament. After punching their ticket in the first weekend of … 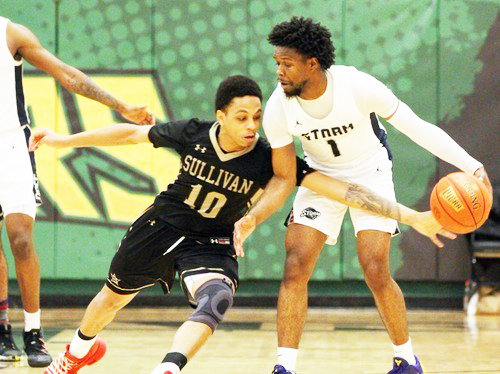 Kareem Welch, the NJCAA Region XV Most Outstanding Player, was a huge asset to the Generals in Illinois. Photographed here attempting a steal on defense.
Contributed Photo
Posted Tuesday, March 22, 2022 6:20 am
Anthony Morgano

Starting off strong, the Generals defeated the No. 14 Dakota County Technical college 75-71 on March 15. They followed that win with a 90-79 victory over No. 6 Cecil College on Thursday.

Unfortunately, they weren’t able to win the second leg of a back-to-back, and were defeated 85-78 on Friday by the No. 2 seed, Davidson-Davie Community College.

Davidson-Davie made it to the championship for the second consecutive year, losing both times. South Suburban finished with a perfect 32-0 record and defeated the Storm.

After the loss on Friday, the Generals played again Saturday against the other Final Four finisher to determine which of them would take third place in the tournament. The Generals got out to a slow start in the first half, and their second half comeback efforts came up just short, and they lost 87-76 to the defending National Champions, Des Moines Area Community College (DMACC).

Although they were unable to win the National Championship trophy this year, the Generals were still able to post a commendable 28-5 record. SUNY Sullivan has continued to be successful over the years, and after strong post-covid season, it seems that the Generals are trending in the right direction.